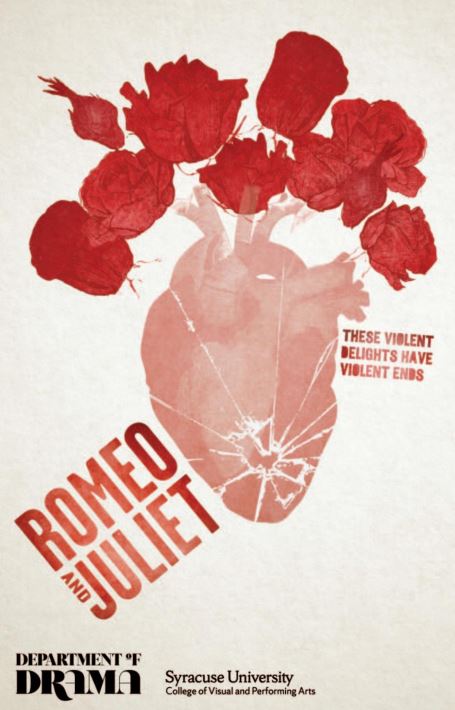 The Department of Drama is beginning the spring semester with William Shakespeare’s “Romeo and Juliet.” Directed by faculty member Thom Miller, this production brings a fresh take to Shakespeare’s timeless classic about a pair of star-crossed lovers. “Romeo and Juliet” previews on Feb. 14 and opens on Feb. 15 in the Archbold Theatre at the Syracuse Stage/SU Drama Complex, 820 E. Genesee St.

First performed at the Globe Theatre in 1595, “Romeo and Juliet” has been subject to countless interpretations. Some of them, such as Franco Zeffirelli’s version from the 1960s, stick to the more traditional style, while others, such as Baz Luhrman’s 1996 film “Romeo + Juliet,” was set in the 1990s. The play has also served as inspiration for other pieces, one of the most notable of which is Leonard Bernstein and Stephen Sondheim’s “West Side Story.”

Thom Miller’s production of Shakespeare’s “Romeo and Juliet” envisions the story about feuding families and forbidden lovers in the present day. Miller describes his production as a “Contemporary investigation of a classical play. We had to ask, what does a family look like in 2020? What does love look like in 2020?” One of the ways that Miller explores these questions is through the gender bending casting of musical theater major Isabel Rodriguez as Romeo and acting major Megan Wilcox as Mercutio. With this casting, the original plot remains intact while also asking us to consider the function of gender in our society today.

In picking the season, Department Chair Ralph Zito made sure to ask “If we are going to do Shakespeare, how are we going do it? What themes do we highlight?” By considering these questions, we allow for a “more inclusive interpretation that allows students to engage with a familiar work in an unfamiliar way.”

In conjunction with the production, the Department of Drama continues its “Salon Series” by presenting a panel discussion and Q&A session, “Brawling Love/Loving Hate: Contemporary Reflections on Discourse and Discord in ‘Romeo and Juliet,’” on Sunday, Feb. 16, at 4:30 p.m. in the Archbold Theatre. The discussion is free and open to the public. No tickets required. Panelists include Kal Alston, professor, Cultural Foundations of Education, and associate dean for academic dffairs, School of Education; Whitney Phillips, assistant professor, communication and rhetorical studies, College of Visual and Performing Arts; Stephanie Shirilan, associate professor and director of undergraduate studies, English, College of Arts and Sciences; and Thom Miller, the show’s director and assistant professor, Department of Drama, College of Visual and Performing Arts.