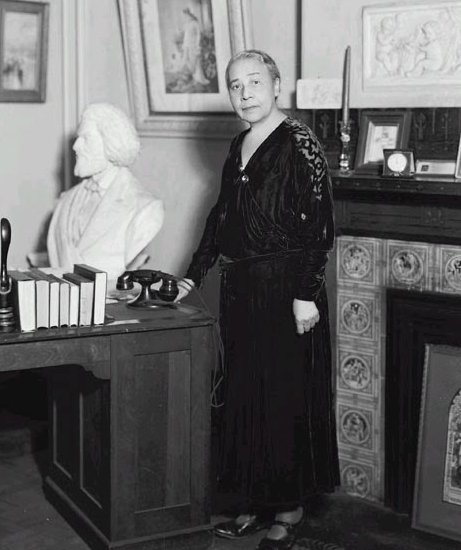 The Humanities Center is hosting a transcribe-a-thon of the writings of activist, educator and author Anna Julia Cooper on Feb. 14.

As an outspoken advocate of abolition and women’s rights, Frederick Douglass gladly accepted an invitation to the first Women’s Rights Convention in Seneca Falls, New York, in 1848. It was events like this, and being part of the “Underground Railroad,” that made Upstate New York, a hotbed for social justice and equality in the 19th century. Today, the Syracuse community can play a role too, by literally preserving history. On Frederick Douglass Day, Feb. 14, a day which celebrates Douglass’ many contributions as an author, preeminent orator and social reformer, the Humanities Center is partnering with the Colored Conventions Project to host a local transcribe-a-thon of the writings of Anna Julia Cooper as part of a national day of service.

Born into slavery in 1858, Cooper became the fourth African American woman to earn a doctoral degree when she received a Ph.D. in history from the University of Paris-Sorbonne in 1925 at the age of 67. Cooper was a visionary black feminist leader, intellectual, activist and educator: her most widely known book is her 1892 volume, “A Voice from the South by a Black Woman of the South.”

The transcribe-a-thon will digitally preserve other examples of Cooper’s writings and life work for future generations to enjoy and learn from. Students, faculty, staff and members of the community are invited to sign up for one or more half-hour time slots, between noon to 3 p.m., Feb. 14, in the Peter Graham Commons, 114 Bird Library. Participants will use computers to read Cooper’s documents online and type up the content into a digital database. Materials will include Cooper’s papers, notes, diaries, newspaper articles and more from Howard University’s Moorland-Spingarn Research Center archives. The transcribe-a-thon is part of an emerging field known as digital humanities, where digital tools are used in the practice of humanities research.

“Cooper’s ideas were groundbreaking,” says Vivian May, director of the Humanities Center and professor in the Department of Women’s and Gender Studies. May, author of “Anna Julia Cooper, Visionary Black Feminist: A Critical Introduction,” has published many articles about Cooper and her ideas, and even worked with the USPS to help craft the wording for Cooper’s first-class stamp in 2009. She continues, “Cooper was known for her advocacy for a liberal arts education for Black students, one that would free the mind, was culturally relevant, would raise consciousness and prepare one to combat inequality.”

The Humanities Center is hosting the transcribe-a-thon in collaboration with Professor Joan Bryant and the Department of African American Studies; professors Dorri Beam and Patricia Roylance and the Department of English; Petrina Jackson, Special Collections Research Center director, and the SU Libraries; and the departments of History and Writing Studies, Rhetoric, and Composition.

If you are interested in participating in the transcribe-a-thon, contact humcenter@syr.edu by Feb. 7 and include any accommodation requests. Personal laptops are welcome but not required. The transcribe-a-thon will be accompanied by a livestream of brief talks and performances from Howard University. For more information, visit Humanities Center’s Frederick Douglass Day of Service.