Applications are being accepted now through Feb. 7 for the Atlantic Coast Conference (ACC) InVenture Prize 2020. The InVenture Prize is a televised “shark tank” competition open to student startup teams from the 15 colleges and universities in the ACC Academic Consortium. Student teams must submit the online application and a one-page executive summary of a venture idea to participate in Syracuse University’s campus qualifier, which will be held on Feb. 21 from 2 to 6 p.m. in Bird Library. The winner of the Syracuse University campus qualifier will receive a $5,000 cash prize, sponsored by M&T Bank, and an all-expense-paid trip to participate in the live televised event in April at North Carolina State University in Raleigh. The competition is open to undergraduate students or students who have received their undergraduate degree within the past year and who are the original creators, inventors or owners of the intellectual property underlying their invention. 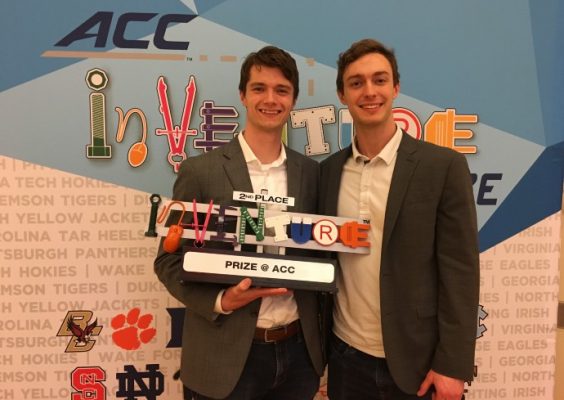 Last year’s campus winners, Quinn King and Alec Gillinder, co-founders of MedUX. King and Gillinder went on to win second place in the ACC finals. Since then, their venture has taken off, secured investment and will soon launch commercially.

“I believe that in the modern era, anyone can start a scalable, high-growth company and every metropolitan area should have a thriving startup community,” said M&T Bank Regional President Allen Naples. “By helping Syracuse University host the InVenture Prize Challenge, we’re investing in the exceptional creativity and ingenuity of our students and doubling down on our efforts to build our entrepreneurial community into one that generates jobs and prosperity for generations to come.”

Last year, Syracuse University campus winner MedUX went on to compete in the finals at North Carolina State University. MedUX co-founders, Alec Gillinder ’20 and Quinn King ’20, both College of Visual and Performing Arts School of Design students, won second place overall, including a $10,000 prize. The MedUX product is a wearable, portable intravenous delivery solution. Developed at Invent@SU and commercialized through the Blackstone LaunchPad powered by Techstars at Syracuse University Libraries, the team filed two provisional patents and one full patent. They are now in a joint venture with a global company to commercially launch by summer 2020.