Share
Office of Veteran and Military AffairsSchool of Information Studies 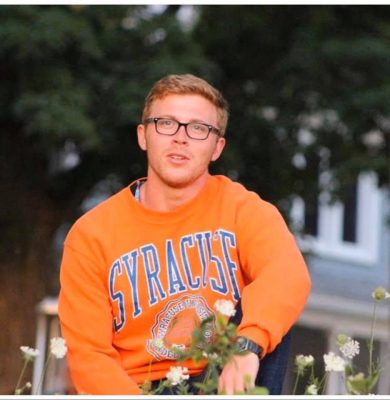 Every student at Syracuse University has their own unique story, whether they enroll straight out of high school or as a non-traditional student returning to begin a second career. Some students overcome serious challenges; some attend as part of a Syracuse family legacy.  For Oliver Posewitz ’20, a senior in the School of Information Studies, it was a bit of both.

Before attending Syracuse University, Posewitz served six years in the U.S. Navy, a decision influenced by his time on the water as a kid.

“My family used to vacation up on the St. Lawrence river every summer,” Posewitz says. “I remember seeing this big boat on the river, and it had a really big machine weapon on the back of it. And I just thought that was really cool. Over the years, my friends and I would talk about the military, and I finally decided it was what I wanted to do after high school.”

In the Navy, Posewitz served as an air traffic controller, a high-stress and demanding job that has a high attrition rate, at the Naval Air Technical Training Center in Pensacola, Florida. Despite enjoying his military career, he knew it wasn’t what he wanted to do forever. When it was time to transition out, Posewitz decided Syracuse was the obvious choice for his academic goals.

“I was getting out of the Navy and looking into where I wanted to go to college. I had read somewhere that Syracuse University was one of the best private schools for veterans and just happened that it was near home,” he says.

When Posewitz first stepped foot on campus, he was following in the footsteps of his grandmother, also a Navy veteran from the World War II era as a member of the U.S. Naval Reserve Women Accepted for Volunteer Emergency Service, or WAVES. Upon the conclusion of WWII, she was a part of the “GI Bulge” that rapidly grew Syracuse University’s enrollment numbers and propelled it from a regional liberal arts college into a nationally renowned private university.

Carrying his grandmother’s legacy isn’t all Posewitz brings with him to his classes; his father also served as inspiration for him to pursue higher education.

“A few months into the Navy, I went home on leave and my father passed away,” Posewitz says. “I felt a college degree would be sort of a resolution. He never really pushed college on me even though he had gone to college when he was young. He was just always excited and supportive of me regardless. So that played a huge role in it, just reaching that sort of conclusion after he passed.”

Posewitz’s time at the University has also been enriched by internship opportunities. Using his knowledge from his coursework in applied data science, he landed an internship last summer with First Data, now Fiserv, and will intern with General Electric after the spring semester.

Like many students, though, Posewitz found the transition from military to student life to be a challenge. He found solace in the various organizations on campus specifically for veterans.

“There are so many groups to help veterans here,” Posewitz says. “The Office of Veteran and Military Affairs, the Institute for Veterans and Military Families, the Student Veterans Organization, the Office of Vet Success. It’s a little overwhelming at first, but soon you learn who does what. Since veterans can get a sponsor when they come here, I had someone who showed me around and taught me how to navigate everything. The support here is unmatched.”