The production control rooms in Newhouse 2 were buzzing with all the usual pregame activity as two teams of students and broadcasting pros prepped for last Thursday’s women’s basketball game against Georgia Tech.

As an updated run-of-show was hurriedly distributed, on-air talent was expertly outfitted with mics, and graphics and video packages were prepared on an impressive display of computer and television screens, the casual observer could see that this was just another day at the office for those producing the game and accompanying studio shows, which broadcast live on the ACC Network Extra.

The thing that made it special? Pretty much everyone calling the shots for this particular production happened to be female. 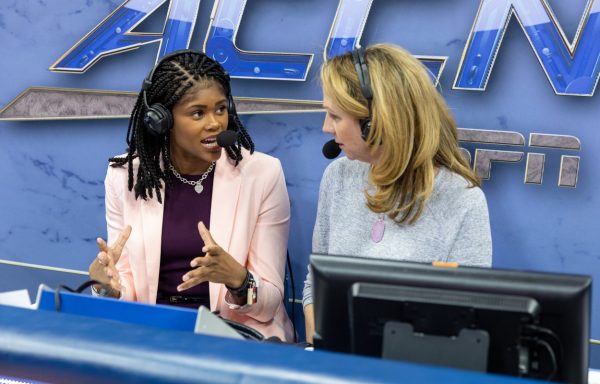 But don’t think this production was a gimmick or a one-off. Thursday night’s crew was a reflection of a simple truth: more and more females are pursuing sports broadcasting, both behind and in front of the camera, and especially at Syracuse University. 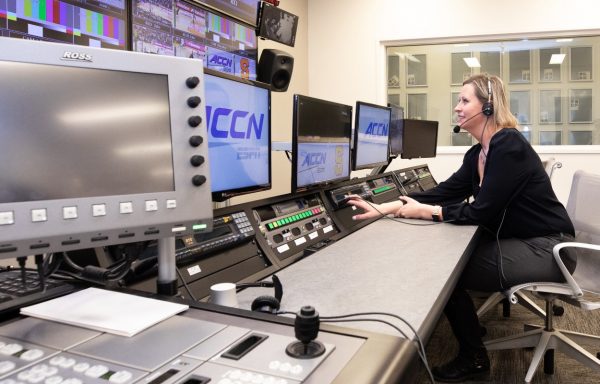 Olivia Stomski ’01 in the production control room at the Newhouse studios.

“When I graduated from the Newhouse School in 2001 and walked into a production truck, there were no women in that truck,” says Stomski, reflecting on how the industry has changed over the past 20 years. “Now we have a whole team of female students who have these opportunities and work in these roles every day. This is just a chance to highlight it and shine a light on their achievements.”

“The whole environment has changed for women in production, women within talent space, women in sports in general,” echoes Meg Aronowitz, a coordinating producer who has spent her career working in college sports at ESPN. “And it’s not because of diversity and inclusion—it’s because of talent and acceptance and opportunity.”

As Hennessey, Stomski and others were putting together the Jan. 16 women’s basketball broadcast schedule several weeks back, it organically shaped up to be a mostly female crew, with women in all leadership positions. That’s when they decided to make a couple of phone calls to see if Mowins and Young were available to return to Syracuse and call the game, elevating the significance of the occasion.

“Beth is not only a Syracuse graduate but one of the most accomplished play-by-play people in the industry,” says Syracuse Director of Athletics John Wildhack. “And Isis, as a recent grad with a budding career in sports television, having them both back on campus to call the game was really special.”

But, according to Hennessey, behind every on-air announcer are about 30 others—meaning there’s a lot more opportunity behind the camera than in front of it. “It’s great to have two females on the court so that everybody can see them,” she says. “But behind them there’s a staff of many.” 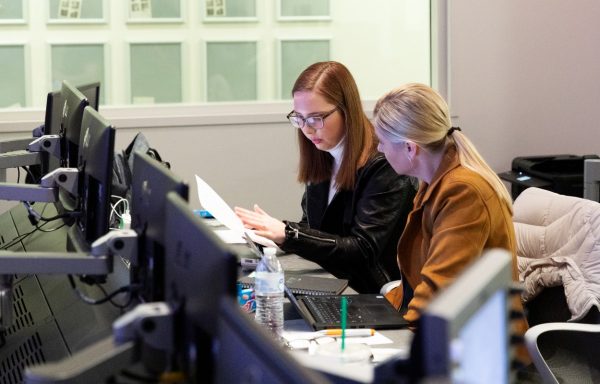 Graduate student Kara Hitt is one of those many. She worked as associate director of Thursday night’s game alongside Hennessey and others in the production control room at Newhouse 2.

“While having a lot of females in the control room is pretty typical of a Syracuse University broadcast, it was fun to have the opportunity to celebrate it,” Hitt says. She felt honored to have been part of what she called “a historic night” on the 16th. “For us, this is what we do and love to do, game in and game out. But to be able to do it all together and highlight the amazing work of these women was a special day that I won’t soon forget.”

Junior Mackenzie Pearce produced the studio shows under the oversight of Stomski, and Pearce estimates that she’s already been involved, in some capacity, with over 100 broadcasts. Pearce says she was a bit surprised when she learned that having an all-female “front bench” (defined as producer, director, technical director, associate director) for both the game production and studio production was something that hadn’t happened before.

“It feels like it’s been a long time coming,” she says. “All of the women involved in this production have worked in these roles before, have earned these roles, and have worked hard to get here.” 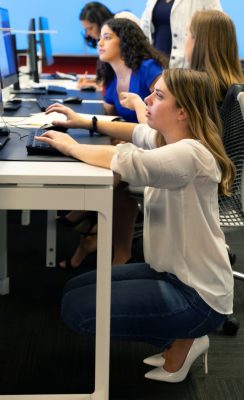 Producer Mackenzie Pearce ’21 preps for the pregame and halftime broadcasts, with on-air talent Nicole Weaving ’20 and Jenna Fink ’21 nearby.

The experience students gain in sports media at the Newhouse School is unparalleled, due largely to the school’s strong partnership with Syracuse Athletics and, by extension, ACC Network. Syracuse is the only university to produce live studio shows for ACC Network, all completely student-run, and everything is done at ESPN-caliber production standards.

Mowins, who earned her master’s degree at Newhouse in 1990 and has worked for ESPN since 1994, says that because of the supportive environment at Syracuse, females can do pretty much any job in sportscasting so long as they have the skill set.

“Syracuse has really been at the forefront of the growth of females in this industry,” she says. “Newhouse students are provided so many opportunities in the classroom, outside the classroom and around town to really get a lot of practice and hone their craft.”

Young is just one semester removed from being an Orange student-athlete, so the vast industry exposure she received at Newhouse during her graduate career is fresh in her mind. “I’ve been in the studio, I’ve been an analyst, I came up with and hosted my own show where I interviewed my teammates, I’ve been a sideline reporter, I’ve worked with ACC Network,” she says. “I put the work in and had people around me who believed in me and supported me, and it has clearly paid off.”

This was Young’s first time analyzing a game in a professional, not student, capacity. And she says there’s no place she would have rather done it than ’Cuse: “This is my college home. I feel comfortable here. And it was a great opportunity to call two excellent teams.”

According to Stomski, when students—regardless of gender—come through the Newhouse School with a focus on sports journalism, they leave on the fast track to a successful career in sportscasting.

“They’re graduating with real-life experience and, because of that, they’re not necessarily starting their careers on the ground level,” she says. “They’re starting in the middle, because it says on their résumé that they’ve produced 25 or 35 or 45 studio shows that have aired on ESPN.” 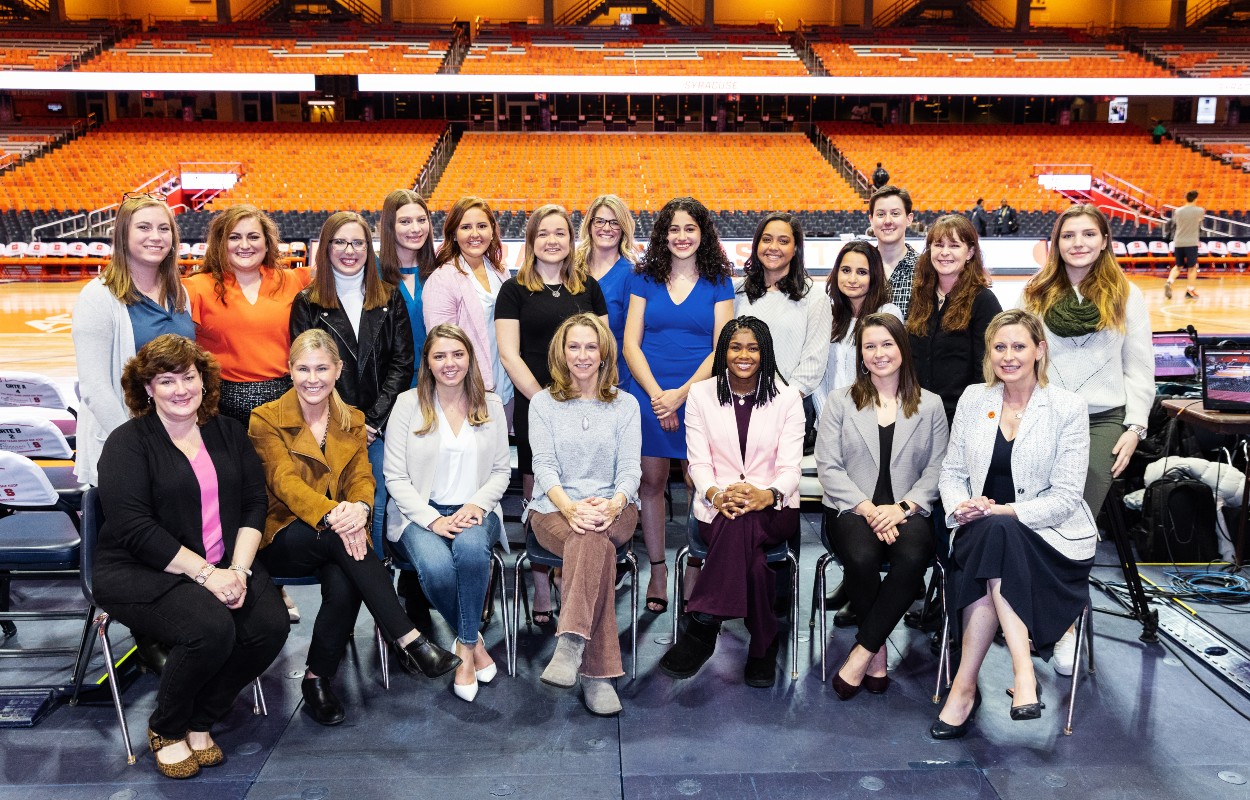 The Future Is Female

While they’re proud to have more women than ever in the control room and happy to honor this groundbreaking moment for women in sports broadcasting, Stomski and others look forward to a day when a female-dominated broadcast isn’t something to be celebrated, but simply the norm.

“This broadcast shows the next generation of women that this is attainable, that a crew full of females doesn’t have to be some pie-in-the-sky idea,” adds Hennessey. “This can become the norm within all broadcasts.” 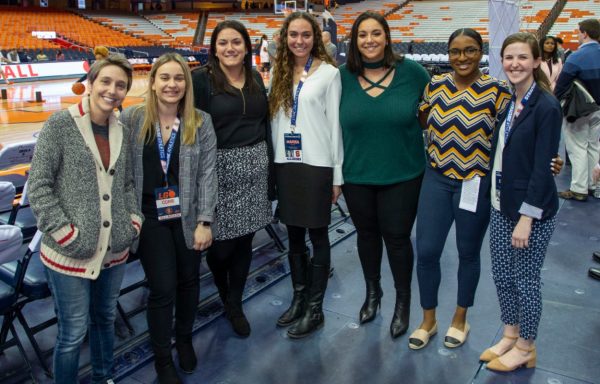 “It’s going to become commonplace because women have earned the right to be in these positions,” says ESPN’s Aronowitz. “They have the knowledge and experience, and they work their way up to sit in those chairs and call those games and do those jobs.”

Young couldn’t agree more. “I would love to come back for another all-female broadcast and have no one mention it because it’s just what we do now,” she says.

But on the night of the 16th, if even for a couple of moments during the hustle of the game production, they’re celebrating.

The 20 women involved in the broadcast gathered on the court of the Dome for a group photo before everyone went their separate ways to make the magic happen. After the photo, they huddled close and in true teammate spirit went hands-in: “1…2…3…LADY GANG!”

“I hope this production inspires young women and sends the message that if you love sports and you love television that you can accomplish anything you want,” says Wildhack. “And you can do it right here at Syracuse University at the Newhouse School.”