The staff at Ernie Davis Dining Center have come a long way. Wednesday, Jan. 15 marked 10 years of operation for the campus’s busiest dining center, and many of the staff on duty for the dinner celebration have been there since day one. 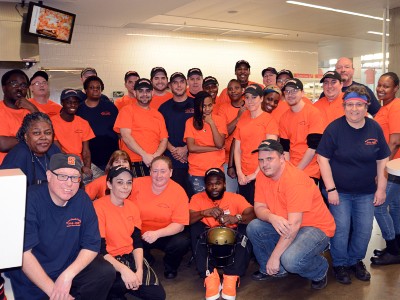 They’ve served 6.5 million meals to Syracuse University students in the 10 years of the center’s existence. It’s by far the most-visited dining center on campus, serving roughly 650,000 meals in 2019. In a distant second place is Sadler Dining Center, with 480,000 meals served last year.

The staff celebrated Wednesday night with special t-shirts marking the occasion, with those that had been there from the beginning sporting the additional phrase “Original Team Member.” A special carved rib roast was on the menu, prepared and served by many of the same people who had cooked and served the very first meals at the center back in January 2010. Staff and students also enjoyed cake and milkshakes as part of the celebration. Even Otto the Orange stopped by to pose for pictures and to take a look at a photo retrospective set up along the center’s glass walls.

The friendly faces at the entrance, longtime Food Services employees Dom Valentino and Nicole Ugoji-Morrissette, were still on duty, swiping I.D. cards as students entered for the dinner rush. They’ve been at Ernie Davis since it opened, along with 13 others on the staff.

Ernie Davis Dining Center employs 48 Food Services staff members, and anywhere from 120-165 student employees, says Stephen Brandt, Food Services manager. It’s more than most other dining centers, because Ernie Davis deals with a much higher volume than the other centers.

Dinner tends to be the busiest meal, Brandt says. On an average day, Ernie Davis will have 1,400 swipes during the lunch period, but its all-time record is 2,197 at lunch during the first week of class in August 2019.

“We’re so proud of our team here,” says Brandt. “Six and a half million meals over the years is an impressive feat. That’s a lot of chicken tenders!”