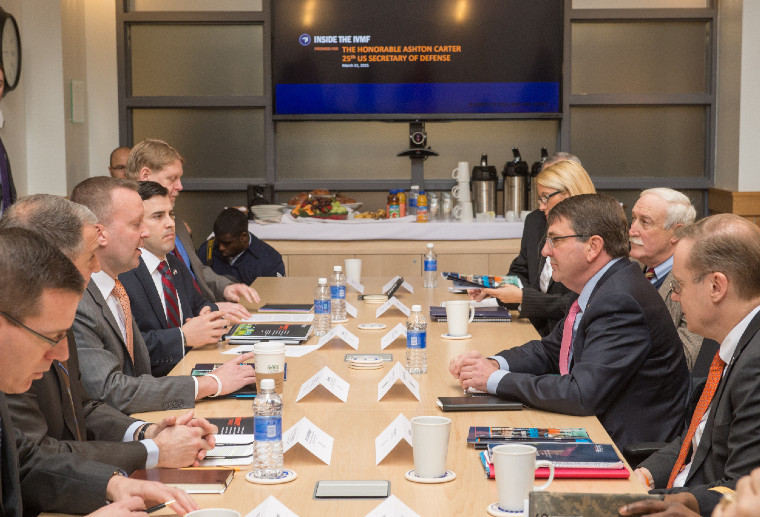 Mike Haynie (third from left) and Nick Armstrong (fourth from left) meet with (from right) Chancellor Kent Syverud, the 25th U.S. Secretary of Defense Ashton Carter and Sean O’Keefe, among others on campus.

Mike Haynie, vice chancellor and founder of the Institute for Veterans and Military Families (IVMF), has been named to the prestigious HillVets100 list for 2019. The HillVets100 is an annual listing of the nation’s 100 most influential veterans, service members and veteran-community advocates. Joining Haynie on the list this year is Nick Armstrong G’08, G’14,  senior director of research and analytics at the IVMF.

HillVets is a nonprofit organization based in Washington, D.C., that works to facilitate collaboration and leadership opportunities in support of veterans interested in engaging in policy, politics or government. The annual HillVets100 listing is designed to highlight and recognize the most impactful and influential change-makers and advocates within the veteran community across the United States.

“I am proud and humbled to be included among the diverse and inspiring group of honorees recognized on the HillVets100 list,” says Haynie. “It is with a special pride that I share this distinction with my friend and close colleague Dr. Armstrong. To have two members of the Syracuse University community included among this distinguished group of influencers and advocates is a testament to the work and commitment of our University to positively impact the social, economic and wellness concerns of the nation’s veterans and families. To be recognized in this way is humbling, and it’s an honor that Nick and I agree belongs to the entire Syracuse University community.”

Shortly after arriving at Syracuse University in 2006, Haynie created the Entrepreneurship Bootcamp for Veterans with Disabilities, a program to provide business ownership training to traumatically injured veterans. Five years later, Haynie launched IVMF. Funded almost entirely by external grants and philanthropy, since its inception, the IVMF has provided no-cost educational, vocational and community-based social service programs impacting more than 132,000 veterans and family members. Haynie is frequently asked by Congress to testify on policy issues impacting veterans and was twice selected by the Obama administration to chair federal advisory commissions tasked with spearheading transformation and reform at the U.S Department of Veteran Affairs and the U.S. Department of Labor.

Armstrong is a graduate of the U.S. Military Academy at West Point. At the conclusion of his military service he came to Syracuse University, where he earned a Ph.D. from the Maxwell School of Citizenship and Public Affairs. Today Armstrong directs the IVMF’s broad portfolio of social science and policy research, program evaluation and data analytics initiatives. Due in part to Armstrong’s leadership, in 2019 the IVMF was responsible for more than 30 percent of the total externally sponsored research and programmatic funding generated by Syracuse University’s academic enterprise. Recently, in close partnership with the Maxwell School, Armstrong co-led the development and launch of a new initiative, the Veterans Program for Politics and Civic Engagement, designed to create pathways into public service and elected office for veterans.

Armstrong and Haynie, along with the other members of the 2019 HillVets100, will be honored at the annual HillVets Tribute Gala in Washington, D.C., on March 25. Proceeds from the event support the HillVets House Fellowship and HillVets LEAD programs, both of which provide fellowships, leadership training, mentorship and a variety of other resources positioned to empower veterans to continue their service through careers in government, international affairs, policy and politics.

Syracuse University’s legacy of service to veterans goes back to World War II, when Chancellor William Pearson Tolley opened the doors of the University to more than 10,000 veterans returning home from war. Chancellor Syverud reaffirmed that commitment when he arrived in 2014 and as a result, today Syracuse University is ranked by The Military Times as the #1 private university in America for veterans.

In April, Syracuse University will extend and enhance its legacy of service to America’s veterans, with the opening of the Daniel and Gayle D’Aniello Building, home to the Syracuse University National Veterans Resource Center (NVRC). Funded entirely by external grants and philanthropy, including a historic $20 million gift from Dan and Gayle D’Aniello, the NVRC represents a first-of-its kind academic center of excellence, focused to engage the academic community to address the social, economic and wellness concerns of the nation’s veterans and military-connected family members.