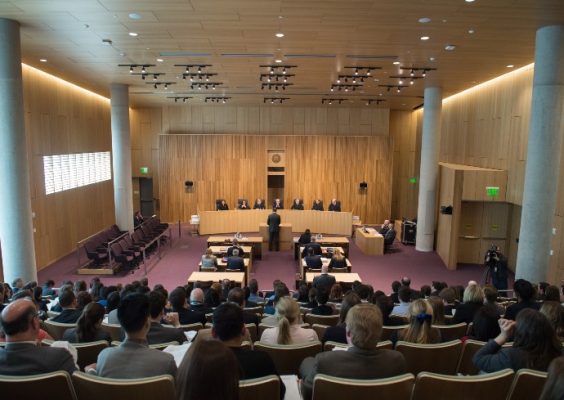 The United States Court of Appeals for the Second Circuit will hear oral arguments in the Melanie Gray Ceremonial Courtroom in the College of Law’s Dineen Hall on Monday, March 23, at 10 a.m. Details on the cases to be argued will be made available closer to the event date. The three-judge panel for the March 23 sitting will be announced the week before the arguments.

The Second Circuit Court of Appeals sits in New York City at the Thurgood Marshall U.S. Courthouse in lower Manhattan. Three appellate court judges sit on each case panel, except for en banc appeals on which the full court sits. The appellate court hears appeals from the six district courts (in Connecticut, New York and Vermont) within the circuit.

Previously, the College of Law has hosted the New York State Court of Appeals and the United States Court of Appeals for Veterans Claims in Dineen Hall’s state-of-the-art Melanie Gray Ceremonial Courtroom.

“Hosting live court proceedings in our building gives our students a tremendous opportunity to see the law in action at a very high level,” says Lauryn Gouldin, associate professor of law and associate dean for faculty research. “We are grateful to have this opportunity to host the Second Circuit in Dineen Hall. This will undoubtedly be one of the highlights of the spring semester for our students.”

The proceedings are open to the public.