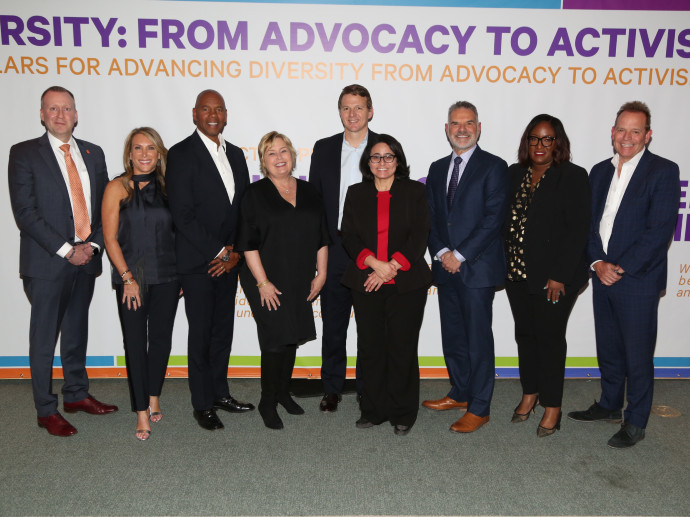 Syracuse University’s Institute for Veterans and Military Families (IVMF) was named one of eight 2020 inductees to the Advancing Diversity Hall of Honor yesterday at the annual Consumer Electronics Show (CES) in Las Vegas. Vice Chancellor Mike Haynie, founder and executive director of the IVMF, accepted the honor at a ceremony attended by industry leaders, educators and diversity advocates from across the U.S. and the world.

Jack Myers ’69 (Newhouse), founder and chairman of MediaVilliage, says, “Each inductee has made an important contribution to building a more diverse business community and society. They’re continuing to make a difference and are advancing our industry’s leadership.” According to Myers, “More than 500 leaders, educators and aspiring professionals, including many of our prior inductees, came together at CES to acknowledge and learn from their successes.”

Joining the IVMF as 2020 inductees to the Advancing Diversity Hall of Honor are Publicis Media, the Muslim Public Affairs Council, ADCOLOR, Walt Disney Television and Sam’s Club. The hall has previously recognized changemakers from such well-known companies as the National Basketball Association, Verizon, Proctor & Gamble, Unilever and Nielsen.

“We are humbled and honored to be recognized for our efforts to prioritize and advance diversity as a core value of the work we do at the IVMF,” says Haynie. “Candidly, our work to advance the social and economic concerns of veterans is inextricably linked to advancing diversity in all its forms, given the broad diversity represented by those women and men who volunteer for military service. Forty percent of those who serve in the military represent racial or ethnic minorities, and the population served and supported by the IVMF aligns with that reality.”

In partnership with Sundance Institute Theater Program, the Hall of Honor program included an immersive engagement experience designed for honorees and attendees to share best practices and solutions for “advancing diversity from advocacy to activism.”

“Since its inception in 2011, the IVMF has provided no-cost upskilling, vocational training and business ownership programming to more than 130,000 veterans and family members,” says Maureen Casey, the IVMF’s chief operating officer and a member of the University’s Council on Diversity and Inclusion. “We’ve worked hard to successfully position the inherent diversity that stems from recruiting and hiring veterans as a competitive advantage for the IVMF’s employment partners—firms like Starbucks, Google, Accenture, Walmart,  JPMorgan Chase and many others. Consequently, we’ve been afforded the opportunity to play a small but meaningful role in advancing diversity in the workplace, in our communities and across society.”

“Our longstanding efforts to open the doors of Syracuse University to veterans has also contributed directly to advancing diversity at our University. Currently 40 percent of the roughly 1,400 veteran and military-connected student enrolled in degree programs at Syracuse University identify as non-white, and 62 percent of student veterans are the first in their family to attend college,” says Haynie. “The diversity reflected by the veteran’s community aligns powerfully with the University’s longstanding commitment to creating opportunity for both historically under-served populations, and for non-traditional students.”