Military-Connected Student of the Month: Hanna McNabb ’21, One of Just 200 Special Program Soldiers

When Syracuse University junior Hanna McNabb was growing up, she envisioned herself serving her community behind a badge as a law enforcement officer. Like many other kids in her hometown of Boise, Idaho, McNabb spent her time outdoors, staying busy with various outdoor activities or sports. 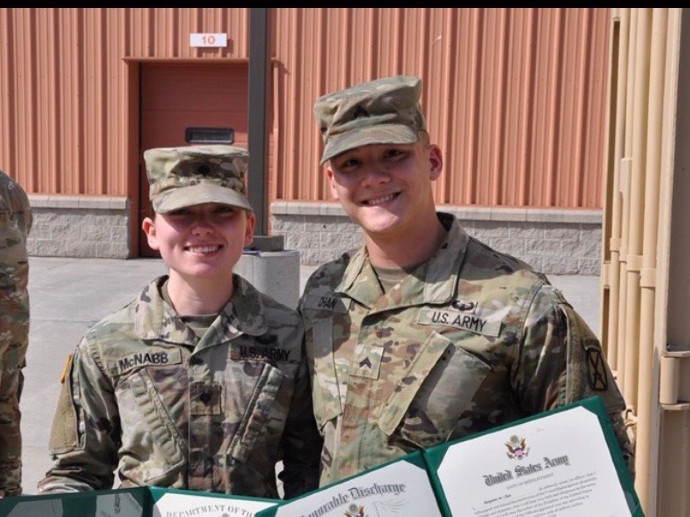 “I tried almost every sport there was to offer in my town,” says McNabb. “Most of them just didn’t hold my attention so I didn’t stay with them too long.”

Soon after seeing the movie “Ice Princess,” McNabb became curious about figure skating. The interest soon led her to compete in various competitions and performances on ice.

In high school she took up another interest.

“In my senior year of high school my husband, who back then was my boyfriend, went off to basic training for the Army,” McNabb says. “The military had been something I had thought about but never really considered. After graduating, I went to Boise State University. That is when the military started to become more of a viable option.”

McNabb was trying to get into the Boise State Reserve Officer Training Corps program but after many unsuccessful attempts to figure out the process of applying, she ultimately went to the local U.S. Army recruiter.

“When I was talking to the recruiter, I found that they had paralegals in the Army,” says McNabb. “I had decided I wanted to one day become a lawyer, a prosecutor to be specific, and I thought being a paralegal might be a good first step on that path.”

After a year at Boise State, McNabb shipped off to basic training in May 2017 and would ultimately wind up stationed at Ft. Drum, New York, where her now husband was stationed on active duty.

“I’m one of the few people I think that love it at Ft. Drum,” McNabb says. “It’s a small base so I’ve had a lot of great opportunities to do advance my career like Air Assault School and other courses. I also worked with a really great team so my experiences there have been pretty good so far.”

With the aspiration to one day become a lawyer, McNabb knew she couldn’t let too much time pass before she got serious about her education.

“I applied for the Army’s Green to Gold Active Duty Option,” says McNabb.

The program allows active duty soldiers to complete their baccalaureate degree or two-year graduate degree as well as earn a commission as an Army officer, owing three years of obligated service time after graduation. After a yearlong application period, McNabb was selected.

“It was a pretty competitive application process,” says McNabb. “I think nationwide they only select about 200 of us.”

With Ft. Drum being right up Interstate 81, Syracuse University landed in McNabb’s crosshairs as she needed to go to school nearby.  It wasn’t until she had been accepted however that she started doing significant research on the University.

When she isn’t studying for her degree in political science at the Maxwell School of Citizenship and Public Affairs, McNabb spends her time with her four dogs and enjoys being outside.

“I like the winters here; we go show shoeing, cross country skiing, snowboarding or ice fishing in the Black River,” says McNabb.

McNabb is hoping to secure a spot in military intelligence where she’ll serve for a year before applying for the U.S. Army’s funded legal education program that would pay for her to go to law school for three years and then return to service as a judge advocate.

“When I was young I wanted to be a cop, but as I grew up I realized I wanted to get involved on the legal side of things as a prosecutor,” McNabb says. “I’ve had the chance to be a paralegal with a prosecutor for a year and we tried 12 cases. Cases like sexual assault, domestic violence and even some child sexual assault. It made me feel good knowing that we were helping those victims and bringing them justice.”

As a Green to Gold student, McNabb is serving active duty and a cadet in the Army ROTC program at Syracuse University. In ROTC, McNabb learns the skills and lessons of leadership necessary for her future as an Army officer.

“When I came into ROTC, I was expecting the stereotypical environment,” McNabb says. “I thought there would just be a bunch of cadets that didn’t really know what they were doing. I was pleasantly surprised to get here and see the cadets here are very involved in the program, and the cadre takes a big emphasis on training. Overall it’s just a really great community here.”