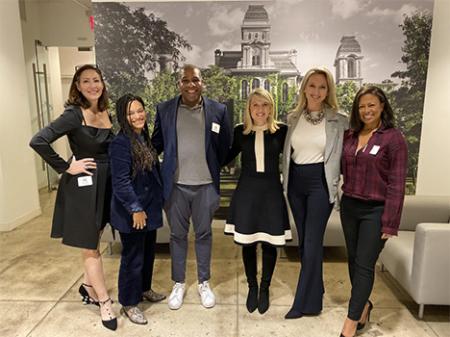 Around 60 students and alumni gathered at the Fisher Center in midtown Manhattan last month for a panel discussion hosted by Newhouse NYC, the Newhouse School’s satellite campus program.

The State of Diversity in the Media

Ceppi said every employee should embrace diversity, regardless of his or her position.

“The reality is that there are leaders who are pulling from the top,” Ceppi said. “But there needs to be a push from the bottom.”

Asked about how diversity in the workplace has changed over time, Bass, who spent 18 years at Essence magazine prior to his current role, spoke about the realities he has witnessed—like when Essence editors were laid off and found they had nowhere similar to go—and also about the reasons he remains optimistic.

“Largely, avenues of content are changing,” Bass said. “We’re seeing a rise in streaming platforms, like Netflix, and this opens up opportunities for those who want to create diverse content to do so.”

O’Connor agreed, pointing to “new waves of talent and representation” introduced through such platforms.

“While there hasn’t really been a lot of change in the management side of things, the fact that we’re having conversations means that diversity is here to stay and it’s not going anywhere,” O’Connor said. “The fact that we have so many platforms in which we can do that means that it is important and valuable to the entire country. It is up to our generation to drive this movement upstream.”

How Young People Can Champion Diversity

The conversation also addressed the concerns of young people just entering the workplace. Sewell explained how even interns and young professionals can make an impact.

“How you show up every day matters. How are you interacting with your colleagues? How are you supporting that person who doesn’t get called on as often or is afraid to speak up? Be a good ally. This is more important than being self-deprecating; you can always do very simple things that will make a difference, no matter what perspective [you have] and position you are in.”

Sewell, who is a Newhouse NYC alumna, was named executive editor of Conde Nast’s LGBTQ+ brand in January 2019, only four years into her career. In September, she won an Emmy for “Outstanding Short Documentary” for them’s “Trans in America: Texas Strong.” Several students were inspired that someone who was in their shoes so recently is now making such a big impact in the industry.

“As a senior magazine major, I truly look up to Whembley and her career path,” said Newhouse NYC student Allison Ingrum.

To assess a company’s diversity, Boreland emphasized the importance of research before the interview process, and asking questions.

“While you may not be able to grasp company culture at an interview, it is something you’re going to get from having more discussion with the company as a whole, or with someone you reach out to,” Boreland said. She also urged students to connect with Syracuse University alumni on LinkedIn to get honest feedback about company culture before taking a job.

“The way the world is turning requires us to be more informed,” Sewell added. No matter the context of diversity—whether it’s a social media campaign, news report or interactions with colleagues—being informed about one another is more central today to subdue biases, she explained.

Molen shared her personal story of overcoming stereotypes associated with her identity. As a woman in media, she empathizes with those who have been judged for their appearance.

“We need to be more accepting of different types of people,” she said. “Research finds that when you have a more diverse group of people working on a project, you are going to be more successful.”

“Some biases are ingrained, but there are also unconscious biases,” said Bass. When he joined HarperCollins last year, people sometimes assumed he worked in marketing or circulation because it was uncommon to find a black man in the editorial room, he said. “Some things are just a miscommunication and you just need to have a conversation. Don’t make assumptions: let someone tell you first.”

O’Connor advised students to take advantage of new experiences, even if they are uncomfortable, “because that is how you gain perspective and empathy.”

“When you have those experiences, it really sheds a whole new light and perspective on all things that you do as an executive in the media, and as a storyteller,” she said.

The Future of Diversity

“I left the panel feeling very hopeful about the future of how the media industry deals with diversity,” said Sarah Shane, a senior television, radio and film major. “It was especially reassuring to hear that as younger professionals, we have the power to foster how companies deal with inclusion and representation.”

Courtney Terr, a junior advertising and marketing management major, was able to connect the discussion to her current internship at RPM, an entertainment advertising agency.

“From the panelists, I learned the importance of having diversity of thoughts and perspectives in the workplace,” Terr said. “This is not only to understand those you’re trying to reach, but also inviting ideas that have yet to be introduced.”

Smitha Rao ’05, senior social media relations manager at Definition6, said she “welcomes the challenges” of being a minority in broadcasting. Through over 15 years of experience, Rao learned to fight for the position she wanted and deserved.

“The biggest lesson was to not get complacent in a role that you know doesn’t do you justice,” Rao said. “Being a minority woman means that some people will overlook or underestimate you; but that only means you have a clear advantage when it comes to what you can achieve. You are more of a force when you’re underestimated, and that is a powerful thing.”

Story by Jane Lee, senior public relations major in the Newhouse NYC program and an intern at DeVries Global.