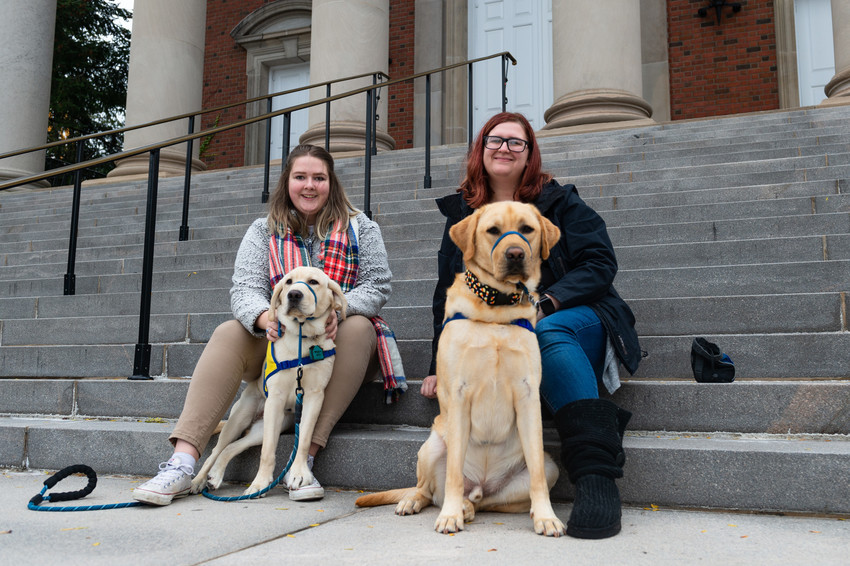 Skye Toomey with Waltham, left, and Gianna Cacciatore with Princeton are with the student organization Service Dogs at Syracuse. The student group partners with the national nonprofit organization Canine Companions for Independence that pairs puppies with volunteer puppy raisers. (Photo by Evan Jenkins)

You may have noticed “Princeton” and “Waltham” around campus this fall: attending classes, hanging out on the Shaw Quad, living on South Campus and making new friends.

These two friendly faces aren’t here for the academics but a different type of learning.

Princeton and Waltham are among a group of five Labrador retrievers on campus with their student handlers as part of the student group Service Dogs at Syracuse. The student group partners with the national nonprofit organization Canine Companions for Independence that pairs puppies with volunteer puppy raisers, who take care of the puppies until they are old enough to go through professional training.

For the Syracuse students, it takes time and effort to raise and care for the dogs but it’s gratifying knowing the service the dogs will eventually provide and the smiles they bring to students and the campus community during their time here. 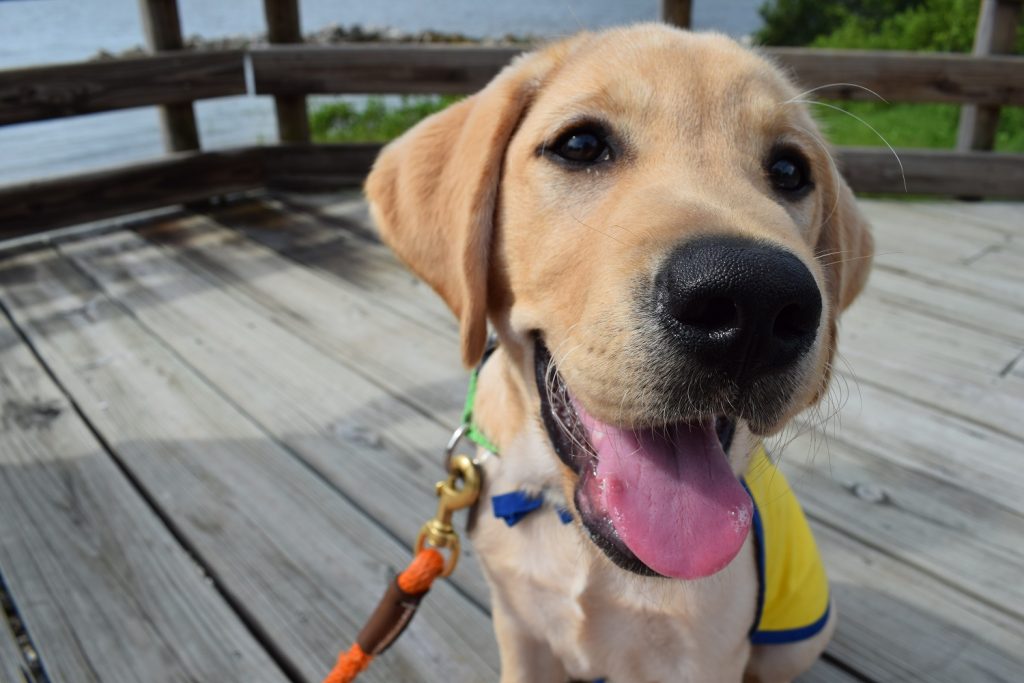 “It’s been such a rewarding experience to be able to raise Princeton and to have him impact so many people’s lives even before he’s gone on to help someone,” says Gianna Cacciatore ’20, president of Service Dogs at Syracuse.

The students receive the pups when they are eight weeks old, and then socialize and train them with basic commands until about they are about 18 months old. The dogs then begin more intensive training with professionals to be able to assist individuals with disabilities or to assist professionals working in a health care, visitation, criminal justice or educational setting.

Cacciatore, a computer science major in the College of Engineering and Computer Science, started the student organization in 2016, combining two of her passions: dogs and helping others. Before her time at Syracuse, she had visited a friend who was raising a service dog at the University of Illinois at Urbana-Champaign. “I remember hanging out with her and thought ‘this was so cool,’” Cacciatore says.

When she came to Syracuse, she was trying to find an organization to become involved in and thought back to her friend. Cacciatore posted to the Facebook page for Syracuse University students in the Class of 2020 to gauge if there would be interest in such a club that would raise service dogs. The results were positive, and she applied to become an official student organization, which was granted in 2017. 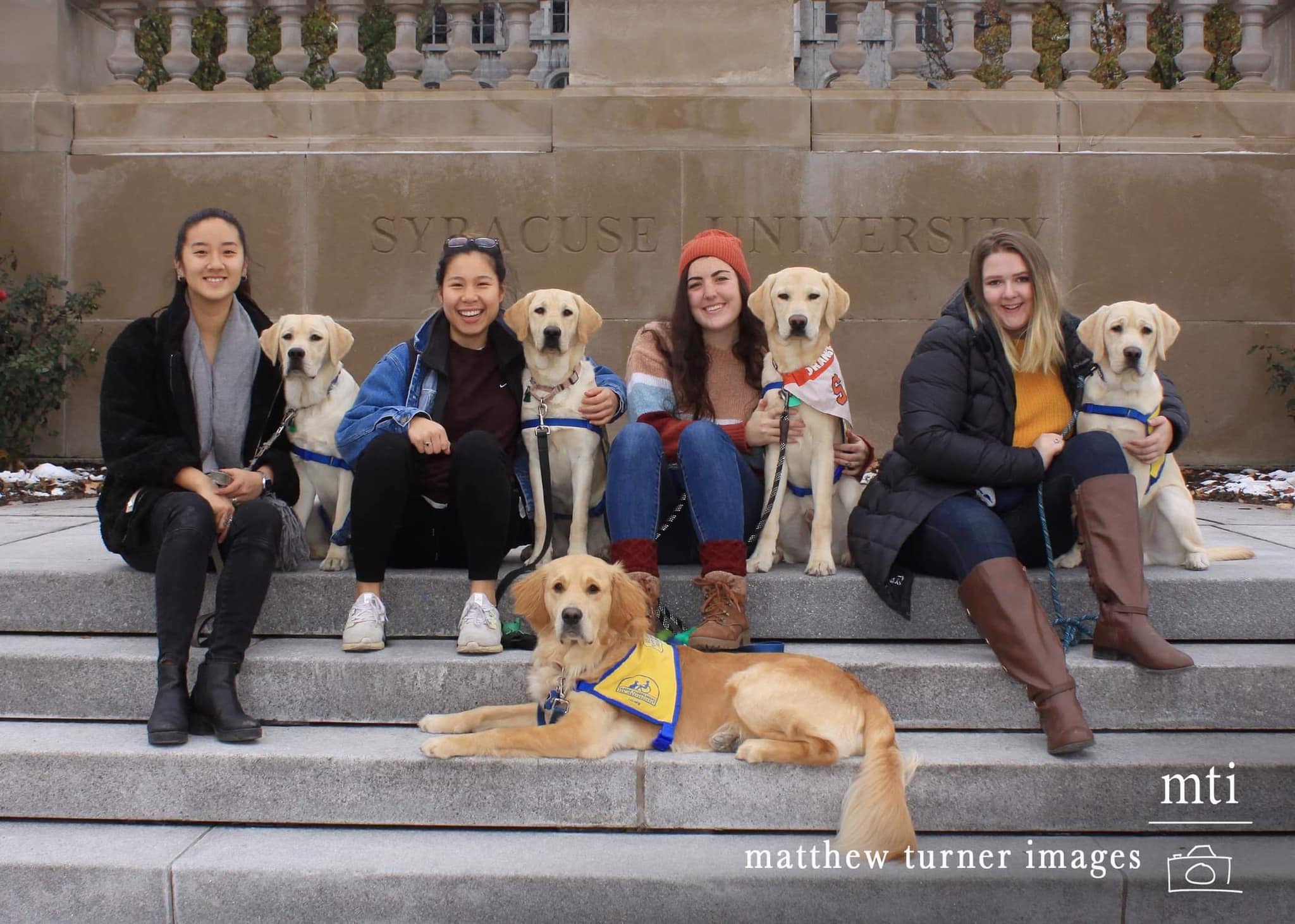 Members of Service Dogs at Syracuse take a break with their service dogs in training, which they raise for Canine Companions for Independence (CCI). From left are Kara Sun with Winston, Fiona Lew with Amour, Karli Bennett with Alpine, and Skye Toomey with Waltham. In the front is Irvine who is a CCI puppy in training that is being raised by a City of Syracuse couple. (Photo by Matthew Turner)

Another student on Facebook told her about Canine Companions for Independence (CCI), and Cacciatore began working with the organization. The group’s first dog was Taya, who lived off campus with Olivia Mance ’19.

Cacciatore got Princeton the summer before her junior year in 2018, and the dog had been with her at home and at Syracuse up until last month. In November, Princeton went on to his next level of training at a CCI training facility in Medford, New York. Cacciatore knew it would be sad when he left, but she knows his mission is so important. “He’s going to help someone who really needs his assistance,” she says.

Cacciatore says a university is a perfect place to raise a prospective service dog. There are many opportunities for socialization and different noises and environments, so the dogs are prepared as possible when they begin their professional training.

Toomey, a dual major in neuroscience and biology in the College of Arts and Sciences, brings Waltham along whenever she goes to campus. At the start of the semester, she spoke with her professors about bringing the dog to class.

“All my professors were fine with it. Waltham sleeps in class; he just snores a little bit,” Toomey says. 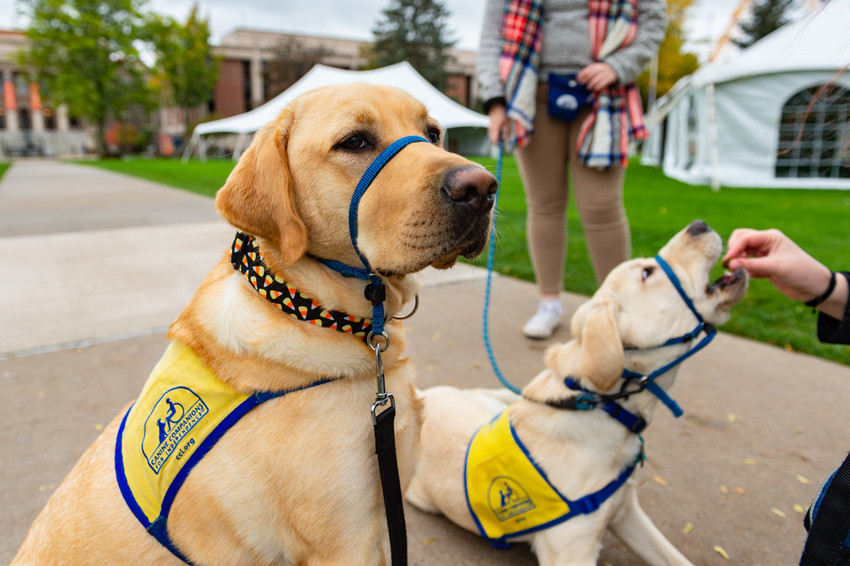 Princeton and Waltham, service dogs in training, get in some training on the Shaw Quad. (Photo by Evan Jenkins)

While Princeton was on campus, he would go to Cacciatore’s work in a Link Hall office and attend class with her. Cacciatore also checked with her professors, making sure other students were comfortable with having a dog in class.

On days when Cacciatore would be on campus all day, she would meet up on campus with sitters who would take care of Princeton. “I didn’t want him getting bored in back-to-back classes. He was still a puppy, and it’s good to have them interacting with him and training with different people,” Cacciatore says.

On campus, people are eager to greet the dogs. “We’ll be walking on the Quad, and people will just flock toward us,” Toomey says. “If we’re trying to work on a specific skill or trying to get to class, we can’t always stop to say ‘hi.’”

But when Waltham is without his working vest, it’s a great time for meeting new people. “When you see people on campus, they brighten up, and people have said seeing him has made their day. That feels amazing,” Toomey says.

For the first time this year, students with the puppies were allowed to live in on-campus student housing on South Campus. Amour, Alpine and Waltham are on South Campus with their raisers.

Cacciatore had met with Eileen H. Simmons, director of Housing, Meal Plan and I.D. Card Services, to make her case for the student raisers and their dogs to live on South Campus. Simmons initially denied the request, due to policies about pets in student housing, but the student organization’s persistence paid off.

“Gianna would visit with Princeton and seeing the whole purpose of the overall program how do you not say ‘yes’? For what that dog is going to do one day and what our culture is all about on our campus, it just all fit together,” Simmons says.

As the pilot year, “it’s going very well,” Simmons says. The students with the service dogs-in-training could pick their rooms and roommates in a specific block of Winding Ridge. 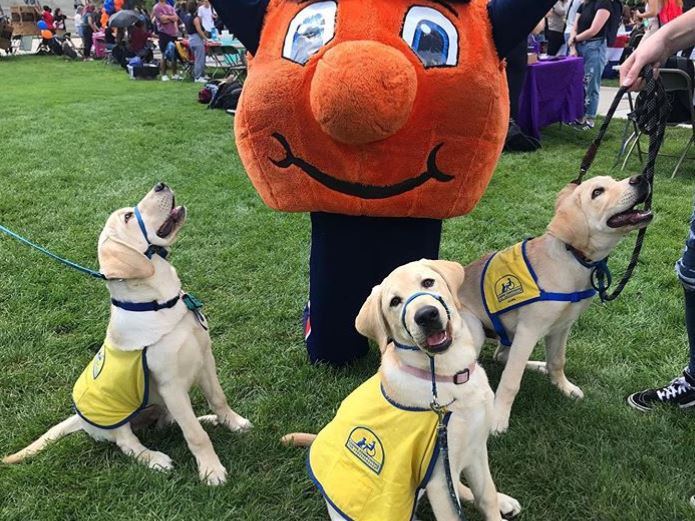 With the ability to have raisers on South Campus, it opened up the possibility for more students to be involved with Service Dogs at Syracuse.

“Being a raiser is one way. Students can also be sitters—we have about 18 of them this year, split between the different dogs,” Cacciatore says. “We have different committees for fund raising and public relations, and a general body, so students can participate in events.”

Once the student’s time with the dogs as raisers are complete, the dogs are returned to CCI for further training and then matched with a potential individual for placement. If there isn’t a good match to be found or if the dogs are released from the training for any number of reasons, such as being fearful of certain situations or objects, the raisers are asked first if they want to adopt the dogs as regular pets.

“Everyone asks me ‘do you want to keep him?’ Yes, if he failed, I would. But I would much rather he was out there helping someone. He’s got a job to do,” Toomey says.

She has seen firsthand the impact that therapy animals can have. “My brother Kyle, who is autistic, got a therapy cat and that changed his world. I wanted to give that opportunity for someone to have a life without being held back by anything,” Toomey says. “The best part of this experience is knowing Waltham’s going to go and do something amazing one day.”

Cacciatore has also gotten a lot out of the experience and is proud of the work they’re doing. “It’s been absolutely wild watching this club grow over the past four years and having a hand in it,” she says. 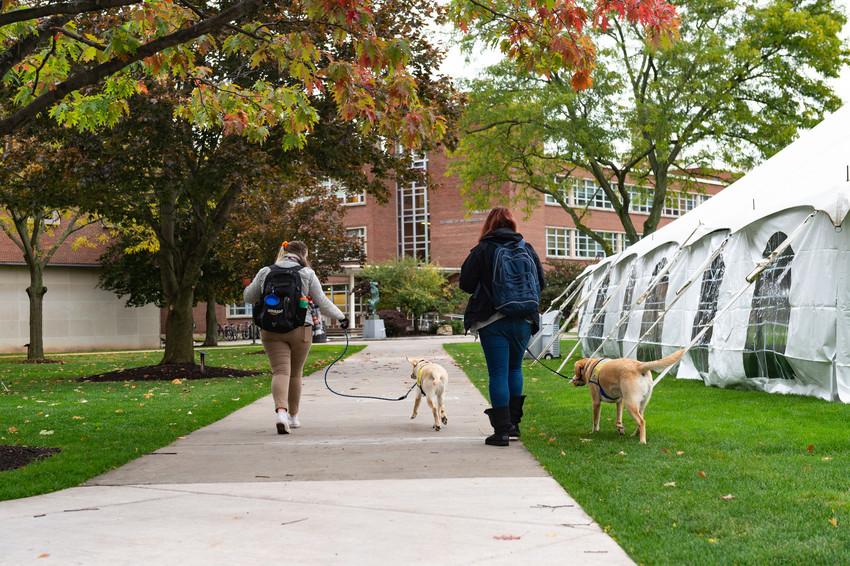