Meghan Florkowski has been named director of the WISE (Women Igniting the Spirit of Entrepreneurship) Women’s Business Center. Her appointment was effective Nov. 11. 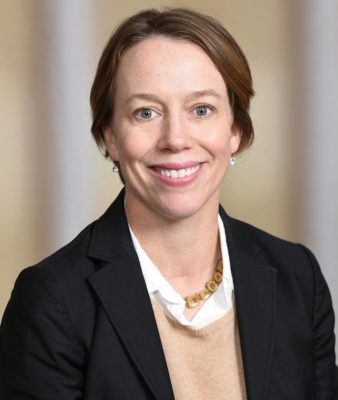 “Meghan brings a positive attitude, strong work ethic, an ability to lead collaboration among diverse stakeholder groups and outstanding leadership to the position,” says Alex McKelvie, associate dean for undergraduate and master’s education at the Whitman School. “We’re delighted to welcome her to the Whitman family as leader of the WISE WBC.”

Among her professional experiences, Florkowski led a portfolio of entrepreneurship training programs at the Institute for Veterans and Military Families at Syracuse University that reached more than 30,000 military-service-connected individuals. One notable program in this portfolio (V-WISE) was for women veterans, which Florkowski grew into a nationally recognized program that reached more than 2,000 women veterans across 49 states. In this position, she oversaw a budget exceeding $5 million, was successful in collaborating with the U.S. Small Business Administration, raised significant outside funding, led a team of six people, and created and managed an advisory board.

During her time with V-WISE, the program was highlighted by more than 75 media outlets, including Entrepreneur Magazine, MSNBC, The Washington Post and Military Times. The V-WISE program was recognized in 2015 by Harvard’s Kennedy School as a bright idea.

Florkowski also worked in employer relations at Le Moyne College, as an operations manager for the USO, as a military transition career-training leader in Europe and as a captain in the U.S. Army, among other positions.

She received a bachelor’s degree in engineering psychology from the U.S. Military Academy at West Point and a master’s degree in exercise science and health promotion from California University of Pennsylvania.

About WISE
In 2003, the Whitman School launched WISE (Women Igniting the Spirit of Entrepreneurship), an entrepreneurial initiative established to train and inspire women interested in launching or growing a new business. The objectives of all training and events are to provide information, resources and support for women entrepreneurs, enabling each to successfully advance their businesses to the next stage of profitability and success. Much of the programmatic focus is on serving those who are socially and economically disadvantaged, underrepresented minority groups, and veteran and service-disabled veterans in the community. The goal is to create a thriving community of women entrepreneurs and leverage the student, faculty and alumni resources at the Whitman School. WISE is a proud partner with the U.S. Small Business Administration.