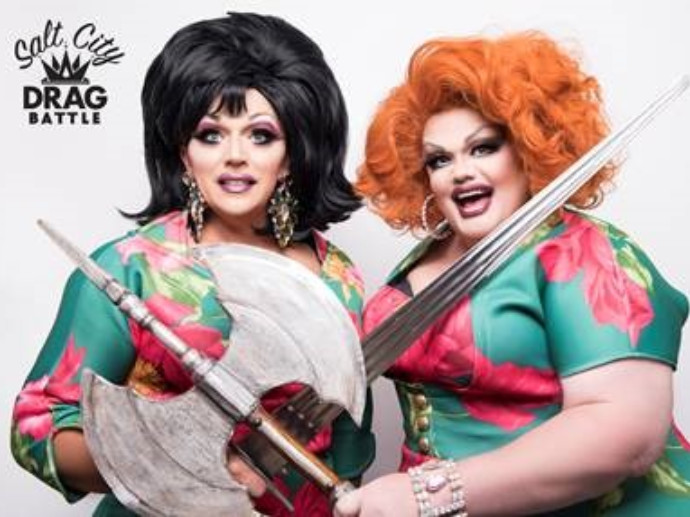 They’re back! Mrs. Kasha Davis and Miss Darienne Lake return to Syracuse Stage to host an evening of drag, drinks and dancing at the third annual Salt City Drag Battle. Co-presented with Rain Lounge, this year’s battle is Saturday, Jan. 11, at 8 p.m. in the Archbold Theatre at the Syracuse Stage/SU Drama Complex, 820 E. Genesee St. Who will be named the Salt City Queen or King of 2020 and win a $1,000 cash prize?

Participants will be selected through a video submission process on the Syracuse Stage website, which is open now. Interested participants should provide video of past performances. Deadline for submissions is Dec. 9.

Hosted by “RuPaul’s Drag Race” alumni Mrs. Kasha Davis and Miss Darienne Lake, proceeds from the Salt City Drag Battle will benefit Syracuse Stage artistic programming. The pageant will feature nine contestants, who will showcase one runway look and one talent performance. Finalists will then compete in a lip-sync battle for a winner-take-all grand prize. All contestants will receive a $150 stipend for participation and performance in the Drag Battle. Judging the Battle will be Ralph Zito, Syracuse University Department of Drama chair; Brian Moreland, Broadway producer and producer of “Thoughts of a Colored Man,” which had its world premiere at Syracuse Stage this past fall; and a celebrity guest judge.

“Our contestants and audience members had such great times at previous Drag Battles that we couldn’t wait to bring some spectacular Central New York talent back to our stage,” says Jill Anderson, managing director, Syracuse Stage. “This, by far, is our most exuberant fundraiser, and we hope the community will share and be part of this exciting event.”