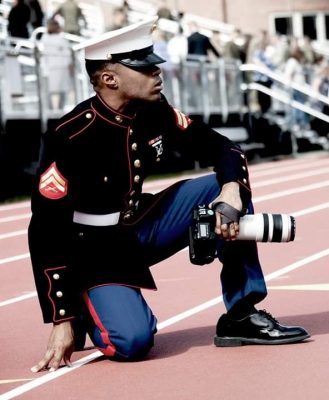 It’s said a picture is worth a thousand words. For military service members who go forward into combat with a rifle and a camera, it’s more than just an adage. Syracuse University student veteran Adrian Weekly ’20 knows this all too well.

“I had enlisted in the Marine Corps to be an aviation mechanic,” says Weekly, a communications and rhetorical studies major in the College of Visual and Performing Arts. “Then some people found out I could draw pretty well, and I was made into a combat photographer instead.”

Weekly grew up in Atlanta. His childhood was full of traveling and martial arts, and he was involved with the Navy Junior Reserve Officer Training Corps in high school. It was there that a retired U.S. Marine Corps gunnery sergeant told him he had the attitude to become a Marine. When he enlisted at the age of 17, he was following in the footsteps of his parents, both of whom are U.S. Navy veterans.

“My father is Caribbean, so every summer I went to St. Thomas, part of the U.S. Virgin Islands,” Weekly says. “That sparked the desire to travel and see the world.  Both of my parents were in the Navy, so they probably understood why I wanted to enlist.”

Ten days after graduating from high school, he found himself at Marine Corps Recruit Depot Parris Island, South Carolina, to attend boot camp. It was there that he was exposed to the Marine Corps Martial Arts Program (MCMAP.)

“While I was in the service, I was able to continue martial arts like I had when I was younger. I even became a Marine Corps martial arts instructor, and that was probably the most difficult thing I’ve ever done.”  Weekly says. MCMAP, like other martial arts, has a progression system that allows Marines to wear different color belts to show their progress in the system, with instructors visually identified by a tab that they wear on their belt.

Weekly still had the desire to travel and see the world, and while being a combat photographer in the U.S. Marine Corps can offer very unique experiences, he decided to volunteer for the Marine Security Guard program to really immerse himself in other cultures throughout the world.

“I went on to become an M.S.G. guard and was assigned to the embassies in Botswana, Germany and Iraq,” Weekly says. His assignment to the Marine Security Guard is a highly coveted position within the Marine Corps—the only branch of service entrusted to guard the U.S. embassies and consulates throughout the world.  The selection process is intense, and the training at Quantico, Virginia, is even tougher.

“It was definitely a rewarding experience. I’ve been able to travel to at least 27 countries and do things that most people would never dream of,” he says. “But ultimately, I knew there were other things I wanted to accomplish in life. I never joined thinking that I’d make it a career.”

Weekly came to Syracuse University to build on his past experience in the communications field and ultimately landed in the College of Visual and Performing Arts. He wants to capitalize on his military experience and education to pursue a career in public relations and marketing.

“I like it here. I feel as though I’m treated like any other student,” Weekly says. “I’m aware that being the only veteran in many of my classes is not something many students can relate to, but that’s okay. Being in the military definitely helped me with my academic pursuits. Without my experience in the Marine Corps, I don’t believe I would be the student that I am today. I’m better at time management, networking, and I have a drive to succeed even when I might be feeling overwhelmed.”

That perseverance is a trait many of his fellow student veterans share. As a student veteran, Weekly was recently given the opportunity to attend an immersion trip in New York City, where he spoke with a wide variety of potential employers.

“It was a great trip and a great experience,” Weekly says. “I really enjoyed being able to get out there and shake hands with people from a wide variety of industries. It really opened up a lot of ideas for how I can apply my background with my degree, and I look forward to that next step.” 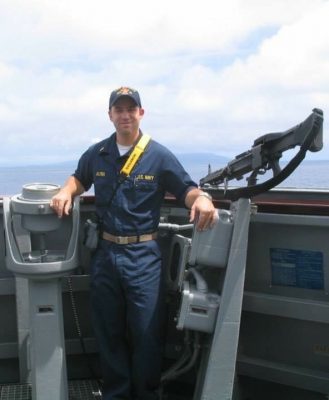 Joe Alfieri, Central New York native and director of campus planning, design, and construction at Syracuse University, chose to attend the U.S. Naval Academy after high school, not exactly knowing what to expect.

“As a kid I was always interested in the Navy,” Alfieri says. “I had this incredible opportunity to attend the Academy in Annapolis. Looking back, I didn’t really know what I was getting into, but I am so glad I went. It was a good call.”

Alfieri graduated in 2003 as a designated service warfare officer. He did his first tour aboard the USS Milius, working as the main propulsion officer on the destroyer. A year later, he deployed to the Horn of Africa for six months on a counter-piracy assignment.

When he returned, Alfieri transferred to a new unit on the newest aircraft carrier at the time, the USS Ronald Reagan, and deployed for another six months to the Persian Gulf, where he and his unit directed maritime security operations.

“They were such interesting deployments on very different ships,” Alfieri says. “An aircraft carrier is like a small city. To see how the Navy works at the highest level is eye opening. At that time, Iraq was very active. While we were doing maritime security, the air wing was providing support to the Marines in Iraq, so it was like being on two missions.”

Alfieri returned to San Diego after his second deployment and transferred into facilities at Naval Base Coronado. He spent five years total in uniform before transitioning out in 2008.

“It proved to be a challenging time to transition out with the economic crisis,” he says. “I started networking and talked to Tiffany Monaco, who was also from Syracuse and had actually served in the Navy, too. My wife had attended Syracuse for law school, and I was able to land a job as a project manager for University Facilities, so we moved back and started a family.”

Alfieri has been with Facilities Services ever since. He spent eight years in project management before being promoted to his current role as director of campus planning, design, and construction in 2016. This year, he has been busy with the new Barnes Center at The Arch and the soon-to-be-completed National Veterans Resource Center at the Daniel and Gayle D’Aniello Building (NVRC),

As a veteran, he believes the University’s commitment to the military resonates.

“I think it’s great that the Chancellor has made veterans central to his legacy. I have been a part of the NVRC project since the design competition, and I am honored to help make that idea a reality,” Alfierie says. “I have been able to connect some veteran-owned construction businesses to the University for this project. As a veteran myself, seeing other veterans work on this center for all veterans—it’s a very cool thing to do every day.”