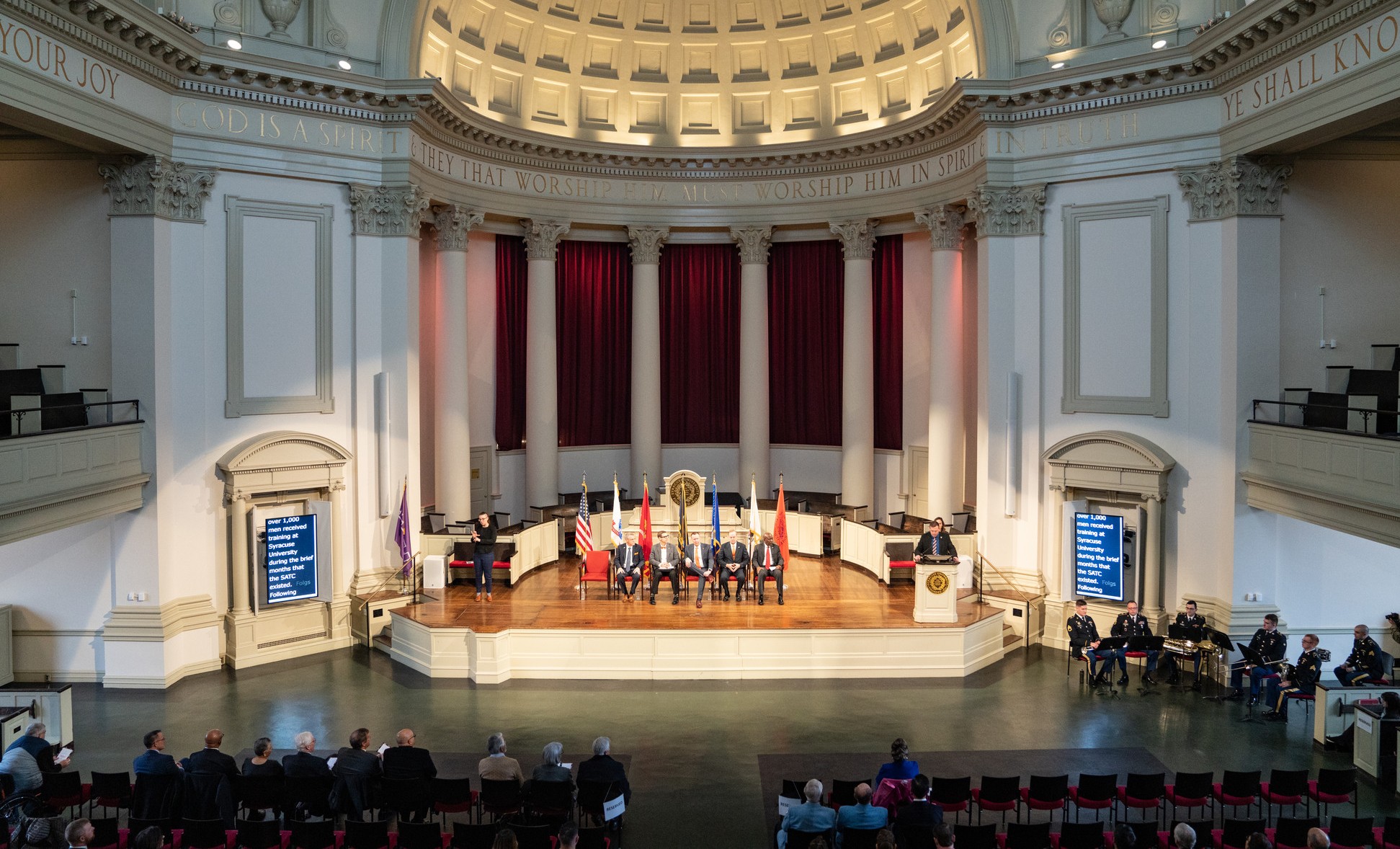 On Monday, Nov. 11, the Syracuse University community and members of the Greater Syracuse area gathered to honor the service of U.S. military veterans of all wars during the University’s annual Veterans Day ceremony in Hendricks Chapel.

“This University does not give veterans a handout. Veterans do not want a handout. They want a hand up. Here you give them a hand up to be the best,” Kent said. “We have troops deployed around the world, 365 days a year, and that is why Veterans Day should be celebrated every day. This university makes sure veterans are celebrated 365 days a year.” 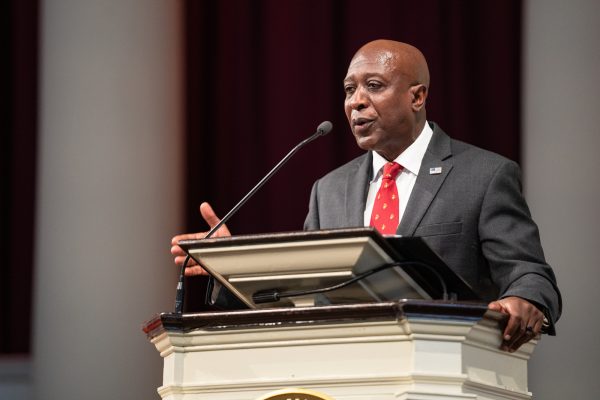 The University continued its tradition during the ceremony of a veteran or military-connected student presenting Chancellor Kent Syverud with an American flag, which is subsequently raised and flown over Hendricks Chapel. William Harrington ’21, a psychology major in the College of Arts and Sciences and presently serving staff sergeant in the New York State Army National Guard, presented this year’s flag to the Chancellor with Alyssa Rote ’22, a U.S. Air Force ROTC cadet and aerospace engineering major in the College of Engineering and Computer Science. The flag was procured by U.S. Army Master Sgt. Sean Graham ’00, while serving in the Horn of Africa with the 403rd Civil Affairs Battalion in Mattydale, New York.

Following the outdoor flag-raising ceremony, Army ROTC cadet Michael Griffin ’22, an Army veteran and military photojournalism student in the Newhouse School, and U.S. Army Staff Sgt. Felicia Jagdett presented a wreath of flowers to U.S. Navy veteran Moise Laub ’20 and Phillip Benedict, U.S. Air Force veteran and Syracuse University employee. The exchange of the wreath between service members and veterans honors past Syracuse University veterans and signifies the transition and distinction between those who are currently serving and those who aspire to be called a veteran. 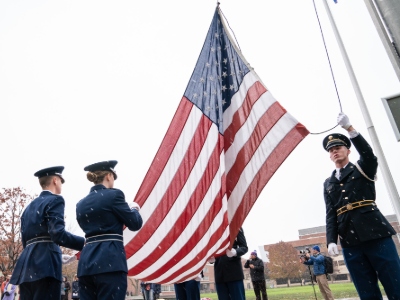 Cadets raise the American flag outside of Hendricks Chapel.

“Our student veteran and military-connected enrollment is at a record high, and a growing number of our faculty and staff have also served in the armed forces,” says Vice Chancellor for Strategic Initiatives and Innovation and Institute for Veteran and Military Families Founder and Executive Director J. Michael Haynie. “Our campus community takes great pride in such diversity, and we continue to be committed to those who have served the nation in uniform. We are honored to pay tribute to veterans who have chosen Syracuse University as part of their journey and to all veterans around the world.”

Events including the Veterans Day ceremony align with the University’s commitment to be the “best place for veterans,” a legacy that dates back to World War II when Chancellor William P. Tolley opened the University’s doors to military personnel returning from war. Today, the University provides an ever-growing number of veteran and military-connected programs and resources, including the Office of Veteran and Military Affairs, the Office of Veteran Success and the Institute for Veterans and Military Families.

The University was recently ranked the No. 1 private institution in the country for veterans for the second year in a row by Military Times in its annual Best for Vets rankings. The Orange commitment is further evident in the construction of the National Veterans Resource Center at the Daniel and Gayle D’Aniello Building (NVRC). Set to open next semester, the NVRC is the first-of-its-kind, multi-use facility dedicated to advancing academic research, programming and community-connected innovation serving the social, economic and wellness concerns of the nation’s veterans and families.

Veterans Day dates back to 1918, when, on Nov. 11, the Allied Nations and Germany agreed to an armistice after four years of fighting. Nov. 11 would thereafter be known as “Armistice Day,” which became a legal U.S. holiday in 1938. In 1945, Armistice Day was expanded to honor and remember all veterans that have served. By 1954, U.S. Rep. Ed Reese of Kansas presented a bill to make the national celebration of veterans into a holiday and therefore replaced the word “Armistice” with “Veterans.”