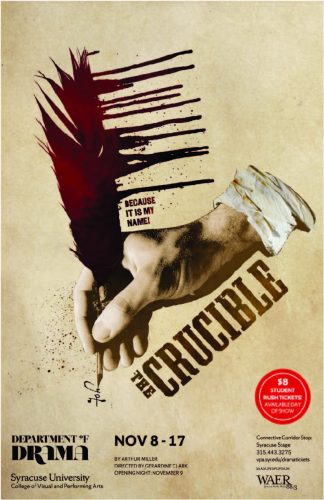 The Syracuse University Department of Drama continues its season with Arthur Miller’s “The Crucible” directed by faculty member Geri Clark. “The Crucible” previews Nov. 8 and runs through Nov. 17 in the Storch Theatre at the Syracuse Stage/SU Drama Complex, 820 E. Genesee St.

Recognized today as a mid-20th-century American classic, “The Crucible” is set in Salem, Massachusetts Bay Colony, in 1692 amid a whirl of paranoia and hysteria fed by the winds of unfounded accusations of witchcraft. Miller fictionalized the historic record of the Salem witch trials to explore how fear warps judgment and extremism eradicates truth. In doing so, he created a theatrical world where innocence and guilt are indistinguishable and only fanatics speak with impunity.

Miller wrote “The Crucible” in 1953, prompted by the investigations of U.S. Sen. Joseph McCarthy and the House Committee on Un-American Activities in the late 1940s and early 1950s. The so-called Red hunt, ostensibly initiated to root out communists in the U.S. government, cast a wide net and eventually ensnared many private citizens, including many academics and artists. Careers and lives were recklessly ruined.

Miller found parallels to the country’s experience of the McCarthy hearings in the record of the Salem witch trials, especially in the way its “terribly serious insanity” obliterated “all nuance, all the shadings that a realistic judgment of reality requires.” This holds true today for director Clark, who finds the play especially relevant in a time where false information can spread like wildfire and information must be tempered with care and caution. Clark’s vision for the production is “a response to the dishonesty and lack of honor that has come to light within our political system.”

The dramatic core of “The Crucible” coalesced in Miller’s mind when he read notes on the testimony of Abigail Williams in the historic record of a trial. He understood immediately that Abigail and John Proctor, husband to Elizabeth, had had an affair. This triangle became the human heart of his play and the catalyst for the unfolding drama. As Abigail’s accusations overwhelm the town, John and Elizabeth and others are swept up in a kind of communal madness from which there seems no escape. They are sane people in a world gone mad. Surely, therein lies relevance to the world beyond the stage

Director Clark adds, “It’s wonderful to have the opportunity to produce one of our greatest playwright’s most important plays in a time when the message will resonate in such a different way.”

In selecting “The Crucible” for the season, Department Chair Ralph Zito points out that there is “no correlation between the age of a play and its timeliness.” The play’s issues of “moral choice, integrity and justice” have stayed relevant throughout history and remain so today, he says.