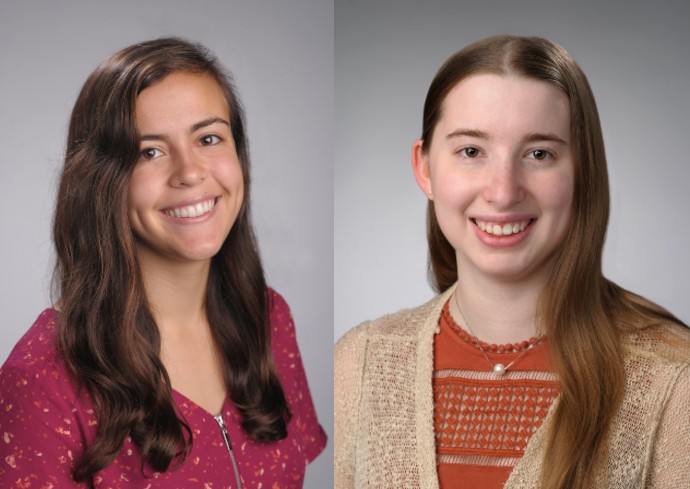 Syracuse University senior Bethany Murphy and alumna Emma Ettinger ’17 have been named finalists for the Marshall Scholarship, one of the United States’ most prestigious nationally competitive scholarship awards. Both will interview for the scholarship in early November.

Murphy, an environmental engineering major in the College of Engineering and Computer Science, is a member of the University’s Reserve Officer Training Corps. She is also the recipient of an Astronaut Scholarship, a National Oceanic and Atmospheric Administration (NOAA) Ernest F. Hollings Undergraduate Scholarship, a Udall Scholarship and a 2019-20 Remembrance Scholarship. This past summer, she interned with NOAA at its Colorado Basin River Forecast Center, studying the best way to quantify snow water equivalent in snow pack. She is analyzing data from a relatively new NASA Jet Propulsion Laboratory mission—the Airborne Snow Observatory—which utilizes imaging spectrometry and LIDAR to take snow measurements over the entire extent of a watershed. She has also served as a Reservoir Operations Intern with the Massachusetts Water Resources Authority. Murphy works in Professor Teng Zeng’s environmental organic chemistry lab, where she has developed a project tracing the degradation of organic pollutants in water systems.

If selected for a Marshall Scholarship, Murphy plans to pursue a master’s degree in water and environmental management at the University of Bristol to develop and deepen her understanding of water policy and management locally, nationally and internationally. In the second year of the award, she would pursue a master’s degree in water engineering at the University of Sheffield to focus on the civil and infrastructure elements of water resources engineering.

Murphy ultimately plans to commission as an engineering officer in the U.S. Army Reserves and pursue a Ph.D. in water engineering resources. She hopes to one day become the director of the Institute of Water Resources, the primary U.S Army Corps of Engineers organization that works on water policy, and to develop feasible and effective strategies the Army can use to reduce their water footprint in ways that will benefit both the Army and the environment.

“I’ve always been curious to learn about water in a variety of geographies because each place comes with its own set of water challenges and management approaches,” she says. “U.K. universities are leaders in water and sanitation research, and water policy development. Studying technical and policy-oriented water solutions in the U.K. will make me a more nimble engineer and train me to think creatively about multiple facets of water-related issues.”

Ettinger received a bachelor’s degree in stage management from the College of Visual and Performing Arts. She was a 2017 University Scholar and a member of the Renée Crown University Honors Program.

If selected for the Marshall Scholarship, Ettinger plans to enter a one-year master’s degree program in Shakespeare and Creativity at the University of Birmingham’s Shakespeare Institute in Stratford-upon-Avon. In the second year, she would begin the Ph.D. program in Shakespeare Studies at Birmingham, and complete the degree after the Marshall grant period. She is particularly interested in the adaptation and interpretation of Shakespeare’s works and fostering more inclusive productions of the plays.

“I’m looking to study in the U.K. because for multidisciplinary Shakespeare study, I really want to be someplace where Shakespeare is an essential part of the culture and the theatrical landscape,” Ettinger says. “I applied for the Marshall Scholarship in particular because of the focus on building lasting networks between the U.S. and U.K. I’m a theatre artist as well as a scholar, and I am interested in fostering long-term professional collaborations between U.S. and U.K. theatre organizations.”

After graduation from the University in 2017, Ettinger spent a year as the stage management intern at McCarter Theatre in Princeton, where she worked on bringing a variety of plays to the stage. She has most recently been working freelance, primarily as a stage manager. She spent the last two summers stage managing with NewArts, a youth theatre organization in Newtown, Connecticut, and worked off-Broadway last fall as a production assistant on the world premiere of “Bernie and Mikey’s Trip to the Moon.” Ettinger came back to Syracuse last spring to work with Red House on their production of “The All Night Strut.” She is back in Princeton this year, supervising the young actors in McCarter Theatre’s production of “A Christmas Carol” and stage managing three shows for Princeton University.

Both Murphy and Ettinger worked with the Center for Fellowship and Scholarship Advising (CFSA) as they developed their applications for the Marshall Scholarship. “Bethany and Emma are truly extraordinary students and leaders. They work in very different fields—engineering and theatre—but both have clear professional goals and a strong rationale for graduate study in the U.K., so are excellent fits for the Marshall Scholarship,” says Jolynn Parker, director of CFSA. “It’s been such a pleasure to work with them through the application process, and we’re so proud that they’ve been recognized as finalists. Being selected as a finalist is itself a tremendous honor in this competition.”

The Marshall Scholarships finance young Americans of high ability to study for a graduate degree in the United Kingdom. Up to 50 scholars are selected each year to study at the graduate level at a U.K. institution in any field of study. As future leaders with a lasting understanding of British society, Marshall Scholars strengthen the enduring relationship between the British and American peoples, and their governments and institutions. Marshall Scholars are talented, independent and wide-ranging, and their time as scholars enhances their intellectual and personal growth.