Students Produce Late-Night Comedy in ‘Live From Studio B’ 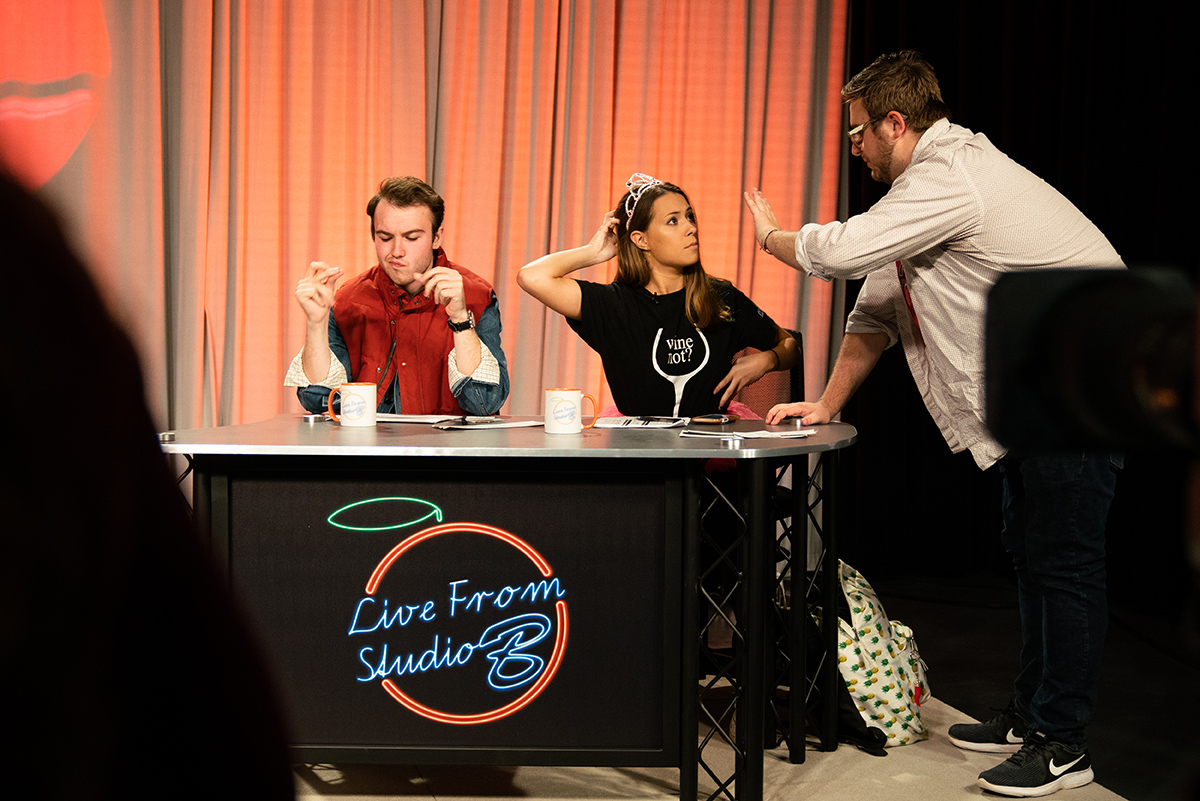 Before the show goes on air, junior television, radio and film (TRF) major and co-head writer J.P. Phillipe provides some final advice to “Live From Studio B” host Hayden Broom, a junior in the TRF program, and co-host Annika Carlson, a junior dual major in TRF and policy studies. (Photo by Kai Nguyen, a senior in the photography program at the Newhouse School.)

Every other Sunday during the semester, laughter and the smell of pizza emanate from Dick Clark Studios in Newhouse 2 as the cast and crew of “Live From Studio B” come together to present a 28-minute, late-night comedy show to a live audience.

“Live from Studio B” began in spring 2017 when television, radio and film (TRF) majors Joshua Feinblatt ’19 and Lizzie Michael ’19 decided to produce a late-night show. It was the first program of its kind at Syracuse University, says Andy Robinson, general manager of the Orange Television Network, which airs the show live on its website. Robinson says he was interested in getting a live show on the network, and Feinblatt pitched a late-night comedy show, with both live and pre-taped segments. 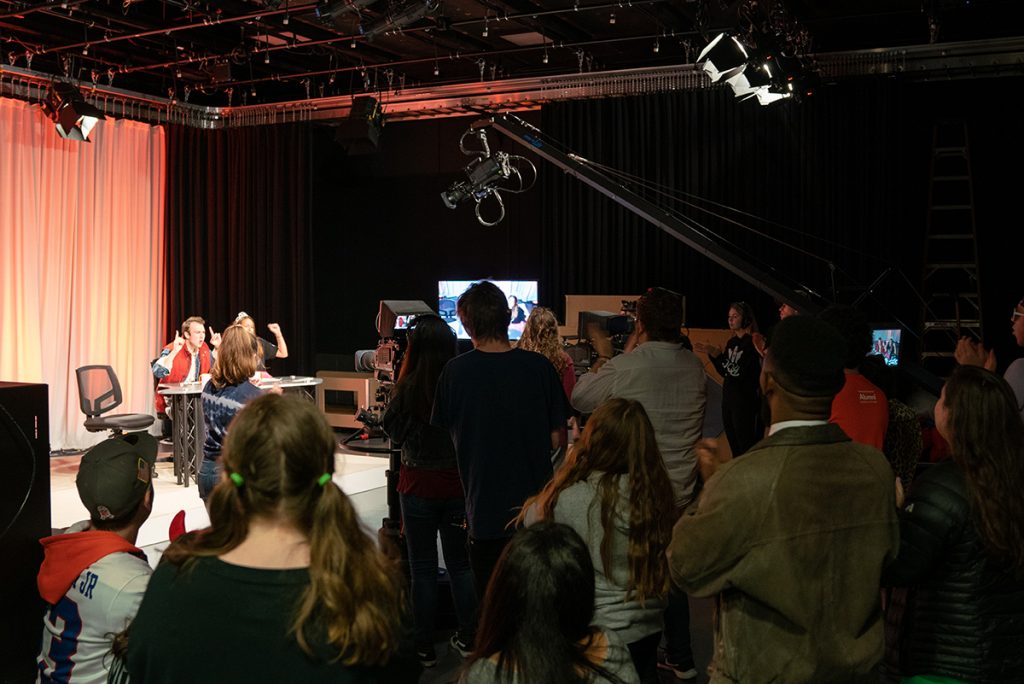 As the show is being recorded, the rest of the crew serves as the live audience, cheering and laughing at the cast on stage. (Photo by Kai Nguyen.)

“After a general interest meeting, Josh and his friends started the show and put out three episodes that first semester,” Robinson says.

“It’s crazy how we’ve gotten here, but it’s a well-oiled machine at this point,” says executive producer Mackenzie Sammeth, a junior in the TRF program.

The production process for each show begins with a meeting the Tuesday after the previous show airs. At that meeting, writers pitch ideas for the pre-taped segments. Scripts are finalized by Friday and given to the content creators to shoot. The following Tuesday, writers meet again, this time to pitch material for the live part of the show.

On the day of the show, the cast and crew of about 55 students arrive at Dick Clark Studios three hours before air time to set up and do a run-through. During the show, the crew becomes the live audience. After they wrap, the crew breaks the set down, then gathers for a brief meeting to start the process all over again.

Sammeth began working as part of the crew during the first semester of her first year at the University, when Feinblatt, then her resident advisor, encouraged her to get involved. 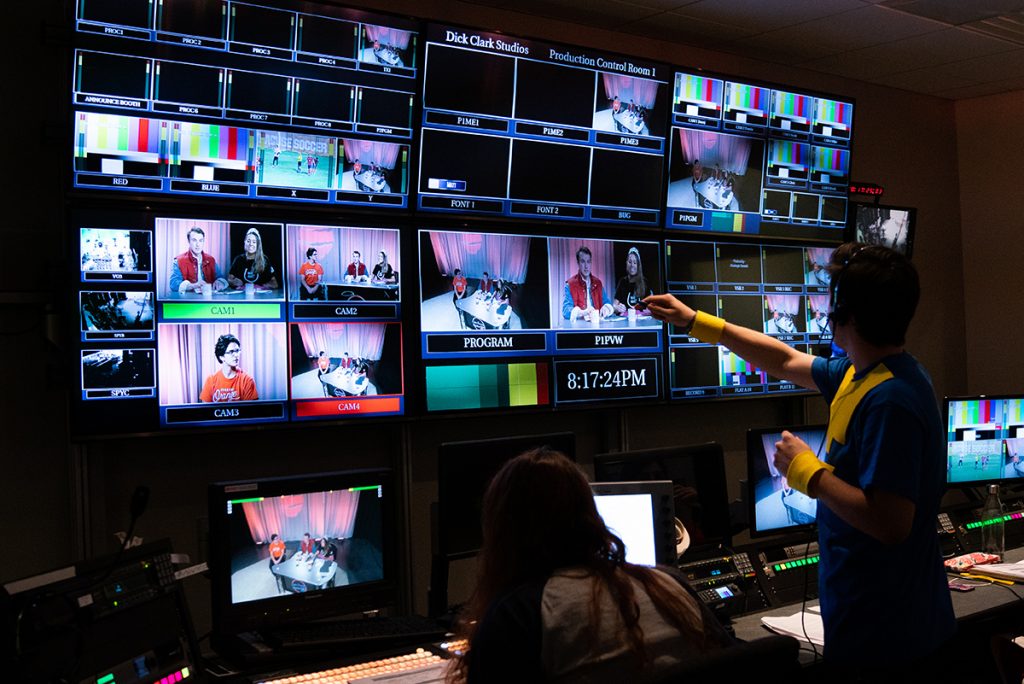 In the control room, Claire Chicchi, a sophomore broadcast and digital journalism major, and Chris Freeman, a junior in the TRF program and the head of content creation, give commands to the cast and crew on the floor to ensure the show is running smoothly. (Photo by Kai Nguyen.)

“I’ve always wanted to create content that makes people smile,” says Sammeth. “I kinda fell into ‘Live From Studio B,’ and it became something I actually wanted to do.”

Sammeth says “Live From Studio B” is her “first family on campus.

“This show has given me my best friends,” she says.

“I personally think that by joining the show, you can get one of the most in-depth professional experiences at Syracuse,” says junior TRF major Jonathan Paul “JP” Phillipe, a co-head writer. “We run everything like a real show would.”

Like Sammeth, Phillipe got his start on the show in his very first semester. He started in Newhouse as a broadcast and digital journalism student and originally applied to the show on a whim, not having much interest in comedy production. Since then, Phillipe has held multiple positions on the show, from writing sketches and cue cards to camera operation, and loved it so much that he switched his major to TRF.

“[People] come on as writers and content creators and [blossom],” Phillipe says. “We set real expectations for them, and they rise to meet them.”

“Nobody else is doing live comedy on TV [at Syracuse University], and these students get invaluable [professional] experience by learning to create [these] short comedy packages,” says Robinson. “Later, they could show this work to big comedy productions like Jimmy Fallon or Conan.”

“Live From Studio B” can be seen every other Sunday at 8 p.m. on the Orange Television Network.

Taylor Huang is a first-year newspaper and online journalism student at the Newhouse School.