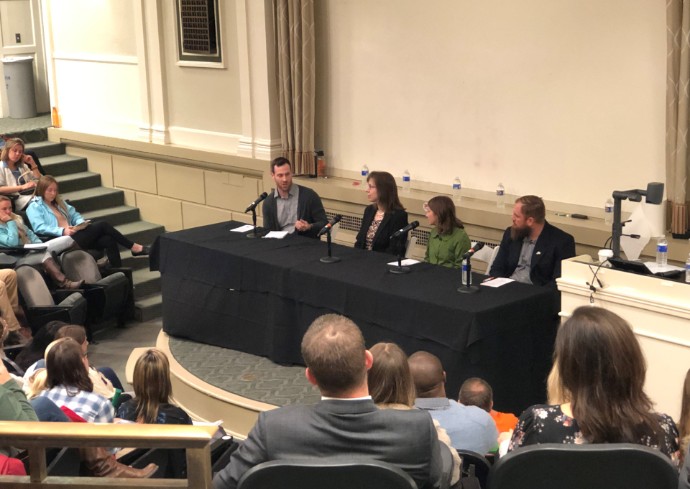 A reading of Sophocles’ play “Ajax” was part of the “Theater of War” performance at the recent veteran cultural competency training.

On Oct. 17, members of the Syracuse-area professional community gathered on Syracuse University’s South Campus for a full day of veteran cultural competency training followed by “Theater of War,” an innovative public health project designed to encourage thought and discussion around the impact of war and its challenges faced by military service members, veterans, their caregivers and their families.

Over 50 medical and mental health professionals, business leaders, human resources executives and administrators from around Central New York joined members of the Syracuse University faculty and staff for the event sponsored by the U.S. Department of Veteran Affairs Center for Integrated Health, Starbucks Coffee, Syracuse University’s Institute for Veterans and Military Families (IVMF) and the School of Social Work in the University’s Falk College. Through various interactive events, simulations and lectures, attendees learned best practices for delivering quality, culturally competent care and education for veterans and military families as well as how to acquire and implement the strategies for optimizing their performance and growth. Upon program completion, each participant earned 7.25 credits in evidence-based veteran cultural competence training.

“Trainings like this go a long way in creating more military-friendly communities and workplaces,” says Ken Marfilius, a United States Air Force veteran and professor in the Falk College’s School of Social Work. “The University’s readiness to provide this type of impact program speaks to the institution’s long-standing commitment to the military community and helps those who serve and employ veterans to bridge the military-civilian divide.”

“I know firsthand the power of experiential education,” said Tracy Walker, director of field instruction in the School of Social Work. “This program did a tremendous job engaging learners intellectually, emotionally, socially and physically. It caused me to put myself in a soldier’s shoes in a way that I have never done before and it resulted in my deepening respect and compassion for our soldiers.”

Following the instructional training, attendees enjoyed the latest rendition of the “Theater of War” performance series which included readings of Sophocles’ play “Ajax” to illustrate the sacrifice and struggle of service members, veterans, their caregivers and their families.

Well-known actors Juliana Francis Kelly of “The Girl From Monday,” “Sex and the City,” and “Maria Del Bosco;” Alex Grubbs of “Red Dead Redemption” and “Murder in Black and White;” and Chris Coffey of “Trust,” “The Good Wife” and “Law & Order: Criminal Intent” performed during the evening.