Syracuse University mourns the loss of J. Patrick “Pat” Barrett, a Life Trustee who died in September after a brief battle with leukemia. He was 82.

The Lake Placid native served on the University’s Board of Trustees for more than three decades. He also was a member of the Maxwell School Advisory Board from 1991-97, and supported various academic and athletic initiatives. Three of his seven sons—Brian L’04, Robb ’04 and Benjamin ’17—are University alumni. 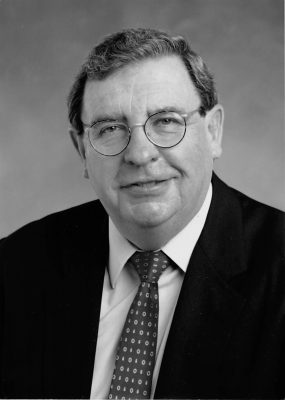 Barrett chaired the New York State Republican Committee from 1989-91, and was a delegate to the 1988 and 2004 Republican National Conventions. In 2010, he crossed party lines to co-chair Andrew Cuomo’s gubernatorial bid, and subsequently endorsed Democratic candidates in statewide and local races. The following year, Barrett became chair of the state’s Olympic Regional Development Authority, a post he held until his death.

Throughout his multifaceted career, Barrett was chair and CEO of Avis Inc.; executive vice president and CFO of Norton Simon Inc.; chair and CEO of CARPAT Investments, which he founded in 1987; and president of the regional telecommunications provider Telergy Inc. His leadership expertise also extended to Syracuse Executive Air Service Inc., an airplane charter company; Bennington Iron Works in Vermont; and PFF Vehicle Management Services in Maryland.

Barrett served on many other boards, including those of Coyne International Enterprises Corp.; Lincoln National Corp.; Adirondack Bank; Whiteface Club Cos.; the Syracuse SkyChiefs; Le Moyne College; St. Lawrence University; Georgetown University’s Walsh School of Foreign Service; and Sienna College, from which he earned a bachelor’s degree in economics. He lent his support to many causes and charities, including Hospice of CNY, the Dorothy Day House and Catholic Charities.