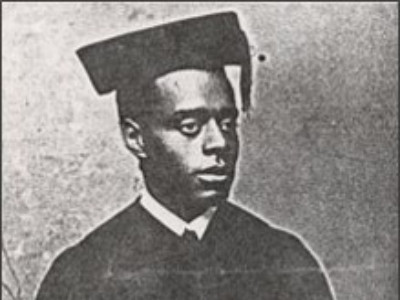 On Friday, Oct. 18, William Herbert Johnson L’1903, the College of Law’s first African American graduate, will be posthumously admitted to the New York State Bar in a ceremony at the Onondaga County Courthouse.

The event will be held from 10 a.m. to noon at the S.F. Hancock Ceremonial Courtroom, Onondaga County Courthouse, 401 Montgomery Street, Syracuse.

Born in Syracuse in 1875, William Herbert Johnson received his undergraduate degree from Boston University, served in the Army in the Spanish-American war of 1898 and then returned to his hometown and enrolled in the Syracuse University College of Law.

After his graduation from law school in 1903, Johnson was unable to gain admission to the New York bar. Notwithstanding the fact that he was not admitted to practice law, Johnson became a pillar of the Syracuse community, hosting such luminaries as Harriet Tubman and George Washington Carver, and opened doors of opportunities for others in the African American community that had been denied to him.

Johnson died in 1965 at the age of 90. Despite the fact that Johnson was not a lawyer, the minority bar association of Central New York was thereafter named the William Herbert Johnson Bar Association in his honor, and an award in his name is given annually by the College of Law.

Johnson will be admitted to the bar, posthumously, to correct this longstanding injustice and celebrate his many contributions to the Syracuse legal community and community at large.

For more information on the event, visit the College of Law website.