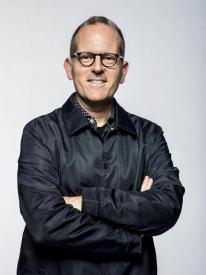 Corey duBrowa, vice president of global communications and public affairs at Google, will visit campus Oct. 16 as a guest of the Newhouse School. He will present “Google at 21: Analytics, Insights and Your Future” at 7 p.m. in the Joyce Hergenhan Auditorium, Newhouse 3. DuBrowa is the featured speaker for Social Commerce Days, sponsored by the Newhouse W2O Center for Social Commerce. Follow on Twitter at #SocCommDays.

DuBrowa joined Google in 2018. Before that, he was executive vice president and chief communications officer at Salesforce, during which time the company was named to the top spot in Fortune’s “Future 50” most innovative companies in the world, and was also named by Forbes as “Innovator of the Decade.”

Previously, DuBrowa served as senior vice president of global communications for Starbucks, which he helped to become the world’s fourth most admired brand, according to Fortune.

DuBrowa has earned multiple industry awards over the past 20 years, including four Holmes Report SABRE Awards, three PRSA Silver Anvil Awards and two PRWeek Global Awards. He was also named to the School of Journalism and Communications Hall of Fame at the University of Oregon, where he served as president of the alumni association for two years and was on the board for nearly 10 years.

DuBrowa currently serves on the executive committee of the the Arthur W. Page Society’s board of trustees, and is a founding member of the board of advisors for the Annenberg School for Communication and Journalism at the University of Southern California.

DuBrowa was a music journalist for two decades, with more than a thousand bylines in publications ranging from Rolling Stone to Village Voice to GQ.

Communication Access Realtime Translation (CART) will be available at the event. For more information, or if you require additional accommodations, contact Maria Russell at mprussel@syr.edu or 315.443.4066.