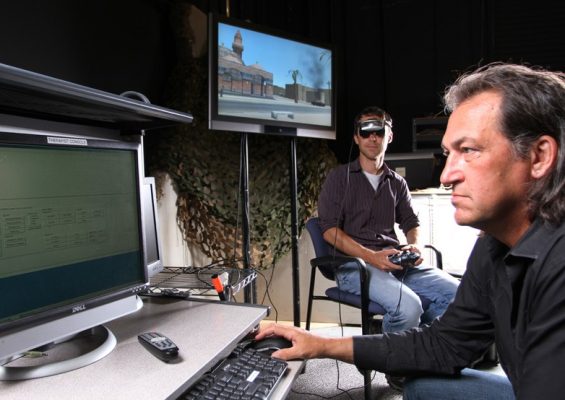 A unique partnership involving Syracuse University, the Syracuse Veterans Affairs Medical Center and two national nonprofits—Operation Hat Trick, which generates awareness and support for the recovery of wounded service members and veterans through branded merchandise sales, and SoldierStrong—has resulted in the donation of a groundbreaking virtual reality system to treat veterans experiencing post-traumatic stress. The Syracuse donation is the first of its kind in the country.

“The VA always strives to incorporate technology in meaningful ways that improve patient care and help to reduce symptoms of PTSD,” says Lauren Love, Syracuse VA Medical Center Behavioral Health Careline Manager. “This equipment presents an exciting opportunity to engage veterans with PTSD who may prefer to incorporate more technology into their treatment which will complement the offering of evidence-based treatments currently offered in the PTSD clinic.

“September is Suicide Prevention Month and this venture also provides a timely opportunity to incorporate creative new treatments aimed at reducing veteran suicide,” continues Love. “We are grateful for the opportunity to partner with SoldierStrong and thank Syracuse University and Operation Hat Trick for their extraordinary generosity.”

“We’ve been honored to help Operation Hat Trick serve so many veterans through our co-branding agreement, but it’s an exceptional thing to see it result in a donation to the local Syracuse community,” says Rachel Duffy, Syracuse University’s director of trademark licensing. “It’s a moment that should make the University’s many supporters proud.”

“Syracuse University works closely with the Syracuse VA and many other veteran-serving organizations to ensure that our veterans get the assistance they need and the care they deserve,” says Haynie. “This donation is another prime example of the power of partnership and connection among all veteran service organizations to achieve a greater good. For that reason, we are proud to support SoldierStrong and Operation Hat Trick’s efforts to make this creative technology an integral part in the treatment and recovery of veterans here in Central New York, and across the country.”

Since SoldierStrong’s inception following the tragic events of 9/11, the Stamford, Conn.-based group has donated more than $3 million of medical devices to help injured veterans, including 22 state-of-the-art exoskeleton that aid in the rehabilitation of spinal injuries.

“Virtual reality treatment shows promise in two key areas,” says SoldierStrong co-founder Chris Meek. “It is both clinically effective and it reduces the stigma that many service members feel about seeking treatment for their post-traumatic stress. With the rise in popularity of virtual reality in non-medical settings, such as video games, entertainment and even the workplace, there’s convincing evidence that younger veterans will be more inclined to seek treatment using virtual reality techniques than other methods.”