‘Be Patient, but Move Fast’: An Interview With Entrepreneur Josh Aviv ’15, G’17 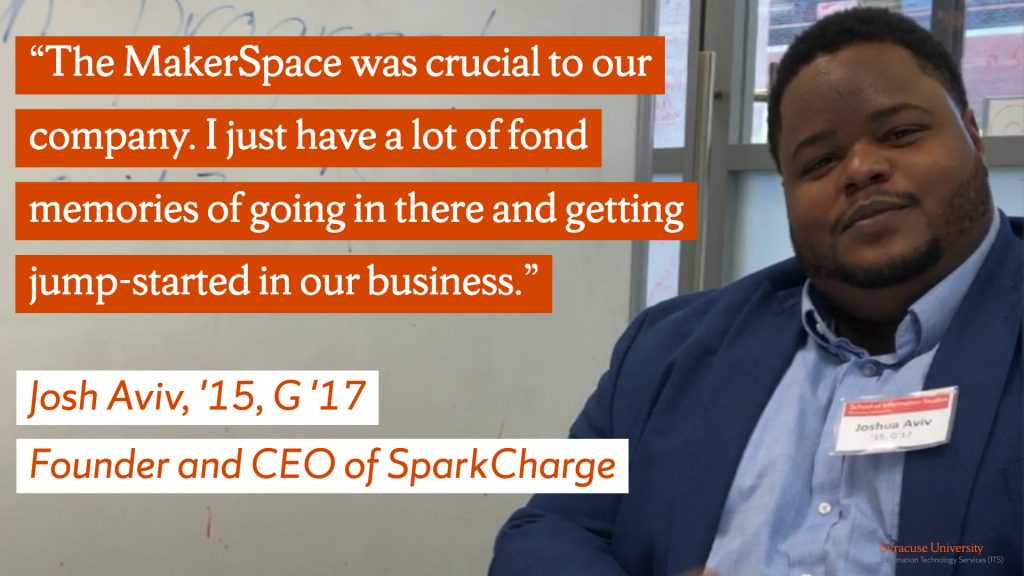 Syracuse University alumnus Josh Aviv ’15, G‘17 is the founder and CEO of SparkCharge, a startup that manufactures portable high-speed chargers for electric vehicles. Aviv began working on his startup during his time as a student at Syracuse by utilizing several innovation hubs on campus, particularly the MakerSpace located in the Kimmel Computer Lab.

“The MakerSpace was crucial to our company,” he said in an interview with Information Technology Services. “I just have a lot of fond memories of going in there and getting jump-started in our business.”

As part of the 2019 Orange Central celebration, Aviv returned to his alma mater to host two Fireside Chats at the Blackstone LaunchPad, a campus-based entrepreneurship program based in Bird Library. During these chats, Aviv discussed how he built SparkCharge from the ground up and provided the audience with insight into how to develop their own entrepreneurial ideas.

The MakerSpace’s 3D printers were a huge help to Aviv as he began to construct the portable charging units that formed the basis of his company. The printers enabled him to design prototypes and intricate parts for the devices. Aviv said he found the printers so useful that he later purchased the same model of 3D printer for his company after he graduated.

Beyond 3D printers, the MakerSpace houses a wide range of technological resources for students to utilize, including textile machines, a laser engraver and other machines. Through the MakerSpace, Aviv found an outlet for his entrepreneurial spirit and received the opportunity to make significant progress toward achieving his dream of starting his own company.

Aviv also used the MakerSpace’s laser engraving machine and t-shirt maker to create marketing materials that would become essential in his startup’s efforts to get off the ground.

The MakerSpace is open from 10 a.m. to 8 p.m. on weekdays, and from noon to 6 p.m. on weekends. All Syracuse University students are welcome to use the center, whether they are interested in computer science, design, engineering or any other field. The MakerSpace has several staff members—including lead technologist John Mangicaro—who can show students how to use the center’s various machines and help them realize their visions for a particular product or design.

“We practically lived in the MakerSpace,” Aviv said. “We’ve been working with (Mangicaro) pretty much since day one. He’s so knowledgeable about the tools you have at your disposal as a student that it makes getting things done a lot easier.”

Aviv encourages Syracuse University students to explore the MakerSpace and utilize its technologies and bounce ideas off of its staff. With the help of the MakerSpace, Aviv was able to turn his dream of starting an innovative and successful technology company into a reality. To students who hope to achieve the same entrepreneurial success as Aviv, he offered this advice:

“Be patient, but move fast at the same time. If I could go back in time, I would tell my younger self, ‘Hey, it’s going to take a long time to take something that doesn’t exist in the market and the world and bring it to fruition and actually make it happen. That doesn’t happen overnight. So be patient.’”

Story by ITS student-worker Gillian Follett ’22.