The allure for travel to faraway lands is a compelling prospect for many that look to serve in the United States military–most branches even advertise travel and adventure as one of the perks of joining. Like many potential applicants, Zach Watson ’20 and Tristan Carson ’20 both came from small towns, Watson from Constantia, New York and Carson from Fortuna, California. They both enlisted in the Marine Corps soon after graduating from high school, and both would eventually be awarded an opportunity to study abroad using the Benjamin A. Gilman International Scholarship while attending Syracuse University as student veterans. 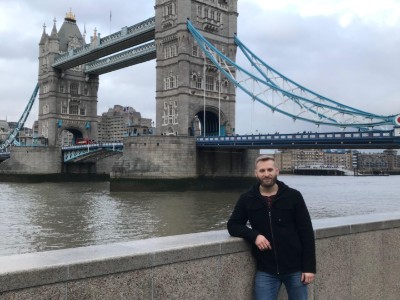 Inspired by his father’s service, Watson served just over four years in the Marines as an avionics technician working on helicopters across the country. While travel was also a key motivator in his oath to serve, he didn’t get the chance to deploy while in the Marine Corps. At the end of his active service he opted to get out and focus on his education.

Carson, on the other hand, did get to see the world during service. After graduating from high school in 1998, he joined the Marine Corps and became a motor vehicle operator stationed in Okinawa, Japan, for two years. Like many service members, Carson left the service to put all his experience to use and found the resiliency he honed in the military to be one of his most reliable traits. He attempted several different jobs and attended two different schools, but neither provided the passion or purpose he sought.

Carson and Watson both found their way to Syracuse University through different avenues.  Watson had grown up nearby and was aware of the prestigious nature of Syracuse, while Carson found out about the school after meeting Ron Novack, executive director of the Office of Veteran and Military Affairs (OVMA) at Syracuse University, while attending a conference hosted by the Student Veterans of America.

“Being at Syracuse just clicked with me after hearing about their resources for veterans and their commitment to be the best place for veterans,” Carson says. “I got this nice, thick acceptance letter and arrived on campus in 2017.” 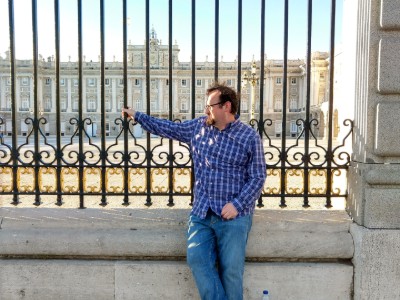 Watson is currently pursuing his degree in political science through the College of Arts and Sciences and the Maxwell School of Citizenship and Public Affairs, as well as studying for his graduate records examination in preparation for a graduate degree. Carson is studying English with a minor in education from the College of Arts and Sciences. It was during their individual courses of study that the itch to travel returned, compelling them both to apply for the Gilman Scholarship.

The Benjamin A. Gilman International Scholarship is a grant program funded through the U.S. Department of State.  It enables students of limited financial means to study or intern aboard, thereby gaining skills critical to national security and economic prosperity.  As a nationwide scholarship, the program is competitive. In 2017-18 the program received over 11,000 applications and only awarded 3,276 scholarships.  Successful applicants can be awarded amounts from $100 to $5,000. Applicants are evaluated on their academic preparedness and impact as well as their diversity of background and experience.

Carson and Watson both put a lot of time into their applications. Watson specifically wrote and rewrote his essay five times over the course of a month.

“I worked with Jolynn Parker, the director of the Center for Fellowship and Scholarship Advising and applied but didn’t get my hopes too high,” Watson says. “I grinded away at the application because I really wanted to go abroad.”

The hard work and determination paid off. Watson earned a fully-funded semester through the Gilman program and studied in London in spring 2019. There, he stretched to find his way into the new community of students, especially as he was the only student veteran abroad. He was able to fulfill his desire to travel, spending time in Amsterdam, Barcelona, Belgium, Hungary, North Africa and Madrid.

Carson had studied abroad once before coming to Syracuse University, spending time in London. With the Gilman Scholarship he spent the summer in Madrid, diving into the culture by attending group activities, tours, book fairs, taking an art class and participating in cheese and olive oil tasting events.

“I was abroad for six weeks over the summer.  It was a fantastic and awesome experience.  I really challenged myself there,” Carson says.

Upon returning to Syracuse, Carson became more engaged in the Student Veterans Organization, and currently serves as the public affairs officer for the group. He hopes to eventually work in a study abroad program to help offer the same experience he enjoyed to other students.

Watson plans to pursue a government career with the Central Intelligence Agency or Department of Defense or put his degree to use with a think tank or other organization. For now, he is back on campus with a whole new network of fellow students that he never would have met without the Gilman scholarship program.

Students interested in the Gilman scholarship can get more information and apply at gilmanscholarship.org or contact Jolynn Parker at jmpark02@syr.edu.