The Syracuse University Human Rights Film Festival (SUHRFF) returns for its 17th year with an outstanding lineup of critically acclaimed films addressing social justice and human rights issues in the United States and around the world.

Being held Sept. 26-28, the film festival is part of Syracuse Symposium 2019: SILENCE and is presented by the Syracuse University Humanities Center in the College of Arts and Sciences and the S.I. Newhouse School of Public Communications. Co-sponsored and supported by over 25 academic units and organizations, SUHRFF is an interdisciplinary event that embodies the vision of Syracuse University—preparing engaged citizens, scholars and leaders for participation in a changing global society.

“This year’s Syracuse Symposium theme of ‘Silence’ resonates deeply with our festival because the very ethos of human rights filmmaking lies in the struggle against silence, against powers of censorship, exile, marginalization and disenfranchisement,” says Roger Hallas, associate professor of English and co-director of SUHRFF. “Film not only gives voice to those who have been silenced, but it also finds creative and compelling means to represent the silences that perpetuate injustice and oppression.” 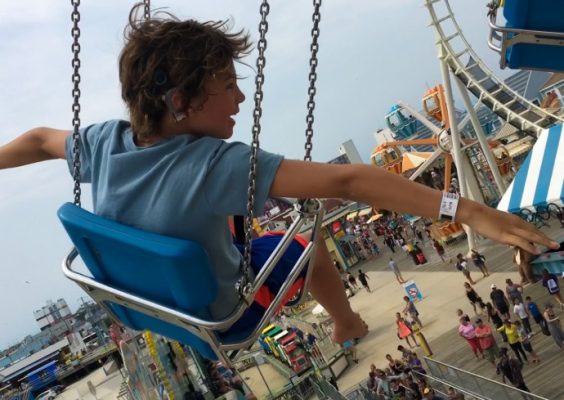 All screenings are free and open to the public; no tickets are required. DHH accommodations will be provided.

SUHRFF opens on Thursday, Sept. 26, at 7 p.m. in the Joyce Hergenhan Auditorium, Newhouse 3, with a screening of “Moonlight Sonata: Deafness in Three  Movements” directed by Irene Taylor Brodsky. Premiering earlier this year at the Sundance Film Festival, the film delves into an intergenerational exploration of living with deafness within the filmmaker’s own family. The film will be followed by a panel discussion with Michael Schwartz, associate professor of law and director of the Disability Rights Clinic, and Beth Ferri, professor of disability studies and inclusive education in the School of Education.

“We’re excited to screen this deeply moving and artistic film for opening night,” says Tula Goenka, professor of television, radio and film in the Newhouse School and co-director of SUHRFF. “As soon as I saw the film at Sundance in late January, I knew we had to secure it for a screening on campus, for seldom has a film woven together the themes of family, disability and creativity with such intimacy, grace and insight.”

The festival continues with a screening of “Words from a Bear,” on Friday, Sept. 27, at 7 p.m. in the Joyce Hergenhan Auditorium, Newhouse 3. Also premiered at this year’s Sundance Film Festival, former transmedia faculty member Jeffrey Palmer’s documentary presents an exquisitely crafted portrait of Navarro Scott Momaday, one of Native America’s most celebrated writers, drawing on revelatory interviews, epic landscape cinematography and expressive animation. Palmer will introduce the film and participate in a Q&A.

The theme of “Silence” continues on Saturday afternoon at the Shemin Auditorium in the Shaffer Art Building with screenings of “Everything Must Fall,” documenting the ongoing struggle of South African college students for transformational, intergenerational justice and decolonized higher education a quarter century after the end of apartheid; “The Silence of Others,” an exciting and moving story of the groundbreaking international criminal case to break contemporary Spain’s culture of impunity around the atrocities and abuses of General Franco’s 40-year dictatorship; and “The Sweet Requiem,” a beautifully rendered fictional tale about the trauma of exile for the Tibetan refugee community living in New Dehli.

SUHRFF is co-sponsored by the David B. Falk College of Sport and Human Dynamics; School of Education; Hendricks Chapel; Department of History; Department of Languages, Literature and Linguistics; Citizenship and Civic Engagement program; International Relations program; Latino-Latin American Studies program; Native American and Indigenous Studies program; Program for the Advancement of Research on Conflict and Collaboration (PARCC); and the South Asia Center.

All films are either open-captioned or subtitled in English. Communication Access Realtime Translation will be available at all screenings for the introductions and discussions. If you require other accommodations, please contact Kristen Northrop (kmnorthr@syr.edu or 315.443.7358) by Sept. 15.

Full information can be found on the festival website at suhrff.syr.edu.