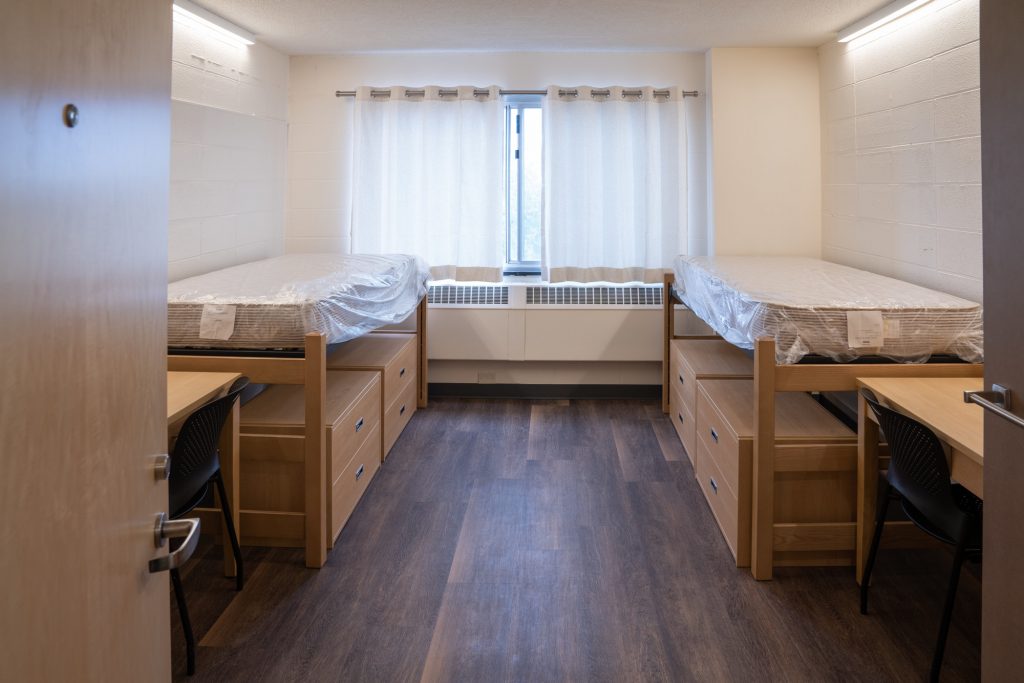 As summer 2019 came to a close, the Syracuse University campus was a hive of activity. Last-minute paint touch-ups went onto walls, closet doors were re-adjusted and the crinkling sounds of plastic-wrapped mattresses filled the hallways of DellPlain Hall. This summer marked the first year of a two-year renovation project at DellPlain, the latest in a series of top-to-bottom renovations in the University’s residence halls.

At DellPlain, this summer’s work focused on renovating student rooms, lounges and common areas on floors six through eight. Beyond making the student rooms fully accessible, new finishes, flooring and student room furniture were installed and new IT infrastructure was constructed.

Student rooms also received new doors and lighting, adding a more modern look to the rooms, which were originally constructed in 1961. The lounge on the ground floor was completely overhauled, with new furniture selected for the space. Three team study rooms were added, and modern study spaces will allow students to carve out quiet areas for work. The project will wrap up next summer, with floors one through five scheduled to undergo the same improvements.

The design and construction of the new rooms are handled by the office of Campus Planning, Design, and Construction (CPDC), which designs the spaces and selects fixtures in consultation with Auxiliary Services, Housing and the Office of Student Living.

“We want to create and deliver the most attractive spaces possible,” says Mike Haggerty, senior project manager at CPDC. “We also consider durability in selecting furniture. We want to provide a classic look for student rooms that allows students to create their personalized living environment.” 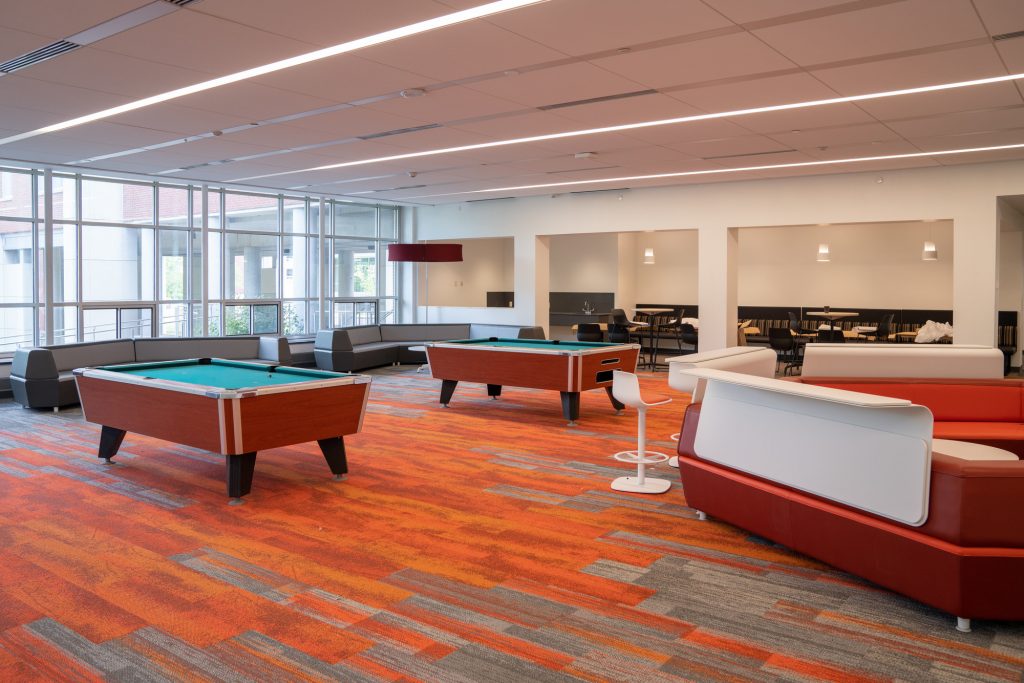 Student input plays a part in the selection as well. Eileen Simmons, the director of the Office of Housing, Meal Plan, and I.D. Card Services, says that student feedback led to smaller desk sizes. “Students have laptops and don’t need traditionally sized desks anymore,” says Simmons. “They also need less space for TVs—the introduction of streaming services means that they’re watching on their tablets or phones instead.”

This summer also marked the conclusion of three years of renovations at Day Hall, which provided students with updated single-user accessible restrooms throughout the building, renovated student rooms and lounges on every floor, and an updated lounge on the first floor.

The work in Day and DellPlain is the latest in a long line of renovations undertaken by Auxiliary Services and CPDC in the past decade to upgrade student living facilities.

Jennifer Uryniak, interim director of Auxiliary Services, reflects on how student expectations have changed rapidly over the past few years. “Technology plays a larger role—and we’re adapting the residence halls to accommodate those needs by constructing smart study rooms with built-in technology, large-screen televisions with gaming plug-ins for lounges, and we’ve also had requests for package lockers to accommodate online orders.”

Uryniak has also seen a greater expectation of privacy among students and their parents, and notes that the University has responded by installing single-user, gender-neutral bathrooms in each residence hall.

Work on DellPlain and on other projects across campus will begin again the day after Commencement in May 2020.

After 30 years at Syracuse University, Associate Chief Information Officer (ACIO) for Academic Technology Services Jenny Gluck has announced her retirement, effective at the end of January. Mike O’Mara, Director of Learning Environments and Media Production, will serve as interim…

Undergraduate students seeking paid research assistant positions to work with faculty mentors on research and creative projects can apply for those opportunities in February and March. Students interested in funded positions for summer 2023 and/or academic year 2023-24 should submit…

Move over, men’s soccer team. There’s another team on campus vying for a national championship. Eight sport analytics students from the Falk College of Sport and Human Dynamics will compete Feb. 1-2 in the AXS National Collegiate Sports Analytics Championship…