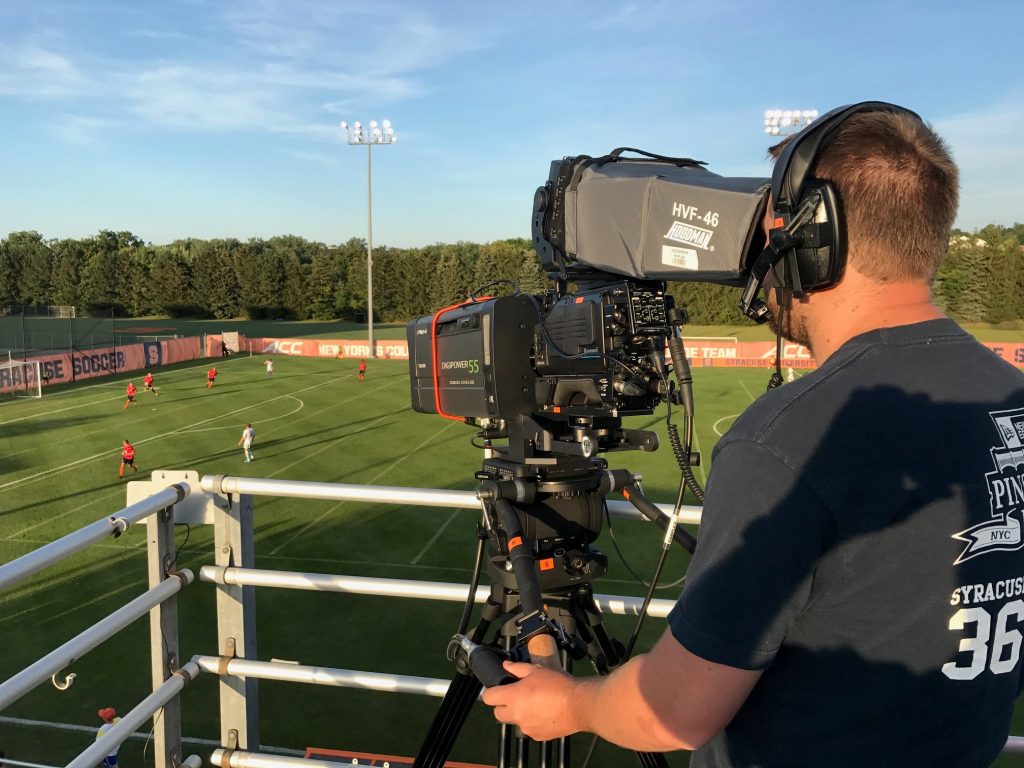 Syracuse University’s first appearance on the new ACC Network is Sunday, Aug. 25, at 7 p.m., when the Orange men’s soccer team opens the season against Colgate at the SU Soccer Stadium.

For the past three years, Syracuse University has been immersed in large-scale, campuswide infrastructure improvements to prepare for the launch of the ACC Network (ACCN). In partnership with ESPN, the ACCN will feature around-the-clock linear broadcasts of Atlantic Coast Conference athletic events and programming beginning today.

Work began in 2016 to allow the University to broadcast games on the ACC Network Extra (ACCNX), the digital-only predecessor to the ACCN that allows fans to stream games exclusively through the ESPN app. To meet the goal of being “TV-ready” for ACCN linear (that is, traditional) broadcasts in 2019, an extensive connectivity overhaul was needed, in addition to technology and equipment enhancements that improve the viewer’s experience and create a seamless, gold-standard production.

The story of how Syracuse University brought its campus infrastructure to the caliber required for professional-grade, linear broadcasts was no small feat—and in many ways encapsulates a spirit that carries through all of Syracuse Athletics: a spirit of teamwork, innovation and thinking ahead.

It’s all about connectivity

The crux of the infrastructure upgrades needed for the ACCN was connectivity. Over a series of months back in 2017, the University installed an extensive network of fiber optic cable underground to connect seven Orange athletics facilities to Dick Clark Studios in the Newhouse School. The fiber (552 strands of it, to be exact) sends audio and video from the Dome, J.S. Coyne Stadium, the SU Soccer Stadium, the Skytop Softball Stadium, the Tennity Ice Pavilion and Gym A in the Women’s Building to the studios in Newhouse 2, which have served and will continue to serve as a primary control room for both linear and digital broadcasts on the ACCN and ACCNX. It also connects to a bureau camera room in Manley Field House that accommodates live pre- or post-game interviews with coaches and student-athletes at any time for ESPN and ACCN shows.

“We were already set up in a basic sense for multi-camera productions at several of our venues, but the connectivity upgrades really enhanced our camera positions and wired every single camera position for TV,” Syracuse Athletics broadcast engineer Tom White explains. “We put fiber optic cables and power in each camera position at each venue, including where our play-by-play and color commentary talent is located, and it all feeds back to the control room at Newhouse.”

To bring the necessary ACCN connectivity upgrades to completion, ESPN was on campus earlier this year installing dedicated transmission lines from Newhouse 2 directly to the network’s headquarters in Bristol, Connecticut. 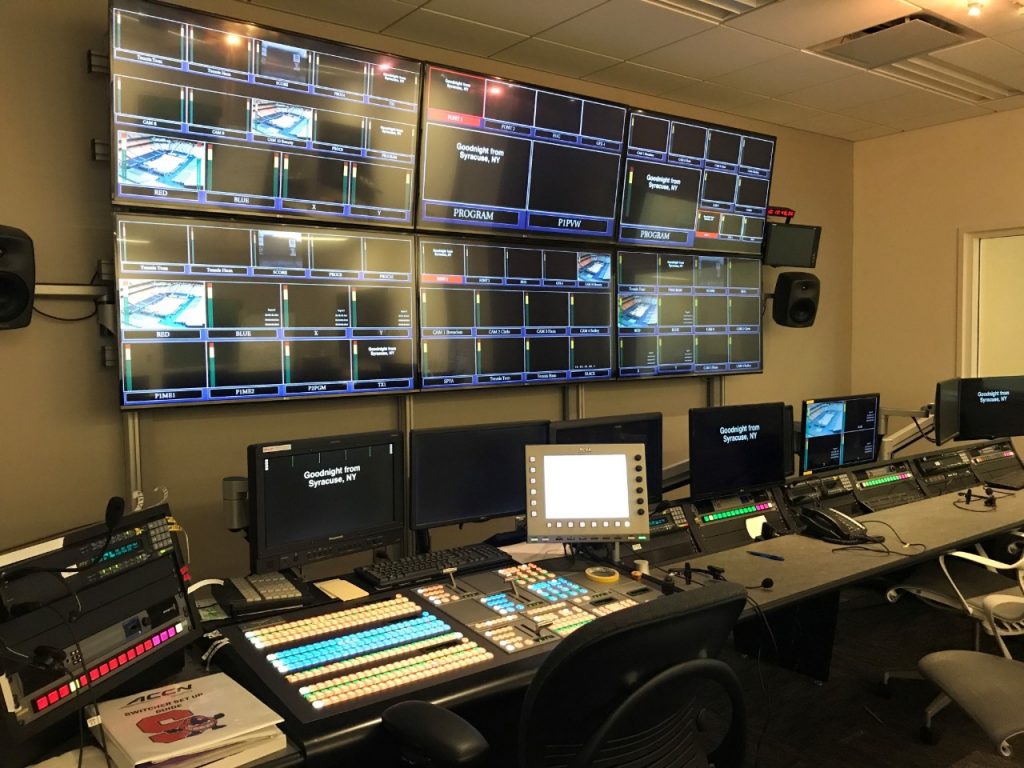 Having state-of-the-art production studios at Newhouse that could serve as a central production room for ACCN broadcasts, without extensive upgrades, has been instrumental to getting Syracuse University broadcast-ready. While other ACC member institutions were likely faced with building control rooms from the ground up to support productions, the University had already renovated the Dick Clark Studios in a way that met many of the ACCN requirements.

“When we renovated the studios seven years ago, Syracuse had just joined the ACC and there was talk about an ACC Network,” recalls Neal Coffey, manager of operations and engineering at Newhouse. “So I said, ‘What if we turned Newhouse into the communications hub for campus?’ We built it with the broadcast infrastructure and though we didn’t yet have the connectivity to the athletics venues, our control room was ready to go for a high-end sports broadcast.”

“This project relied heavily on Newhouse and their willingness to jump in and partner with us on the upgrades,” says Morey Mossovitz, associate athletics director for facilities and event operations. “They have beautiful studios and had already built a great foundation of professional equipment. We were able to go in and make the additional investments needed to bring the studio up to the standards required to do an ESPN-level linear production.”

Additional studio upgrades included installation of a replay device with a greater number of inputs and outputs to accommodate four different replay channels, an upgrade to the graphics systems, and installation of a higher-capacity router to handle the additional video sources from each venue.

At the athletics venues, the University had to ensure that the number of cameras met the five-camera minimum requirement for a linear broadcast set by ESPN. For some of these cameras, an investment was made in larger lenses to increase the ability to zoom in tight on specific visuals to enhance productions. “We’ve also added point-of-view cameras that can be set up in a field hockey goal or next to the back of a soccer goal, or positioned to shoot the rim in a basketball production. Small upgrades like this can really make a difference in the quality of the broadcast and how the viewer experiences the game,” says White.

“We live in an era where fans aren’t just streaming on their laptop or mobile device, but often playing content on their TV sets at enormous sizes,” says Mossovitz. “Because of the upgrades we did at the studios and the venues, there will be a dramatic visual difference.”

That said, there will be no discernible difference to the viewer between a digital broadcast (on ACC Network Extra) and a linear broadcast (on ACC Network) when it comes to Syracuse Athletics productions. Because of the extent of the infrastructure investments the University has made, the technology can be leveraged no matter what kind of broadcast is being produced. “That will lead to ESPN and our partners being much more interested in taking Syracuse games, because we’re a proven entity,” Mossovitz says. “We’ve shown that we have the right camera locations, we’ve proven that we can produce a seamless, high-quality broadcast.” 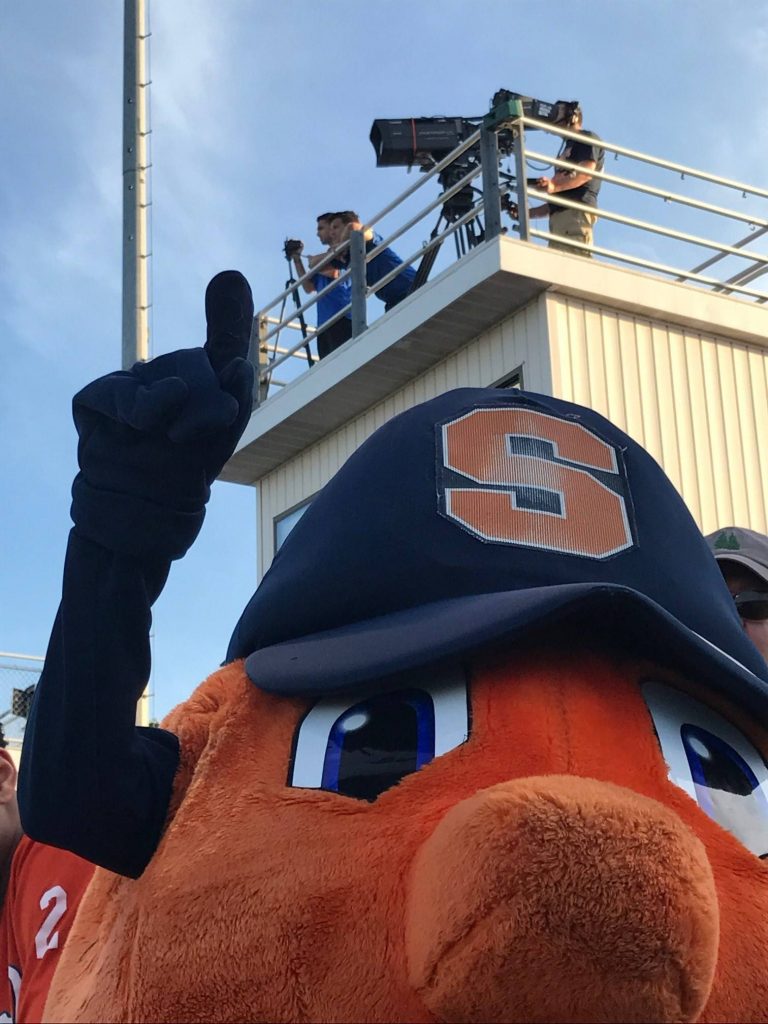 Otto knows the direction in which the ACCN is heading.

When it comes to future and ongoing enhancements to sports broadcasting infrastructure, Syracuse University is well-positioned to stay ahead of the curve. “We’re in really good shape right now, but TV production and anything related to media or technology in the sports field will be constantly changing,” Mossovitz says. “Luckily, we have a lot of innovators on our team, like Tom and Neal. They consistently come up with ideas, new things to try, different ways of doing things to improve the end product, and all with the goal of being as cost-efficient as possible. One of the University’s tenets is being economically smart, and we mirror that in Athletics.”

One future enhancement that may be necessary is building out additional control rooms to accommodate more broadcasts. The 2018-19 academic year boasted more than 100 Syracuse University productions, and it’s anticipated that number will be exceeded in 2019-20.

“I can’t tell you how rewarding it is for me to stand in the back of the control room during a game and see the vision that we had for our studios a few years back come to life,” says Coffey. “We’ve been doing the digital broadcasts for two years now. We’re confident. We’re ready to go.”

“The teamwork that has gone into this project and the people I’ve worked with in Athletics and at Newhouse have been a joy,” White adds. “We all came together to get the work done, and I think we produce a pretty good end product here at Syracuse University.”

To learn more about the ACC Network, check out the launch story. To find a provider in your area, visit getaccn.com.