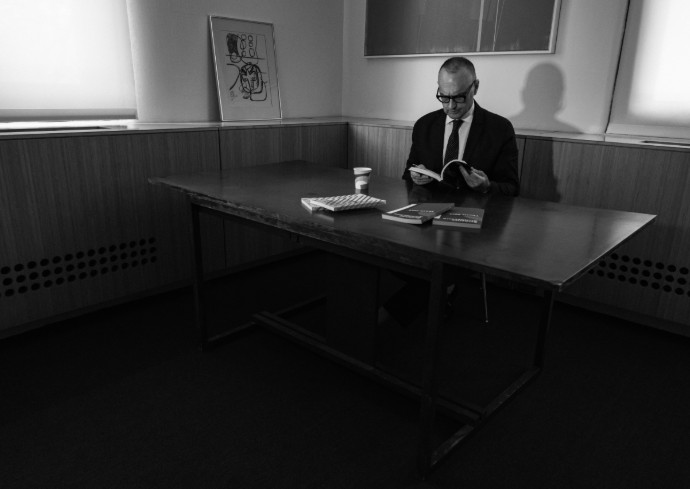 Syracuse Architecture Dean Michael Speaks sitting at the desk of renowned architect-designer Marcel Breuer, which was recently donated to the school.

An original desk that once belonged to the celebrated modernist architect-designer Marcel Breuer has been donated to the School of Architecture. The school received the gift from Judith Papachristou, the widow of the late Tician Papachristou, an internationally known modernist architect and author who worked alongside Breuer for more than a decade.

Breuer, one of most influential architects of the 20th century, actually began his career designing furniture at the modernist Bauhaus School of Design in Weimar, Germany; the school this year is celebrating the 100th anniversary of its founding. Perhaps the most widely recognized of Breuer’s early designs was his design for the first bent tubular steel chair, later known as the “Wassily” chair, which was inspired, in part, by the curved tubular steel handlebars on his Adler bicycle. Even today, this chair remains one of the most recognizable examples of the modern furniture movement. Breuer also experimented with bent and formed plywood, producing a series of five pieces, including an armchair, chaise lounge and nest of tables that are now regarded as landmarks in 20th-century furniture design.

Although he is best remembered for his iconic chair designs, Breuer’s real interest was architecture. As an architect, he took on many projects of enormous size and scale. A pioneer in the use of steel and glass, Breuer had an affinity for concrete that later made him a key figure in the emergence of Brutalism. Over the course of his career, he designed more than 70 private houses and multiple university and office buildings. Among his most noted buildings are the UNESCO headquarters in Paris (1953), the Whitney Museum of American Art in New York (1966), buildings on the campuses of New York University and St. John’s University in Collegeville, Minnesota, and the Cleveland Museum of Art (1970).

In 1976, Breuer retired from active practice. He passed away five years later, at the age of 79. Tician Papachristou, a partner in Marcel Breuer Associates, was given Breuer’s personal desk from the firm. The desk has since remained in the Papachristou family home in Sheffield, Massachusetts, and, according to Judith Papachristou, was used by Tician to write his memoirs.

Born in Athens, Greece, Papachristou came to the United States in 1945. After receiving bachelor’s and master’s degrees in architecture from Princeton University, he and Judith moved west to Boulder, Colorado. There, Papachristou taught design at the University of Colorado and assisted I.M. Pei with research for the location and design of the National Center for Atmospheric Research. Upon the recommendation of Pei, Papachristou was hired by Breuer and left Colorado for New York. He joined Breuer’s firm in 1965 and by 1974 was made partner. Papachristou died in 2018 at the age of 90. He was co-author of the book “Marcel Breuer: New Buildings and Projects, 1921-69” (1970).

This last year, Judith Papachristou contacted Syracuse University through architect Bruce Fowle ’60, Syracuse Architecture alumnus and a former member of the school’s board of advisors, to see whether there might be interest in the desk. Given the reputation of the School of Architecture and the connection to Breuer—he began donating his papers to Syracuse University beginning in the late 1960s—she believed that the University would provide the right home for the desk. “If Tician were alive today,” she recently remarked, “he would agree that Breuer’s desk belongs at Syracuse University.”

The Marcel Breuer Papers, housed at Syracuse University Libraries Special Collections Research Center (SCRC), collects more than 60 years of work from every phase of Breuer’s long and distinguished career. Indeed, the desk matches a design found in the Marcel Breuer Digital Archive, a project led by SCRC in partnership with the School of Architecture that united geographically separate collections into an online edition of over 120,000 drawings, photographs, letters and other materials covering Breuer’s life’s work. An image of the Breuer desk and its accompanying metadata will be added to the digital archive.

Dating back to 1956, Desk No. 2 is an excellent example of the manner in which Breuer’s designs evolved throughout his career. Unlike the work he designed as production pieces, this desk lacks the tubular steel featured in many of his commercial designs and, instead, combines plywood and micarta, a hard composite material often called “the steel of the plastic industry.”

“There is a simultaneous warmth and modernity to the desk resulting from its construction and use of materials,” writes Dr. Jonathan Clancy, principal of Jonathan Clancy Art Advisory in his appraisal report. “The presence of hand-cut dovetails and use of wood testify to the desk being bench-made by a craftsman, while the laminate top emphasizes the desk’s functional modernity.”

Due to its uniqueness, rarity of form, and ownership and use by Breuer, the desk will live at the School of Architecture in Slocum Hall.

“We are thrilled to receive this truly remarkable desk,” says Syracuse Architecture Dean Michael Speaks. “It is a precious object designed by one of the great designers of the 20th century. But it also memorializes the collaboration and friendship of Breuer and Papachristou. Sitting at the desk, one can picture each of them, at different times in their careers, working, making drawings and notes. It is truly an honor to have it at the school.”