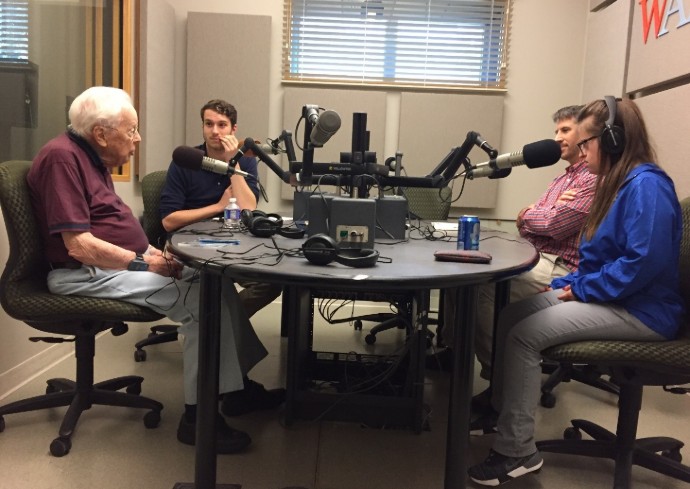 Waful, who received earned bachelor’s and master’s degrees at Syracuse University in 1937 and 1939, respectively, has been an icon in the Central New York community and on campus for decades. A member of the Alumni Glee Club, Waful is one of the University’s oldest living alumni and longest-tenured football fans. As an American prisoner of war from 1942 through 1945 during World War II, Waful maintained a journal of his experiences. “You Don’t Surrender: Journal and Memoirs from Don Waful, a World War II P.O.W.” chronicles both the journal he maintained, along with a memorial perspective from Waful himself in the form of interviews conducted at WAER. The audiobook also includes historical commentary interspersed throughout the chronicles.

Historically, “Sound Beat” has been a 90-second daily radio program based on recordings from the Belfer Audio Archive, part of Syracuse University Libraries’ Special Collections Research Center. “Sound Beat” is broadcast in more than 360 markets nationally and internationally, and each episode focuses on a particular recording and provides a short backstory detailing its place in the landscape of recorded sound. “Sound Beat: Access Audio Chronicles” is a new longer form program that extends the “Sound Beat” concept by enabling the creation of new knowledge and cultural exchange and advancing teaching, learning and research through the oral documentation of interviews, journals, experiences and perspectives from primary sources. It also extends Syracuse University Libraries’ commitment to accessibility and inclusion by providing resources to those who may not be able to read or process traditional print books or prefer listening to books.

“Sound Beat,” both the 90-second interstitials and the longer form “Access Audio Chronicles,” also provides an opportunity to incorporate applied learning for Syracuse University students who help to research, write and promote the episodes. Recently, students with intellectual and developmental disabilities from The Taishoff Center for Inclusive Higher Education (InclusiveU) have begun working with “Sound Beat.”

In addition to reading and recording the journal entries, they have interviewed Waful several times on topics ranging from his time as a student to key events that occurred during the war. Each interview and interaction has provided more depth to Waful’s character and unique story as a student and veteran, his outlook on life and his loyalty to his alma mater. Through the interviews and his journal writings, Waful has shared his despairs while captured along with his hopes for his future.

As part of Orange Central, the team will be speaking about the experience of bringing the journal to life, complete with a Q&A session with Waful himself. The event is Saturday, Sept. 14, at 10:30 a.m. in Bird Library.