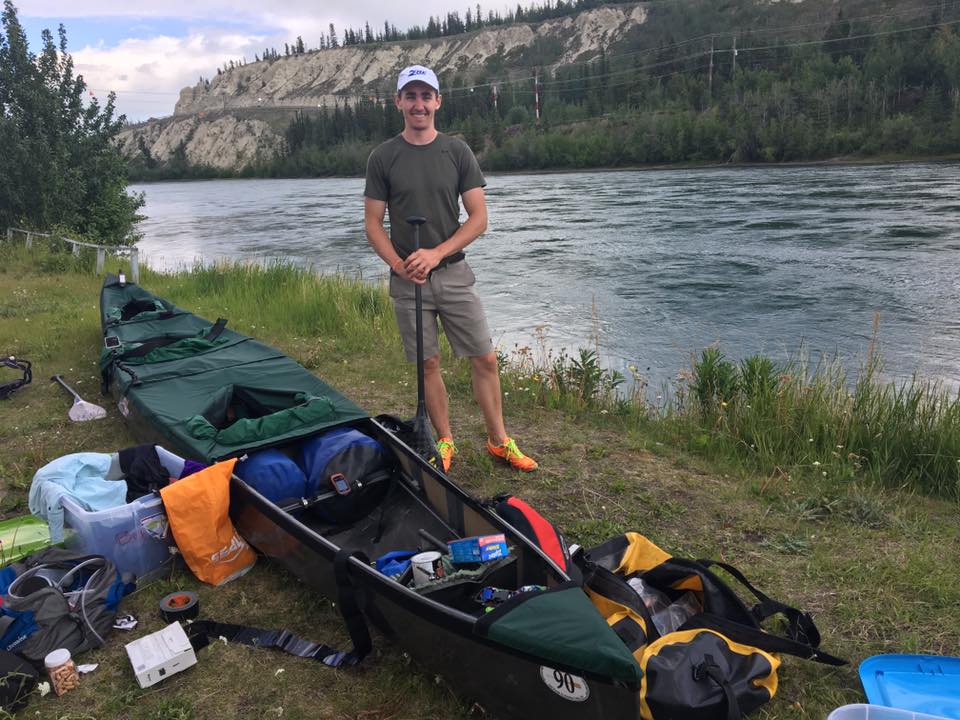 Whitman School staff member Ben Schlimmer prepares for the 2017 Yukon River Quest in June 2017. The race was a 715-kilometer trek from Whitehorse to Dawson City in the Yukon territory in Canada. Schlimmer competed as part of a four-person canoe, and his team finished first in the mixed category. Schlimmer is headed this month to Thailand to participate in his second International Dragon Boat Federation World Cup.

Ben Schlimmer’s agility and passion for paddling watersports was most certainly passed down from his father and grandfather.

A son of a canoe enthusiast and grandson of a Boy Scout troop leader who led adventurous water excursions, Schlimmer has adeptly kept up the family tradition. His skill has taken him even further.

A centuries-old sport that originated in China in honor of poet Qu Yuan (343-278 BC), dragon boat racing features 40-foot long, 500-pound boats decorated in bright colors and outfitted with a dragon head and tail. The competition brings team collaboration to a whole new level. Canoeing and kayaking typically may only have one or two paddlers, but the dragon boat is propelled by a team of 20, with a steersman shouting orders and a drummer to keep the paddlers in sync. 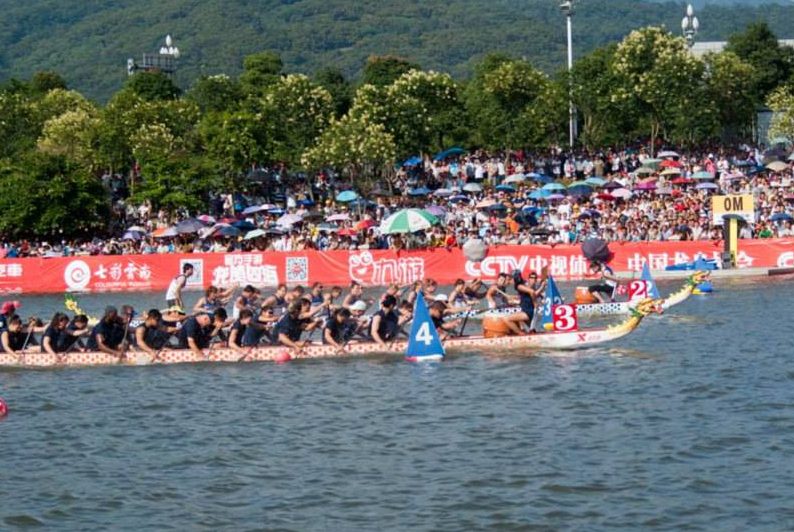 “There is a lot of technique to it, and getting 20 people to all paddle at the same time is a big challenge,” says Schlimmer, who also participated in the International Dragon Boat Federation World Cup in Fuzhou, China, and the Hong Kong IDBF regatta preliminary races, both in 2014. “It was definitely something new for me to learn.”

Schlimmer was first introduced to dragon boat racing in 2014 when the coach of Team USA, Bob McNamara, who also coaches the Philadelphia Dragon Boat Association, contacted him about trying out for the team. McNamara had noticed Schlimmer’s times in various canoeing and kayaking races, such as the “triple crown of canoe racing,” a trio of events held in New York, Michigan and Quebec.

Schlimmer didn’t hesitate. He competed in a time trial for Team USA, was selected, trained in Philadelphia with the team on weekends and headed to China. Two of his six siblings, Michael and Mary, who are also watersport competitors, were also selected.

The International Dragon Boat Federation, which governs the rules and regulations, including the boat size and paddle form, holds the World Cup in various countries.

The first time Schlimmer launched with his team in a race was “awe-inspiring,” Schlimmer says. “There were a lot of good athletes in the boat, and I felt really honored to be there.” 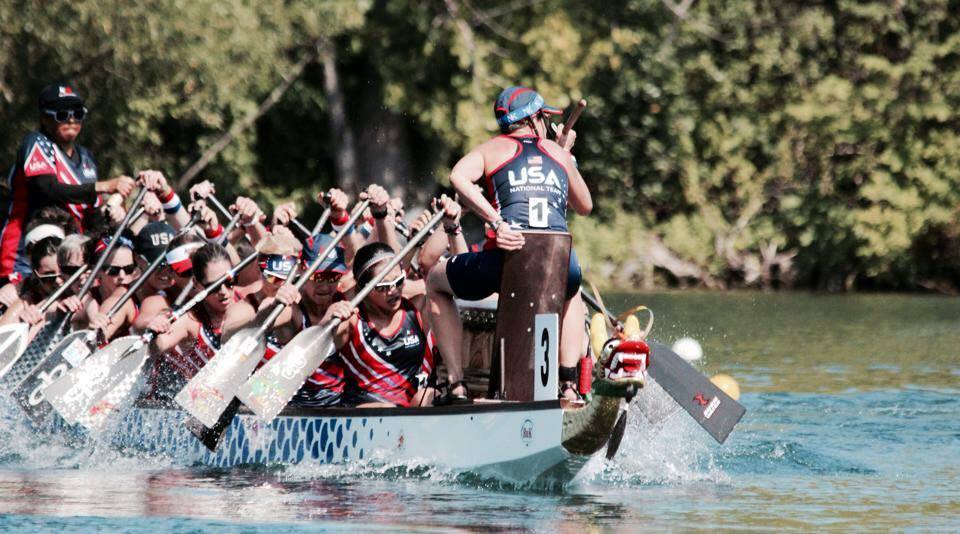 The competitions include various race lengths and preliminary heats, ranging from 500 meters to two kilometers, with competitors from China, Taipei, the Philippines, Canada, German and Australia, among other countries.

“In those seconds leading up to when the pistol fires off, your heart rate is going, and you can feel the adrenaline pumping through your body in anticipation of the competition,” Schlimmer says. “There’s a lot of people cheering and screaming.”

During the race, the steersman is responsible for keeping the boat straight, calling out strategic moves and indicating the location of other boats. “The drummer keeps the beat of the paddling,” Schlimmer says. “It’s like a symphony. You have to paddle in unison.”

In 2014, Team USA took the podium for several medals, including a gold medal in the 500-meter race in Hong Kong and a silver in the 1K in Fuzhou.

This year, as in 2014, Schlimmer was once again invited to try out for the team and is heading out to Thailand on Aug. 16. His sister, Mary, along with two brothers, Michael and Joseph Jr., are also on the team. 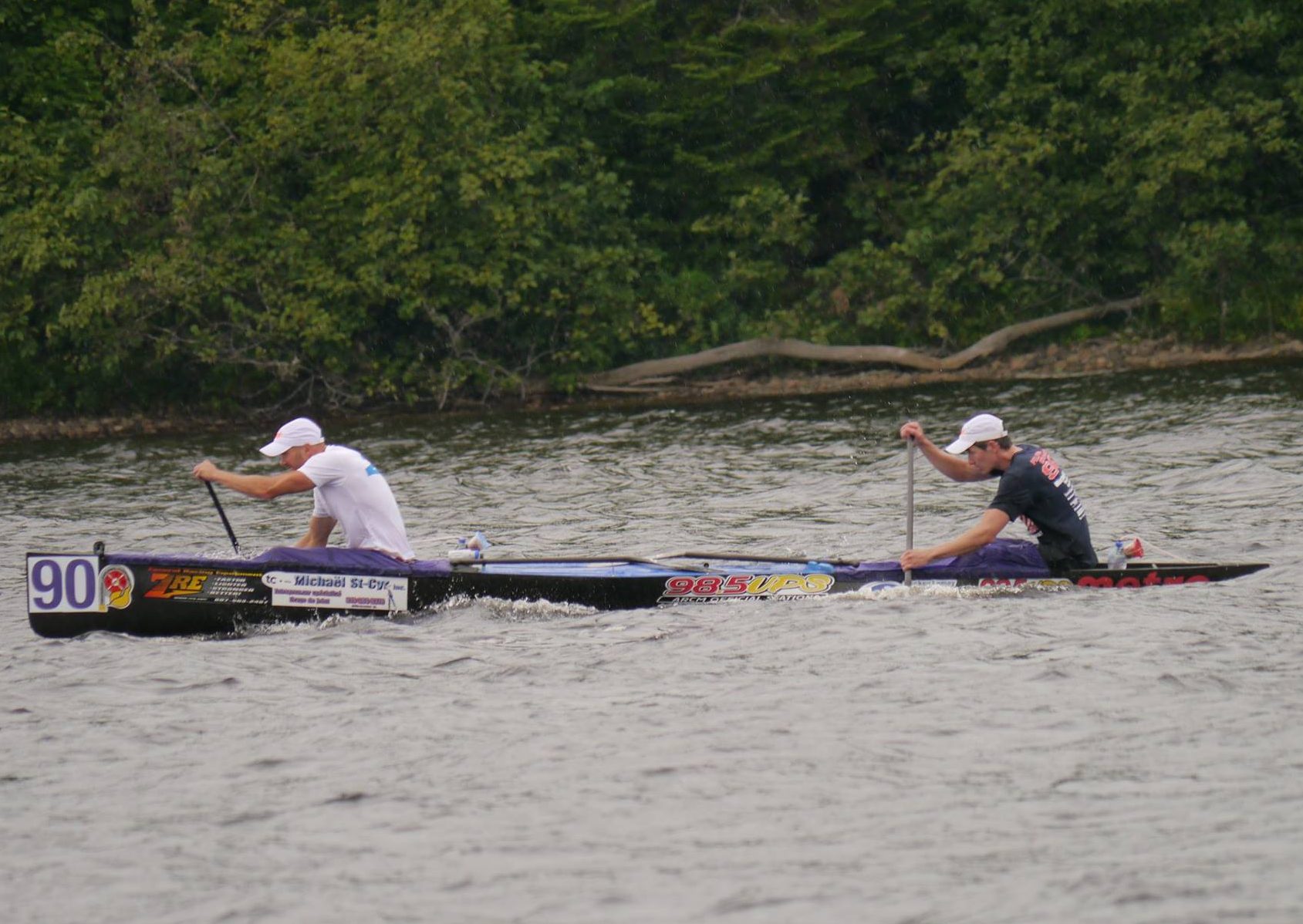 “It makes it a family affair and a great bonding experience. I’ve been racing with my siblings for quite a few years,” he says.

Schlimmer continues to compete in various races, including the triple crown, and has even participated in longer marathon canoeing events, such as a 1,000-mile adventure down the Yukon River.

“I’ve been doing canoeing competitions for the last 10 years,” he says. “When I was a senior in high school, my dad took me out for my first canoe race. I competed and got hooked, and the rest is history.”

Schlimmer’s father is from Fayetteville, New York; his grandfather was a scoutmaster who would lead canoeing expeditions on nearby creeks. “My dad grew up paddling and he passed that on to us,” he says.

Schlimmer says his parents, Joseph and Tracy, are proud of their paddling crew. 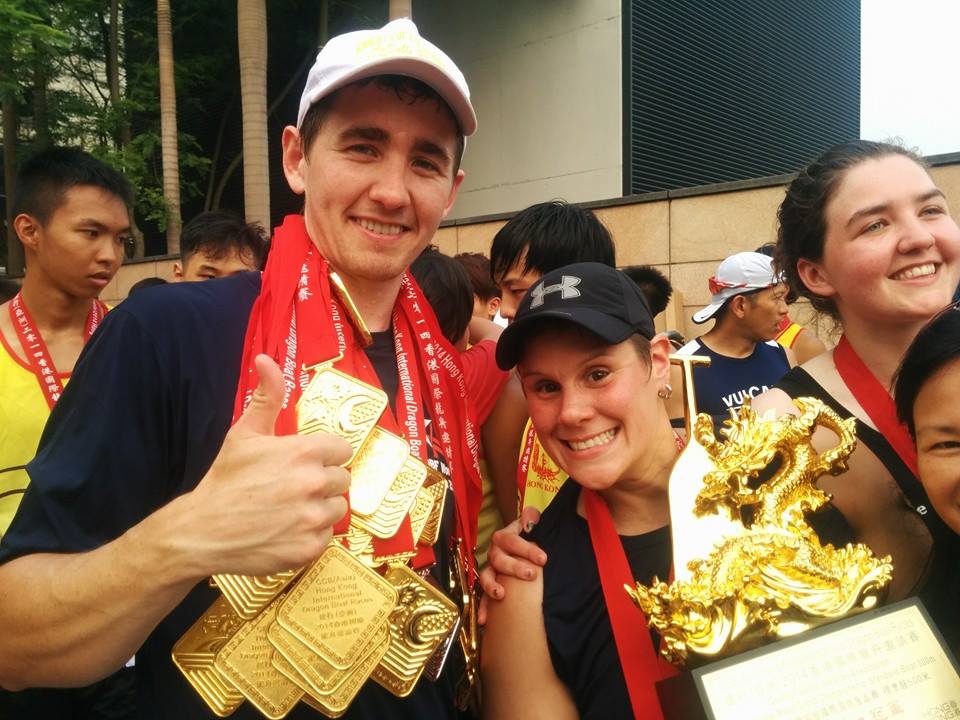 Ben Schlimmer, left, and his sister, Mary, display their team’s many medals following the medal ceremony for the 500-meter mixed category race at the Hong Kong preliminary World Cup races in 2014.

“My dad especially, the paddling gene came from his side of family, and he lives vicariously through us,” he says. “When he was younger, he did much of what we are doing now, competing in the triple crown. Now it’s a third generation, and we’ve taken it to a new level.”

Schlimmer enjoys the competition, but it’s also about being in nature.

“It is invigorating to be on the water, and there is a tranquility to it as well,” Schlimmer says. “Canoeing takes you places you normally would never be able to go, unless you’re in a motor boat or flying.”

As he prepares for Thailand, he’s looking forward to meeting up with friends from the competition in 2014, winning some medals and battling with his team together.

“You’re all bonding together with this common goal,” Schlimmer says. “And unexpected things can happen. I remember one time our boat almost got swamped because we went through this big wave.”

The competition will be streamed online at the IDBF website, and Schlimmer will be blogging during the trip on the website canoeraceworld.com.

The competition is televised in Asia—it’s a popular sport there and growing worldwide.

“The energy of the race really comes through with so many competing in the boat. It’s fun to watch because it takes so much team work to stay in sync,” Schlimmer says. “There’s also a history and culture behind it that makes it special.” 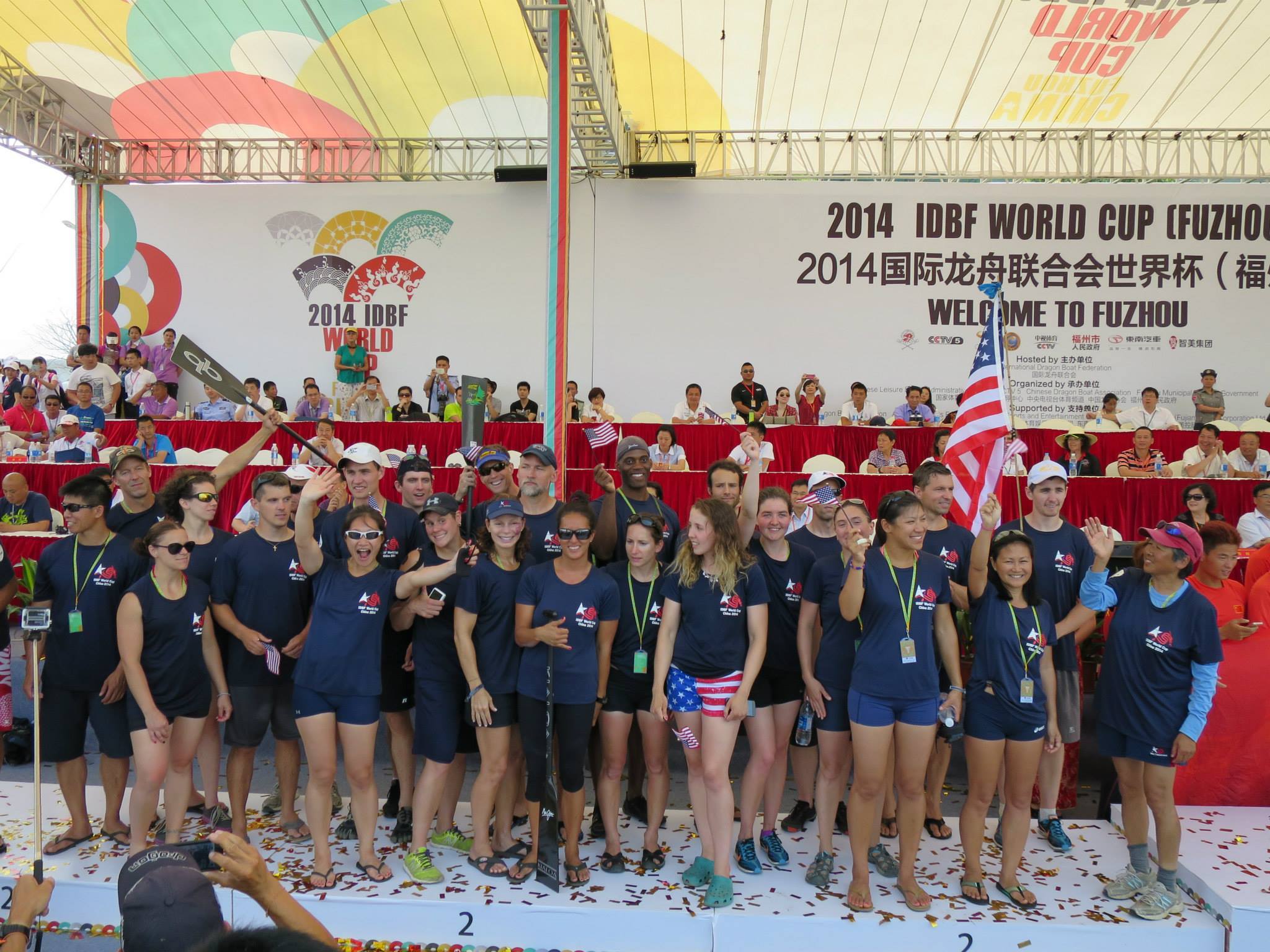