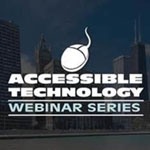 The Southeast ADA Center, a project of the Burton Blatt Institute at Syracuse University (BBI), is co-hosting the free Accessible Technology Webinar Series. The next webinar, “(Dis)abling Comics, ‘Cripping’ the Comic Con, and Accessible Technologies,” is Thursday, July 18, from 2 to 3:30 p.m. with guest speaker Diane R. Wiener, research professor and associate director of interdisciplinary programs and outreach at BBI.

Wiener will discuss disability arts and culture, and their implications, as underscored by:

She will also discuss (Dis)abling Comic Books, an Honors seminar taught at Syracuse University inspired by and based upon the disability-themed “Cripping” the Comic Con (“Crip Con,” for short), the only international, interdisciplinary symposium of its kind. This past spring, the course was offered for the fourth time and the sixth “Crip Con” was coordinated by Wiener with myriad University and community partners.

The webinar series is funded by a grant from the National Institute on Disability, Independent Living and Rehabilitation Research. Co-hosts include the Pacific ADA Center, the Great Lakes ADA Center and the ADA National Network.

Captioning will be provided for the webinar. For registration and more information, visit the Accessible Technology Webinar Series website.