London-based students, faculty, staff and alumni are invited to a showcase of Restoration Shakespeare at the historic Globe Theatre, co-led by Amanda Eubanks Winkler, associate professor of music history and cultures in the College of Arts and Sciences (A&S).

The event is Wednesday, July 17, from 4-6 p.m. (British Summer Time) at the Wanamaker Playhouse, Shakespeare’s Globe (21 New Globe Walk, London). Free and open to the public, the program includes live performances of music and scenes from late 17th-century, Restoration-era adaptations of Shakespeare’s “The Tempest” and “Macbeth.” Tickets are free, but must be pre-booked through Eventbrite: eventbrite.co.uk/e/performing-restoration-shakespeare-showcase-tickets-63111704808.

The showcase is part of “Performing Restoration Shakespeare,” a multinational, interdisciplinary project sponsored by the Arts and Humanities Research Council in the United Kingdom.

In addition to the performances, the duo will facilitate a discussion with Will Tosh, lecturer and research fellow at Shakespeare’s Globe; Robert Richmond, stage director of the acclaimed 2018 production of “Macbeth” at the Folger Theatre in Washington, D.C. (funded in part by “Performing Restoration Shakespeare”); and Bob Eisenstein, “Macbeth”’s music director.

The performers are Kate Eastwood Norris, who portrayed Lady Macbeth in the Folger production of “Macbeth”; Emily Barber, who played Ariel in a recent workshop on “The Tempest” at Shakespeare’s Globe; and Dominic Brewer, who was Ferdinand in the “Tempest” workshop version.

“You’ll get a behind-the-scenes look at our production of the Restoration ‘Macbeth,” Eubanks Winkler says. “You also will gain insight into the benefit of embedding scholars into the entire rehearsal and creative process, as well as the value of performing these works today.” 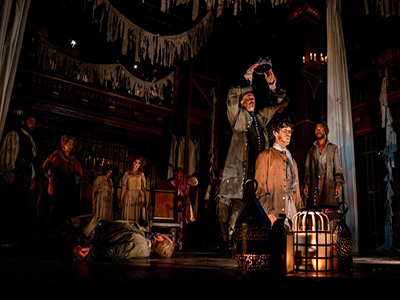 A scene from the acclaimed 2018 production of “Macbeth” at the Folger Theatre in Washington, D.C.

One of Eubanks Winkler’s goals with the project is to use multimedia and digital distribution to engage with a broad audience. “We’re creating an online repository of video documentaries about our project, so that others may be inspired to perform these compelling adaptations. We also discuss best practices for fostering scholar-performer collaboration,” she adds.

“Restoration Shakespeare” refers to adaptations of the Bard’s plays that were performed from 1660-1714, amid the restoration of the English monarchy.

“When theaters reopened after the English civil war, few new plays were available. As a result, theater companies presented Shakespeare in new, exciting ways,” says Eubanks Winkler, a scholar of 17th- and 18th-century English music and drama. “These extravagant adaptations were popular then, and still are today. Our performances of ‘The Tempest’ at the Globe and ‘Macbeth’ [at the Folger] have attracted wide press coverage and sold-out audiences.”

“Wordgathering: A Journal of Disability Poetry and Literature” Spring 2021 issue is now live via “Wordgathering’s” website. The 57th issue of this quarterly digital, open access journal is made possible by generous support from Syracuse University’s Office of Interdisciplinary Programs…

If a quality of a good play is to be both timely and timeless, then “I and You,” the next play in the reimagined 2020/2021 Syracuse Stage season, succeeds admirably. It is a play that seems to directly address the…

The pandemic caused events around the globe to be canceled, from concerts to fairs. With vaccines becoming widely available, some events are coming back—although in altered ways or with limited capacity. Here are a few of Central New York’s most…

Lorenza D’Angelo, a graduate student from the Department of Philosophy in the College of Arts and Sciences, was selected as the 2021 winner of the prestigious Mary Hatch Marshall Essay Award for her piece titled “Emotional Experience and the Senses.”…

“Exhibition Interrupted,” a display of work designed by School of Architecture Professor Anne Munly, will open Tuesday, April 27 in the Slocum Hall Marble Room and online. Munly is retiring at the end of the spring 2021 semester following more…