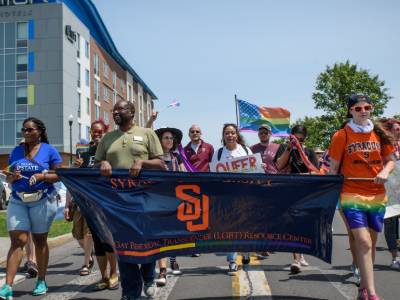 kemp-delisser (center left) marched with 30 other higher education representatives on Saturday, June 22 at the CNY Pride Festival and Parade. Photo by Matt Spitzmueller

On Saturday, June 22, CNY Pride hosted its annual CNY Pride Festival and Parade in the Syracuse Inner Harbor. As part of the parade, khristian kemp-delisser ’01, director of the Lesbian, Gay, Bisexual and Transgender (LGBT) Resource Center on campus, helped organize a group of higher education professionals in the CNY area to march.

“In the early days of the CNY Pride parade, some educators actually could not risk being visible members of the LGBTQ community. Some people marched with paper bags over their heads,” says kemp-delisser.

“It’s heartwarming to be able to represent the higher education community in the parade,” says kemp-delisser. “We want the whole Syracuse community to see and share the Pride we each try to foster on our campuses.” 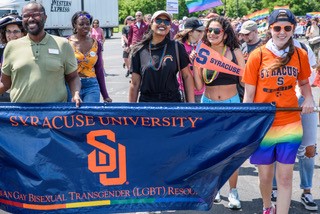 This year’s CNY Pride Parade and Festival had a record number of attendees, doubling in size from last year’s event. Photo by Matt Spitzmueller

Fifty years ago, the Stonewall Uprisings became a key turning point in the LGBT rights movement. Before Stonewall and still today, the queer community fights for human rights through activism, and Pride Festivals since Stonewall have been an annual opportunity to do so. While fighting for equal rights, Pride offers a space to celebrate the queer community.