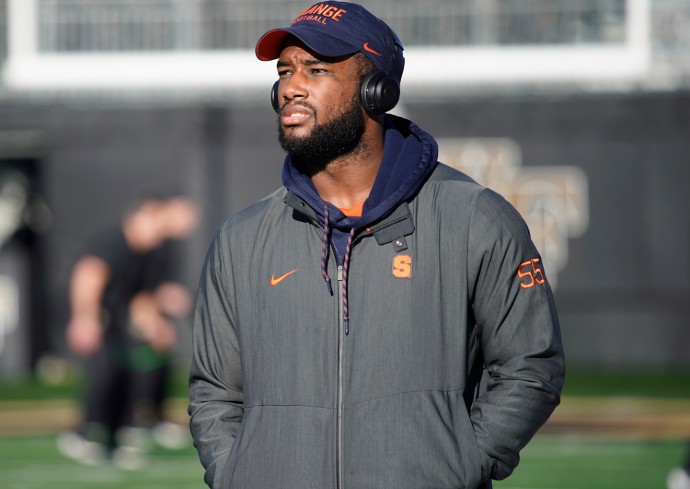 Those hands. Meet senior Kendall Coleman, and they are hard to ignore—thick, muscular wrists, fleshy palms and slender fingers that exude confidence. Authority.

They are hands that have mercilessly attacked hundreds of football jerseys, including that of West Virginia quarterback Jack Allison, whom Coleman sacked three times in the 2018 Camping World Bowl, tying the Syracuse bowl record.

They are hands that clenched in agony in 2017, when Coleman tore his left labrum against Louisville, causing him to consider giving up playing.

They are hands that dance their way across Coleman’s keyboard, whether working on a research paper for Falk College or stringing together lines of poetry for his own enjoyment.

They are hands that tell stories.

“Inspiration can strike anywhere,” says the 6’3”, 252-pound defensive end and poet. “One time I got off the bus near Crouse College, as the sun was setting. The sky was beautiful, with lots of purples, pinks and blues. I had to take a picture, so I could write about what I saw.”

For all his success on the field, Coleman wrestles with his creativity in other ways. Since arriving at Syracuse in 2016, he has written scores of poems about all matter of subjects—love, loss, coming of age, the circle of life and the simplicity of beauty.

In keeping with his mobile persona, Coleman uses an app to write and store his work. “It’s nice because I don’t have to scroll as much. I also can call up music and photos on my phone for inspiration,” says the three-year letterwinner, giving his iPhone a perfunctory swipe.

During a meeting on South Campus, Coleman reveals how writing poetry helps him absorb scenes and navigate emotions. It also helps him unwind from a long day, which usually begins at 6 a.m. and includes morning conditioning sessions, followed by an internship in the Manley Field House weight room.

Whether analyzing an opposing offense or the 5-7-5 structure of a haiku, Coleman relies on instinct. Such proficiency has made him an intrepid pass rusher, teaming with senior Alton Robinson to form the No. 1 sack duo in the ACC, with 20 combined quarterback takedowns last season.

Coleman’s sixth sense also translates into the classroom, where he hopes to parlay his training in human development and family science into a career in coaching or athletic advising.

“Everything I do has a little bit of heart and a little bit of gut,” says Coleman, who also is eyeing the 2020 NFL Combine in his hometown of Indianapolis. “You can’t exactly teach intuition, but you can do things to improve it—from studying the stances of your opponent; to listening to your body, if it’s tired or injured; to experimenting with different rhythms and meters in writing.”

It took Coleman time to find his creative muse. Years, in fact. He traces his interest in poetry to a seventh-grade assignment, in which he had to write about a poet of his liking. Coleman initially chose rapper Common, but his mother, Nikki Coleman, disapproved.

“In those days, I didn’t think rappers were poets, nor did I think Common represented our family’s values,” recalls Nikki, speaking by phone from Indianapolis, where she is a pharmacist for Eli Lilly and Co. “My perspective has changed considerably since then.”

Fitting, if not prophetic, that she introduced Coleman to the jazz-tinged poetry of Langston Hughes—notably, his 1922 chestnut “Mother to Son.”

Nikki recites the opening lines, as if she were reading them to Kendall for the first time:

Well, Son, I’ll tell you:
Life for me ain’t been no crystal stair.
It’s had tacks in it,
And splinters,
And boards torn up,
And places with no carpet on the floor—
Bare.

“I didn’t realize the impact that poem would have on Kendall. I think it gave him insight into parenting, as well as got him hooked on poetry,” says Nikki, who gave Kendall a volume of Hughes’ poetry for his 21st birthday in April.

Coleman pauses at the mention of “Mother to Son,” admitting the work struck him at a “core level.” He says it also showed him how music transforms into poetic verse.

“‘Rap’ actually is an acronym for ‘rhythm and poetry,’” explains Coleman, adding that modern-day rappers, such as J. Cole and Kendrick Lamar, are continuing what Hughes started. “I don’t think I’m talented enough to be a musician, but I do like to add my own lyrics to other people’s grooves.”

Coleman penned his first poem during his senior year of high school. Tasked with writing a term paper or creating a piece of art, he went rogue, insisting that a two-page original poem was “just as artistic” as a painting, photograph or piece of sculpture. “His father, sister and I were surprised by what he wrote,” recalls Nikki, who was a published poet in high school. “We didn’t know Kendall had it in him.”

Nor did his classmates, who began pestering him for poems. 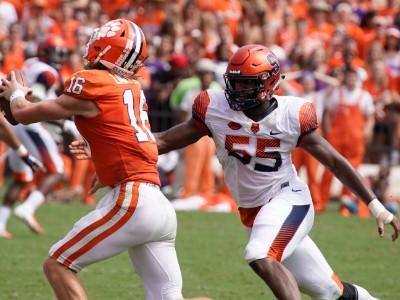 Kendall Coleman in action against Clemson.

Coleman continued writing at Syracuse, while skyrocketing to gridiron success. (In 2016, he was the Orange’s first true freshman to start a season opener at defensive end in nearly 20 years.) Credit teammate Hernz Laguerre ’16 for giving Coleman his literary break. “One day, Hernz told me to show up at this place at two in the afternoon and to bring my résumé and a couple of poems,” Coleman remembers. “I hadn’t composed anything in a while, so I stepped outside and began writing about a tree I saw on campus.” The result was a tender ballad about Coleman’s friend Leah, whose name is Greek for “lemon tree.”

Turns out Laguerre was doing a favor for a friend, whose sorority needed contestants for a charity pageant. “I was nervous because I had never read my poems in public before, but it went OK,” Coleman says. “Someone came up to me afterward and said my writing reminded them of J. Cole’s. Talk about the ultimate compliment.”

Months later, Coleman shared his poetry at Remembrance Week 2017, honoring the memory of the 35 Syracuse students killed on Pan Am Flight 103. He was inspired to write an eight-line tribute, after a Remembrance Scholar visited one of his classes. “I was kind of blown away,” former teammate Cameron MacPherson ’16, G’18 told The Daily Orange, after witnessing Coleman’s performance.

Coleman recalls the 2017 season with mixed emotions, as injuries took their toll on him. Days after tearing his labrum, he informed his parents he was quitting the team. They issued an ultimatum: Stay at Syracuse and play football, or come home and enroll in community college. “Giving up was not an option,” Nikki says.

Although the path to recovery was “long and hard,” the experience made him a well-rounded player. “Being sidelined gave me a different perspective of the game. I began to see it through the eyes of a D-line [defensive line] coach,” says Coleman, who also became obsessed with health and fitness. He currently is interning under the watchful eye of Corey Parker, assistant athletics director for Olympic sport strength and conditioning.

Coleman says rehab forced him to slow down—to become more observant and keenly aware. As a result, poetry began spilling out of him, as if emanating from some divine or supernatural source. Ideas that used to take days to develop came together in a matter of hours or minutes. Impressive, considering Coleman has never taken a creative writing class or attended a poetry workshop.

Nikki thinks rehab helped Kendall “connect the dots” on multiple levels—as a poet, a student-athlete and a person. “There’s a lot of unconscious bias about African American football players—that they’re big, scary or dumb. People are surprised to find out that Kendall really is a teddy bear. He loves to cook and make origami. His faith is very strong,” she says, noting his longtime involvement with the Fellowship of Christian Athletes.

Coleman says he will need plenty of faith to surpass last year’s personal best, which included 32 tackles (23 solo), 12 of which were for a loss. He also led the ACC in sacks per game (0.83) and tied for second in the conference with 10 sacks. Until then, he is riding the “wave of excitement” of summer training. “From top to bottom, this is the most athletic team I’ve ever played on at Syracuse. Competition is high, our work ethic is strong, and everybody wants to win,” he grins, extending his hand for a final, well-executed handshake. “Now that’s something to write about.”

Mind of the Rich
By Kendall Coleman ’20

If it doesn’t make money, it doesn’t make sense.
Help the poor? What for? They’re not tryna help me stay rich.
Give them a sweepstake instead and let them play rich.
Let them see and feel this lifestyle, but never let them get a grip.
Knowledge and hope are their biggest weapons.
Man, I pray for my sake they never become equipped.