75 Years of the GI Bill: Kyle Finleon Shares His Story 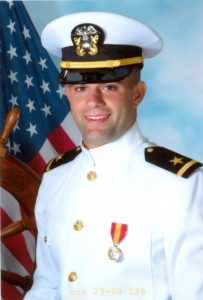 Since its signing in 1944, the GI Bill has provided educational benefits to the country’s veterans and offered low-cost home loans, unemployment benefits and health care benefits.

To accommodate the numbers of eager new college students, more housing and classrooms sprang up around campus and new academic programs were developed. Veterans brought about a change to campus student life and challenged the University’s traditions, testing and transforming the University through the GI Bill.

Over the past 75 years across the country, the bill has paid more than $400 billion in educational benefits to 25 million recipients and authorized more than 24 million home loans—changing the post-service lives of millions. And the tradition of welcoming veterans continues at Syracuse University. U.S. Navy Lt. Kyle Finleon G’15 is one example.

In 2005, following the bombings in London, Finleon was inspired to military service.

“I happened to be doing an internship in London that summer and left just two days before the bombings,” says Finleon. “It was pretty eye opening to say the least. That was the first time I realized I wanted to serve.”

He graduated from Hardin-Simmons University in Abilene, Texas, in 2006 with a major in marketing and a bachelor’s degree in business administration.He went to work for Applied Materials for two years. He then decided to join the Navy and trained to become a surface warfare officer (SWO). During his time as an SWO, he saw deployments to both Africa and South America aboard the USS Samuel B. Roberts, where he conducted anti-piracy and anti-drug operations.

After his time in the Navy, Finleon returned to the semiconductor industry. With the GI Bill at his disposal, he knew a master’s degree in business administration would further his career. He had his sights set on a large, reputable business school, which led him to Syracuse University. Pleased with the veteran-friendly atmosphere and flexibility within the program, Finleon began an MBA program in August 2012. In 2015, he graduated with an MBA from the Whitman School and heralded his time and experience with both the University and the U.S. Department of Veterans Affairs (VA), which administers the GI Bill.

“I was very pleased with the ease at which Syracuse, as well as the VA, made it to coordinate the use of the GI Bill and the support Syracuse gave me in that process,” Finleon says. “The GI Bill is what makes America special. It is America’s way of saying thank you to our service members by giving them the tools needed to succeed.”

For more information about the GI Bill and its history at Syracuse University, view this video compiled several years ago with interviews from alumni veterans and historic clips of campus life.

OVMA Announces Over $15K in Spring Scholarships for Military-Connected Students