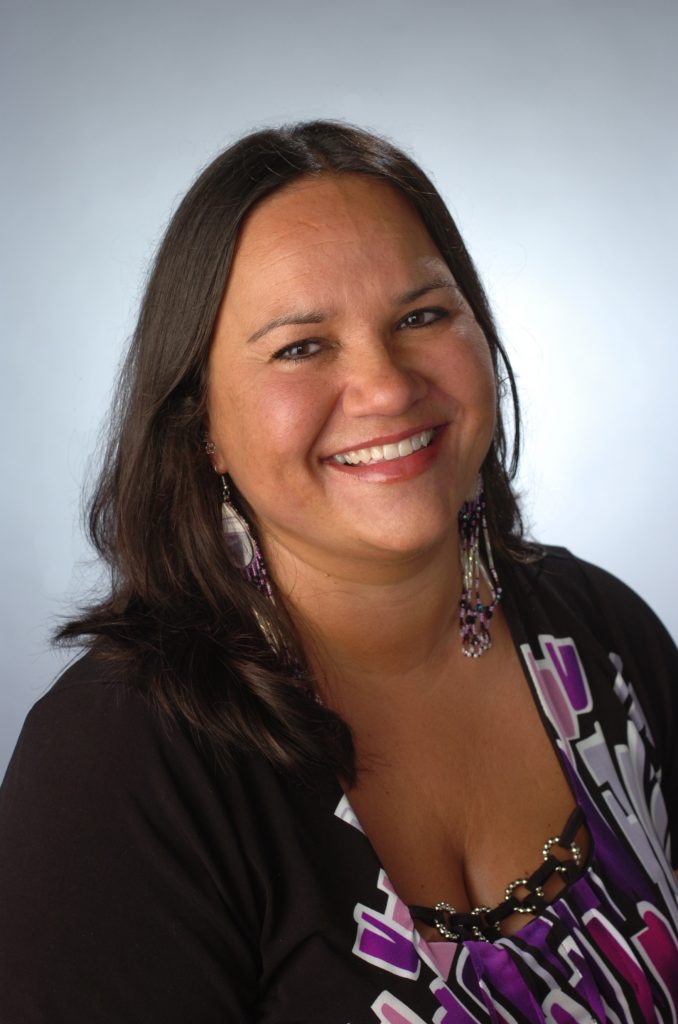 During the annual Native American student orientation in the fall or the Indigenous Student Graduation Reception around Commencement, you’ll probably see Tammy Bluewolf-Kennedy with her camera or cell phone at the ready.

Bluewolf-Kennedy ’04, G’10, admissions counselor and Native American liaison in the Office of Admissions, attends as many of the Native student events, presentations and gatherings as she can during the academic year.

“The students will tell you I’m the one running around taking pictures of everyone,” Bluewolf-Kennedy says. She laughingly agrees, but she has a purpose.

Like a proud mom or family member, Bluewolf-Kennedy sees greatness in the students—and she wants them to see it in themselves. She wants students to know: “You have done fabulous things, and everyone needs to see this.”

With a special focus on recruiting indigenous students to the University, Bluewolf-Kennedy, who has been with the Office of Admissions for almost nine years, travels the country and Canada meeting with students at high schools and college fairs.

In New York state, Bluewolf-Kennedy recruits Native American students who may be eligible for the Haudenosaunee Promise Scholarship and the Haudenosaunee Honor Scholarship. The University-sponsored scholarships provide financial assistance to citizens of one of the historic Haudenosaunee nations (Mohawk, Oneida, Onondaga, Cayuga, Seneca or Tuscarora). 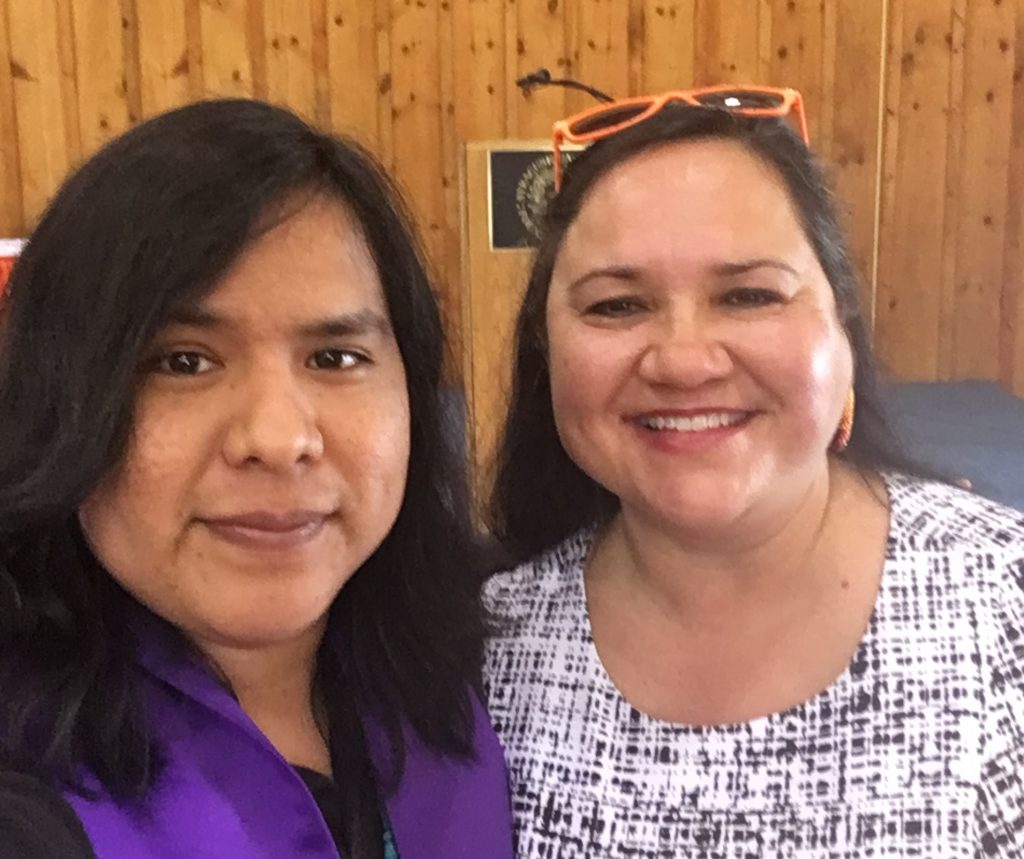 Out west, she attends such events as the Choctow Nation’s Ivy League college fair in Durant, Oklahoma, and the annual Native American Gathering of Nations in Albuquerque, New Mexico, where she visits high schools in Albuquerque, Sante Fe and Farmington. She also heads to schools in Tulsa and Oklahoma City, Oklahoma, and recently the Southern Ute reservation in Durango, Colorado.

In admissions recruiting, it may take three to five years to build recognition for a university in an area before students start applying, she says. “But when we’re recruiting indigenous students, it may take six to eight years before you really see applications start to come in.”

Bluewolf-Kennedy explains there are many historical and political issues involving U.S. policies toward Native Americans over the past centuries that have led to indigenous people being distrustful of the U.S. educational system.

“There’s also this legitimate fear that if families send their kids away to school, are they going to come back or go somewhere else. I can understand that,” says Bluewolf-Kennedy, who is a member of the Wolf Clan of the Oneida Indian Nation, in Oneida, New York.

“When we provide educational and research opportunities to indigenous students, we’re helping not only that student but that family and that community and that nation. We’re creating a generation of indigenous scholars who are going to go home to their territories where they will become leaders—and that’s nation building,” she says. “It’s one of the reasons why I love being in this job.” 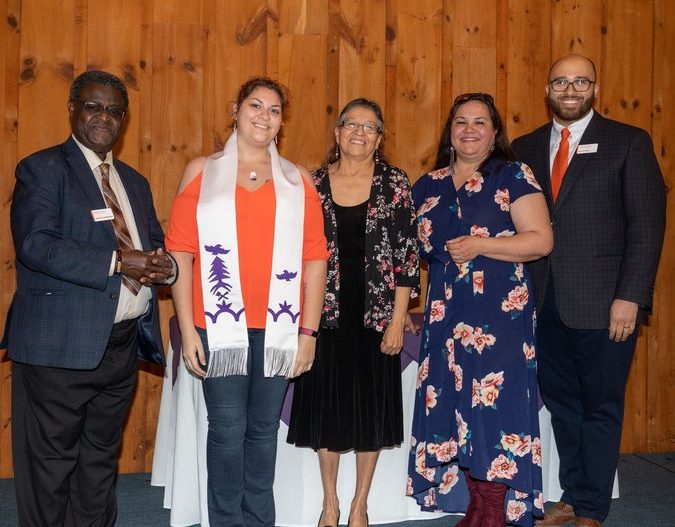 When she meets with students and their families, Bluewolf-Kennedy informs them about the University’s people and supports available for indigenous students, including the Native Student Program, with Regina Jones and Jerrel Burgo, as part of the Office of Multicultural Affairs; the student-run Indigenous Students at Syracuse organization; the Indigenous Living Learning Community and mentoring programs, along with other programs.

The community of support has been built at Syracuse University because of its intentional work to be a welcoming place for all. There are almost 300 self-identifying indigenous students on campus; over 80 are citizens of the Haudenosaunee confederacy.

“We are an institution that proactively works on building a campus community that is diverse and inclusive—and that looks to support all of our students,” says Bluewolf-Kennedy, who is a member of the Universitywide Council on Diversity and Inclusion. “It is a university that understands its history as being on Onondaga Nation land and supports its indigenous population.” The University has a policy of opening public events with an acknowledgement of the Onondaga Nation, the indigenous peoples on whose ancestral lands Syracuse University now stands, and flying the Haudenosaunee flag in prominent campus locations.

Bluewolf-Kennedy, who also has a contingent of Native American alumni representatives who help her spread the word about what Syracuse University has to offer, speaks to prospective students from her own welcoming experience as a student.

Before her time at the University, she had worked in the Oneida Indian Nation’s education department. She initially enrolled in the School of Information Studies to pursue library science and assist the Nation in establishing its library, but realized it wasn’t the right fit. She switched to English and textual studies in the College of Arts and Sciences and found her place.

“I worked with some brilliant professors, and they were very supportive,” Bluewolf-Kennedy says. With her focus on indigenous studies, she would use whatever literary theory her classes were studying at the time and apply it to an indigenous issue.

After she earned a bachelor’s degree, her professors, such as Philip Arnold, Scott Lyons and Monika Wadman, encouraged her to pursue a master’s degree. “I was ready to be done and be a mom—I have seven children at home,” says Bluewolf-Kennedy, whose children now range in age from 11 to 34. “But my professors were like, ‘you can do this.’”

Bluewolf-Kennedy was accepted into the master’s program in English, continuing to frame her studies to fit her interests.

“This is the kind of thing I hammer home to students,” she says. “Regardless of your program, you’re going to have that support to direct your studies and research to the things that you are passionate about.”

After she finished her degree, one of her professors, Richard Loder, sent her an email about the new Native American liaison position in the Office of Admissions and she applied. It is a role she cherishes.

“I love connecting with indigenous students and letting them know the opportunities available to them,” Bluewolf-Kennedy says. “We’re helping them discover their abilities and develop their critical thinking skills and passions so they can go back to their communities and help renew, rebuild and fortify them. It’s a privilege for me to help them get to that point and make their mark in the world.” 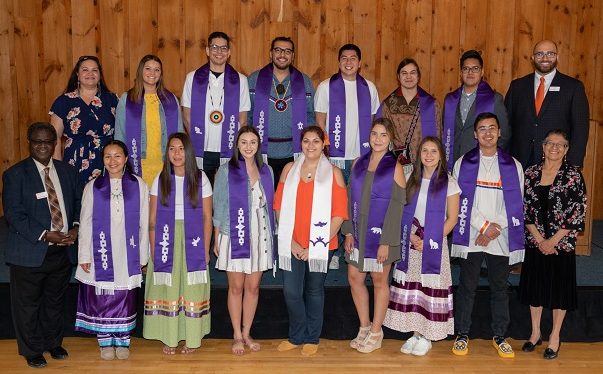 Indigenous Student Graduation Reception in May