A total of 230 women veterans and military spouses attended the Veteran Women Igniting the Spirit of Entrepreneurship Atlanta program.

This past weekend, a record 230 women veterans and military spouses descended on Atlanta to take part in Syracuse University’s Veteran Women Igniting the Spirit of Entrepreneurship (V-WISE) program.

Developed by the Institute for Veterans and Military Families (IVMF), the V-WISE program provides education, supportive services and resources to women veterans and female military spouses who aspire to launch and grow their own small business. V-WISE Atlanta was the 21st program, delivered twice a year in cities across the United States. To date, more than 3,000 women have received cost-free business ownership training through the V-WISE program, and 90 percent go on to launch a new business after completing the training.

A tradition at each V-WISE program is to honor and recognize the accomplishments of two women who represent exemplars for all those in attendance, and Atlanta was no exception. During the kick-off dinner launching three days of intense training and networking, the women of V-WISE Atlanta honored Kathy Walters ’73 and Lynne Pace as V-WISE “Trailbreakers.” 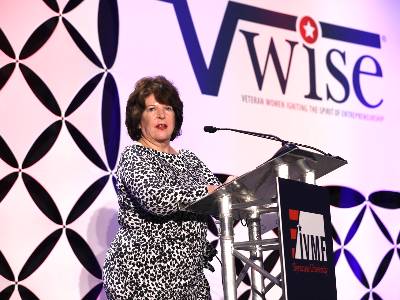 Syracuse University Board of Trustees Chair Kathleen Walters ’73 speaking at the V-WISE conference in Atlanta.

Walters, the recently retired head of consumer products at Georgia-Pacific and the first woman to serve as chair of Syracuse University’s Board of Trustees, spoke to the participants about courage. “You are looking for a new beginning in your professional lives,” Walters said. “You may feel as though this is a drastic change but in fact you already have the most important ability it takes to succeed as an entrepreneur—courage. I learned in my professional life about the power of just taking the first step.”

Pace, the wife of retired U.S. Marine Corps General and former Chairman of the Joint Chiefs of Staff Peter Pace, remarked: “It has been an honor and a privilege to support military families over all these years. I often refer to my military families as ducks on my pond. And I’ve truly enjoyed doing my small part to care for them while their loved ones protect our nation. Your determination and desire to provide for your families is inspiring.” Pace’s husband attended to celebrate her recognition as a V-WISE Trailbreaker.

The V-WISE participants benefited from more than 30 training sessions and four keynote speakers. They were able to take away lessons from the experiences of the more than 30 educators, instructors and successful entrepreneurs who traveled to Atlanta to teach, train and empower these future entrepreneurs.

“I feel like I haven’t had a voice for 36 years. V-Wise gave me that voice,” said Melody LeGrant, military spouse and V-Wise participant. “When my husband, Andre, was serving, my family had to come first. Now it is my time. I’m ready to soak in all this opportunity.”

Attendees also had the opportunity to showcase their businesses; practice and receive feedback on pitching their venture to potential partners, lenders and investors; and engage successful entrepreneurs in discussions related to the obstacles and challenges associated with business ownership.

“Military spouses and women veterans are uniquely positioned to succeed as entrepreneurs,” said Mike Haynie, Syracuse University vice chancellor for strategic initiatives and innovation and founder/director of the IVMF. “Their resilience, passion and perseverance is unmatched, and those in attendance in Atlanta were certainly no exception. It is an honor to be part of their journey and support them as they work to create, through business ownership, their own version of the American dream.”

V-WISE is part of the IVMF’s ARSENAL initiative, a suite of eight national entrepreneurship programs, offered to veterans, service members and their families through the institute. The IVMF also manages programs in career preparation and community support, as well as critical qualitative and quantitative research for the University and industry-leading organizations.