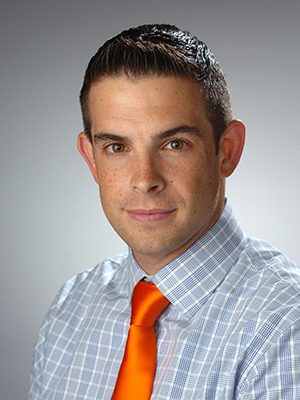 Karin Ruhlandt, dean of the College of Arts and Sciences (A&S), announced that she has promoted Christopher Noble Anderson G’15 to director of graduate and undergraduate recruitment.

Previously associate director of undergraduate recruitment, he succeeds Denny Nicholson, who is the University’s new assistant dean of admissions.

“Chris is a passionate proponent of the liberal arts and of how they can help students forge their own path to a rich and successful life,” Ruhlandt says. “His vision, professionalism and drive will ensure A&S and Maxwell maintain a diverse, academically strong and intellectually curious student body.”

In his new capacity, Anderson will implement a comprehensive recruitment plan to meet enrollment targets for more than 50 undergraduate degree programs in A&S and Maxwell. He will represent both units at local, regional, national and international recruiting functions, as well as support central enrollment management planning and execution.

“Students have a wide variety of graduate programs from which to choose, making A&S more desirable and competitive than ever,” says Anderson, who joined the College in 2007, after two years in central admissions.

His personalized approach to recruitment owes to the belief that applicants are students, not statistics.

“A&S and Maxwell want students who thrive in a liberal arts environment—ones who make a difference on campus and engage with the community. My job is to make sure we’re a good fit for students, and they’re a good fit for us,” he says.

Anderson’s efforts over the past decade have helped increase the selectivity of both units’ undergraduate programs.

This year, A&S and Maxwell have received more than 15,000 applications, nearly double from 2009, with over one-third of the pool coming from students of color. Of those, the average admitted student GPA and SAT score are 3.7 and 1315, respectively. “I hope to preserve the positive momentum we have attained in our recruitment efforts, quantitatively, and qualitatively,” he says.

Anderson estimates that at Syracuse, he has reviewed nearly 11,000 applications, conducted more than a thousand college interviews and organized over 230 recruiting events on-campus and in the field.

He also has used social media to help drive enrollment in new markets, such as China, and has co-founded the Dean’s Team, an elite group of A&S undergraduates that assists Ruhlandt with various admissions activities throughout the year.

“I am excited to build on the success of my predecessors—strengthening partnerships and relationships between A&S and Maxwell, and demonstrating a commitment to diversity and inclusion,” he says.

Anderson resides in Brewerton, New York, with his wife, Michele, and their daughters Grace and Mary. Before joining the University, he held various positions at the Syracuse City School District, CXtec and the New Jersey Nets.