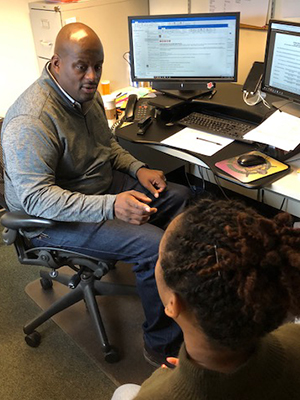 Scott Freeney ’97 working with a student.

Hannah, a first-year student in the College of Arts and Sciences (A&S), can’t decide on a major.

Sitting across from her advisor in a cozy, book-lined office in the Hall of Languages, the 19-year-old admits she’s at a crossroads. “I’m good at science, but I’ve been writing poetry since junior high,” she confides. “It’s so hard to decide.”

Scott Freeney ‘97 smiles and nods. He’s heard this before. “What’s the rush?” the former Syracuse football star asks. “Exploring is one of the best things you can do as a student. The more you explore, the more versatile you become. Employers like that in a graduate.”

Freeney should know. A top linebacker from Clarke Central High School in Athens, Georgia, he played for Syracuse in the mid-nineties, a heady time in the program’s 130-year history. Freeney reinvented himself in the early 2000s, spending six years as the team’s academic coordinator.

Today, the Syracuse native brings the same winning mentality to academic and career advising in A&S. He works with hundreds of undergraduates such as Hannah, analyzing the Xs and Os of college life and beyond.

Yet, the gridiron is never far from Freeney’s thoughts, given his recent induction into the Athens Athletic Hall of Fame (AAHOF).

“This induction is a big deal for me,” admits Freeney, who spent most of high school near the University of Georgia, a perennial SEC juggernaut. “Syracuse is my home, but Athens has a special place in my heart.”

Freeney used football to find purpose in life. Born and raised in Syracuse, he and his siblings lived with their mother, Adelle, not far from a low-income housing project on the East Side.

After a year at Henninger High School, Freeney moved to Athens to be with his father. The chance to play for Billy Henderson, one of the winningest coaches in Georgia prep history, sweetened the deal. “Coach Henderson and his staff [at Clarke Central] helped make me into the person I am today,” Freeney says. “Without them, I wouldn’t have been able to play D-1 ball, much less gotten into an institution such as Syracuse.”

Freeney thought about enlisting in the Army or Marines after high school, but Mark Whitley, who coached track and football at Clarke Central, had other plans for him.

The two bonded during Freeney’s senior year, when things got tough at home. Whitley virtually adopted Freeney, taking him under his wing and giving him a place to stay. He reminded Freeney of his natural abilities, which included an unquenchable work ethic. “I had no choice but to do well in school and in football,” Freeney recalls. 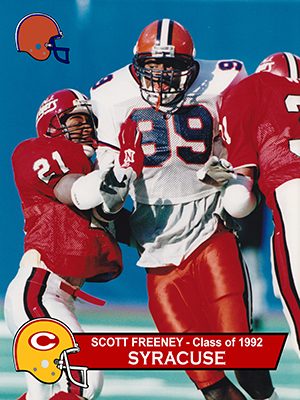 Freeney was a prize of Syracuse’s 1992 recruiting class.

At 6-3 and 235 pounds, Freeney was imposing, but fast on his feet. His instincts as a high-level playmaker made him one of the top defensive ends in the Southeast. They also earned Freeney a spot on the 1991 roster of the USA Today All-USA High School Football Team, and netted him the Gatorade State High School Player of the Year award. Then the phones began to ring.

Entertaining multiple offers, Freeney jumped at the opportunity to return to Syracuse. His physicality lifted the Orange to three bowl victories, notably a nailbiter against Colorado in the ’93 Fiesta Bowl and a 41-0 trouncing of Clemson in the ’96 Gator Bowl. “It was a magical time,” recalls Freeney, a four-year letter winner. “While I was there, Coach Pasqualoni produced a handful of NFL Draft selections, including wide receiver Marvin Harrison and quarterback Donovan McNabb [for the 1996 and ’99 drafts, respectively].”

“Scott is kind of my role model,” Freeney’s next-door neighbor told The Post-Standard in 1993. “I see a lot of kids going down to the corner and doing wrong things. He is going to college. He’s going to be somebody.”

Freeney fulfilled his neighbor’s prediction, eventually trading his cleats for a clipboard. He was a graduate assistant at St. Cloud State and then Purdue, leading the Boilermakers to back-to-back Alamo Bowl victories and an appearance in the 2000 Outback Bowl, losing, ironically, to Georgia in overtime.

“He coached at a high level, right out of Syracuse,” Mark Whitley recalls. “I wanted to hire Scott, but the college ranks already had their hooks in him.”

Freeney found his way back to Syracuse in 2002. As the team’s academic coordinator, he helped student-athletes remain focused on and off the field.

The “Gentle Giant” (as Whitley called him) stressed the importance of character—on the field, in the classroom, in the community. Despite his size, Freeney was all about brains over brawn. “Good football players are usually good scientific thinkers,” says Freeney, who earned a master’s degree in higher education from Purdue. “They have no choice, given the stop-and-go structure of the game.”

Freeney left SU Athletics in 2008. For the next decade, he served in various positions on campus while raising a family. Today, the father of three works from a slightly different playbook.

In A&S, he stresses the value of a liberal arts education—critical thinking, creative problem solving and teamwork. Not too different from what he used to hear in the locker room and on the sidelines.

“Scott’s extraordinary career as a student-athlete, followed by his professional success, is inspiring,” says Steve Schaffling, assistant dean of student success in A&S. “He gives students the tools they need to take control of their education. Scott helps them realize their potential and, in the process, find their purpose.”

Advisees agree, praising Freeney for his genuine interest in and concern for them as individuals. Says one student, “I don’t think you’ll find a more patient or understanding advisor. Scott Freeney always asks about me and my studies—wants to know how I’m doing. He wants to see me succeed.”

Freeney takes the praise in stride. “I just like helping students find their way,” he says self-effacingly.

“He makes me feel like a winner,” Hannah smiles.