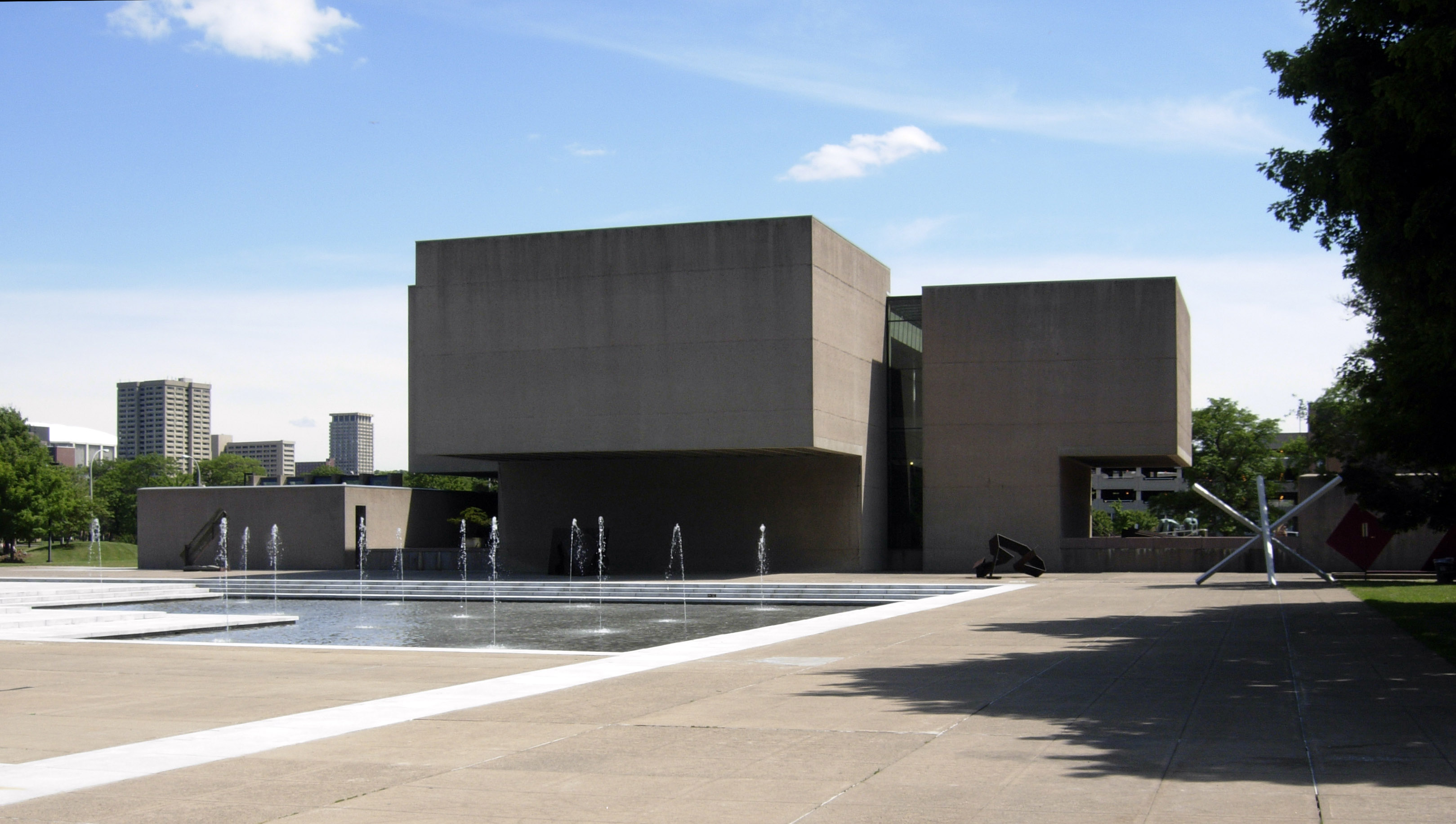 The Everson Museum of Art in downtown Syracuse.

The Everson Museum of Art is currently celebrating the 50th anniversary of its iconic, I.M. Pei-designed building. As part of a comprehensive effort to revitalize Pei’s masterpiece, the Everson has partnered with the School of Architecture to host an international competition to design a museum café. The café will also serve as a venue to showcase and put into use The Rosenfield Collection, a newly acquired 3,000-plus piece functional ceramic art collection assembled by Dallas-based couple Louise and David Rosenfield.

After an internal review of invited submissions from architecture offices in Canada, China, Greece, Italy, Spain, Sweden and the United States, four finalists have been selected: FreelandBuck (Los Angeles/ New York), MILLIØNS (Los Angeles), NATURALBUILD (Shanghai) and Norman Kelley (Chicago/New Orleans). Each finalist will travel to Syracuse in September to participate in a public symposium and present a developed proposal to a jury of professionals in architecture, ceramics and the culinary arts. The jury will select one firm to receive a commission to complete the new café.

“This competition provides a tremendous opportunity for some of the world’s most talented emerging architects to propose an intervention in what is undoubtedly one of the late I.M. Pei’s greatest works,” states Kyle Miller, Syracuse Architecture assistant professor. Miller and Syracuse Architecture Dean Michael Speaks are organizing the competition in collaboration with the Everson.

“This unique project proposes new ways of thinking about the integration of art and architecture, which is a critical component of Pei’s original design,” says Everson Director and CEO Elizabeth Dunbar. “This café will be unlike any other in the world.”

In addition to hosting the design competition, the Everson is currently working with students from Le Moyne College to conduct a marketing study and VIP Structures to assess engineering needs. The projected date of completion for the café is summer 2020.

The Everson is one of the first museums in the United States to actively collect and exhibit ceramics. With comprehensive collections and archival holdings central to the history of American studio ceramics, the Everson is focused on becoming the country’s leading center for ceramics exhibition and research.

The Rosenfield Collection was assembled by Everson Honorary Trustee Louise Rosenfield over two decades and is the preeminent collection of contemporary functional pottery in the United States. “Every piece in The Rosenfield Collection is museum worthy. It is incredible that Louise wants the pieces to be used, honoring the spirit in which they were made,” says Garth Johnson, the Everson Paul Phillips & Sharon Sullivan Curator of Ceramics. “The collection is international in scope and represents both emerging talents and established masters.”

This project is part of a strategic initiative to restore and enhance the Everson’s building with the aim of positioning the historic structure as a source of civic pride, while simultaneously creating a dynamic and innovative museum for a 21st-century audience. Recently completed facility improvements include the Danial Family Education Center, a state-of-the-art auditorium renovation, and the Paul Phillips and Sharon Sullivan Ceramics Center. These projects were made possible by generous contributions through the The Everson. First and Forever. comprehensive campaign.

ABOUT THE FINALISTS
FreelandBuck is a Los Angeles- and New York City-based architecture office founded and led by Brennan Buck and David Freeland. Recipients of numerous awards, including the 2019 Emerging Voices award from The Architectural League of New York, FreelandBuck has recently completed several notable residential projects in Los Angeles, including the Stack House, which received the AIA’s highest award for design distinction.

MILLIØNS is a Los Angeles-based experimental architecture practice founded by John May and Zeina Koreitem. Named among the top 50 global interior architects in 2019 by The Architects Newspaper, MILLIØNS work, including their acclaimed design for the Jack Erwin Flagship store in New York City, has received numerous design awards and citations.

NATURALBUILD is a multidisciplinary design studio based in Shanghai. Led by Yanfei Shui and Yichi Su, NATURALBUILD is among the most highly regarded emerging offices in China. Their work has received numerous design awards and has been featured in the 2018 Venice Architecture Biennale, the Shanghai West Bund Biennale and in publications such as Wallpaper, a+u, Time and Architecture and Dezeen. Among their most notable completed projects are the Waima Road Warehouse Renovation, Yushan Island Hotel, J House and the Soft Matter Pavilion.

Norman Kelley was founded by Carrie Norman and Thomas Kelley and is operated jointly between New Orleans and Chicago. Recipients of the 2014 Architectural League of New York Young Architect’s Prize, the office has exhibited at the 2014 Venice Architecture Biennale and the 2015 Chicago Architecture Biennale. Their award-winning projects have been published in Domus, Dezeen, Wallpaper, Frame and Design Milk. Among their most notable projects is their design for retailer Aesop in Chicago, completed in 2016, and the recently completed design for the Notre clothing shop in the Fulton-Randolph Market Historical District in Chicago.

ABOUT THE EVERSON
The Everson Museum of Art, whose roots extend to 1897, is internationally recognized for its extensive and significant collection of ceramics, its pioneering art video collection and its distinctive structural design by the noted architect I.M. Pei. The operation of the Everson Museum of Art is made possible with funding from the Dorothy and Marshall M. Reisman Foundation; the County of Onondaga administered by CNY Arts, The Trust for Cultural Resources of Onondaga County; the New York State Council on the Arts, a state agency; the Everson Board of Trustees; and the Everson Members’ Council.