As The Stand director Ashley Kang tells the story, the project that would define 10 years of her professional life began in 2007, when now-retired professor Steve Davis wanted to get his news reporting students off campus. 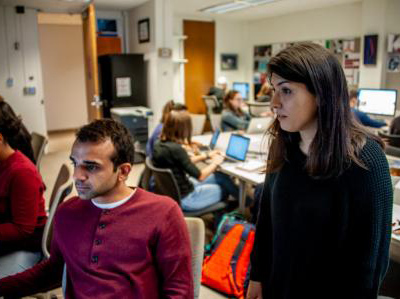 Ashley Kang helps a student set up the print layout for the semester’s last print issue of The Stand. Photo by Hieu Nguyen.

“All these students would interview their roommate or a professor from another class,” Kang says. “[Davis] decided to cover the South Side [to make students] get off campus and talk to real people.”

Syracuse’s South Side lies just southwest of the Syracuse University campus, and was designated as the neighborhood with the nation’s highest concentrated poverty among black and Hispanic populations by the 2015 Century Foundation report “Architecture of Segregation.”

“The South Side has traditionally been under-covered by Syracuse’s mainstream media with the majority of coverage focused on incidents of violence, drugs and poverty,” says Kang.

At the end of that first semester covering the South Side, Davis printed a collection of those stories and distributed them in the community. The response was so enthusiastic that he decided to make the project more permanent, and was able to officially launch the paper in 2009, at which point Kang came on as director. Now, The Stand is celebrating 10 years serving the South Side, with a website for regular coverage of events in the community and eight issues per year of a print version with more in-depth feature stories.

“The print issue is really a chance to not just cover ‘this happened,’ but why is this policy being put in place? How is going to affect the residents?” Kang says. “Talking to the people and getting their voices heard.”

Putting out a regular newspaper is a herculean task, and Kang serves as something of an orchestra conductor for the combination of students, volunteers and community members who generate the content. Kang assembles story ideas and assigns them to students from an advanced news reporting class. Once the articles are written, they go to professor Greg Munno’s editing class for line editing and fact checking. When the print version is ready to be assembled, Munno’s class also prepares the layout. Kang supervises the entire process from beginning to end, and once the print version comes out, she starts over again.

In addition to the students who pick up the South Side beat as part of their coursework, volunteers are a big part of what keeps the newspaper running. Reporting for The Stand is a path to experience, professional work samples and, occasionally, accolades; in April, work from The Stand received eight Syracuse Press Club Awards.

While the original inspiration behind the project was getting the students off campus to tell stories about people whose lived experience was different from their own, the project has grown to be more than an educational exercise.

“It’s a mutual benefit,” says Kang. “Community members can write, or they can suggest stories.”

South Side residents provide content, such as the music column “The Friendly Five,” and participate in regular features, as with the Fatherhood Series, which challenges the cultural narrative of absent black fathers.

“A lot of the images that came out of [‘From Where We Stand,’ a summer] photo project, were black fathers playing with their children, being actively involved,” Kang says. “People said, ‘This isn’t what we see in the media or portrayed on TV,’ so we launched the Fatherhood Series. Those have been some of my favorite interviews to do.”

Moving forward, Kang is in talks with a consultant, paid for by a Community Listening and Engagement Fund grant, to increase student volunteer engagement. But mostly, she just wants to keep The Stand doing what it does best: keeping local journalism alive.

“[Students] can walk three blocks and interview people and come back and write their stories. It’s a great project to get that experience and sustain local journalism.”

In the end, Kang says, her favorite part of her work comes back to the community she serves.

“Just hearing from readers or hearing from people that we’ve interviewed,” she says. “‘That’s my story, that’s what I wanted to share. No one’s ever told my story.’”