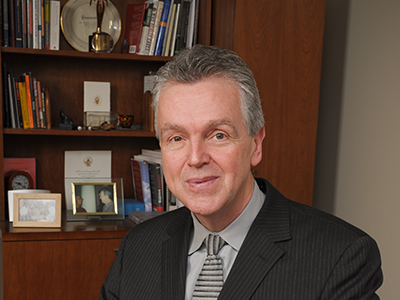 Walsh received a bachelor’s degree from Le Moyne College and a master’s degree in drama from the College of Visual and Performing Arts. He taught at Christian Brothers Academy for three years before joining Syracuse Stage in 1979 as the founding dramaturg, main stage director and producer. There, he created innovative and dynamic performances.

From 1987 to 1991, Walsh served as an events administrator for the Division of Student Affairs, working with students in staging dance, music, theater and other cultural events on campus. He was also involved with the opening of Goldstein Auditorium.

He was appointed assistant vice president for development and public affairs for New York City in 1999, where he successfully oversaw the University’s efforts to expand and strengthen its fundraising, public and alumni relations, and marketing activities in the greater New York area. He played a key role in bolstering the role and presence of the Lubin House in New York City.

In 2002, he became vice president of leadership gifts and in 2005 was appointed senior vice president of institutional advancement by Chancellor Nancy Cantor. In this role, Walsh led the division in the highly successful $1 billion “Scholarship in Action—The Campaign for Syracuse University,” which was completed in 2012.

Walsh cultivated deep and lasting relationships with many major donors to the University. He was involved with naming major gifts for the Setnor School of Music and Setnor Auditorium, Newhouse 3, Menschel Media Center, Falk College, Dineen Hall and the Phanstiel Scholars, and major gifts for the Remembrance Scholarship Program and University Lectures, to name just a few.

In a 2017 interview with Syracuse University Magazine, Walsh said he drew on his education and experience in the theater for his role as a fundraiser, and in convincing others to invest in the University. “In the theater, you learn through acting training to understand the text and the subtext and the motivations that people have in any given situation,” he said. “It is absolutely essential that you work collaboratively—demanding collaborations among a complex set of people. You learn to be very comfortable putting yourself out in public. These skills, the theater develops at a high level. So it prepared me very well.”

Walsh played a key role with the University’s Board of Trustees, working closely with the board to reconnect and truly engage each member and encouraging them to be active and involved.

“Tom’s work is forever a part of the Syracuse University fabric and leaves a lasting legacy,” says Chancellor Kent Syverud. “His contributions have enabled the success of every part of this University.”

Outside of the University, Walsh was the founder of The Blathertones, an experimental theater group, and worked with the Berkshire Theater Festival and New York’s La MaMa Experimental Theater Club. He served on the New York State Council on the Arts advisory panels for a decade and was former chair of the board of Light Work. He was also a member of the board of directors for the Syracuse International Film and Video Festival, the Everson Museum and the Finger Lakes Land Trust.

Walsh is survived by his wife, Maureen; his daughter, Margaret; and several nieces, nephews and close friends.

Calling hours will be held on Friday, May 17, from 4-7 p.m. at the Burns Garfield Funeral Home, 3175 E. Genesee St., Syracuse. A memorial will be held on Saturday, May 18, at 3 p.m. in Syracuse University’s Setnor Auditorium in Crouse College, followed by a reception in the Goldstein Alumni and Faculty Center. Parking will be available in the Hillside parking lot and the Irving Garage. To request accommodations, contact Joanne Corasaniti at 315.443.2328.

Memorial contributions may be made to a Hospice of your choice or to the Thomas Walsh Fund in the Department of Drama in the College of Visual and Performing Arts.