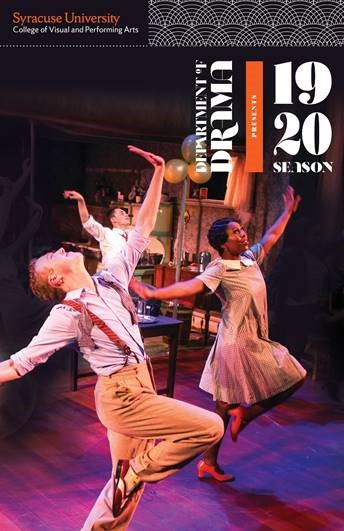 Classic plays and musicals that illuminate the world of today highlight the 2019/2020 Department of Drama season. From Shakespeare to Arthur Miller to Rodgers and Hammerstein, the season is a feast of great language, great music, big ideas and big entertainment. Subscriptions and Flex Packs are available now.

“I am excited by the many opportunities this season presents for us to explore the art of storytelling,” says department chair Ralph Zito. “Each of these plays is a classic example of its genre, or is directly linked to a classic. All of them invite us to explore and critique the values, themes and underlying assumptions of the eras in which they were written and the eras that they depict. Further, they demand that we share these stories in ways that speak to our current cultural condition.”

The singular sensation that is “A Chorus Line” kicks off the season directed and choreographed by Brian J. Marcum with musical direction by Brian Cimmet. Winner of nine Tony Awards and the Pulitzer Prize for Drama, “A Chorus Line” dates to 1974 when choreographer Michael Bennet gathered a group of his friends in a studio in New York to talk about their lives as dancers. For 12 hours, with a reel-to-reel tape recorder running, they shared their personal stories. From there Bennet invited composer Marvin Hamlisch and writers James Kirkwood, Nicholas Dante and Edward Kleban into workshops with the dancers. Their work together became “A Chorus Line”—a passionate tribute to Broadway’s chorus dancers: those valiant and highly trained performers who back up the star or stars—and often make them look even more talented than they are.

“As with most humans, panic sleeps in one unlighted corner of my soul,” Arthur Miller once wrote about his inspiration for “The Crucible,” the second show in the season. “When I walked at night along the empty, wet streets of Salem . . . I could easily work myself into imagining my terror before a gaggle of young girls flying down the road screaming that somebody’s ‘familiar spirit’ was chasing them.” Miller based “The Crucible” on the Salem witch trials of 1692. He wrote it in 1953 during the hearings of the House Committee on Un-American Activities. Comparison was inevitable, deliberate, revelatory and frightening as Miller zeroed in on how fear easily turns to hysteria, and accusation supplants truth. “The thought that the state has lost its mind and is punishing so many innocent people is intolerable,” the playwright noted. With longtime faculty member Gerardine Clark directing, “The Crucible” serves as a potent reminder that irrational and unfounded fear of the “other” knows no boundary or time.

Donna Drake has scored great success as director of the last two Syracuse Stage/Department of Drama holiday co-productions, “The Wizard of Oz” and “Elf The Musical.” She returns in the new season to direct the family favorite “Disney’s Beauty and the Beast,” with choreography by Anthony Salatino and flying effects by ZFX. This enchanting Disney classic tells the story of a young prince transformed into a horrid beast by a wicked spell, and of a young woman, Belle, who helps restore him through the power of love. As with previous co-productions, the cast will feature a mix of professional actors and Syracuse University Drama students.

“The unique partnership between the Department of Drama and Syracuse Stage—and the myriad ways it benefits not only our students but also Syracuse theater-goers and their families—is nowhere more evident than in the annual holiday co-production. We cannot wait to share this ‘tale as old as time’ with young and old alike,” Zito says.

“Romeo and Juliet” may be the greatest expression of romantic love in the English language, as some have called it, but it is a depiction of love amid the tumult of brutal violence. In Romeo, Juliet, Mercutio and the Nurse, Shakespeare created four of his most engaging characters and tour de force opportunities for actors. He wrote the play on his way to creating the five great tragedies, and the connection can be seen in the five corpses that define the ancient feud between the Capulets and the Montagues. Four hundred years ago Shakespeare understood how intolerance begets violence and violence victimizes an entire society: “See what a scourge is laid upon your hate . . . All are punish’d.” Thom Miller directs the fourth show in the season.

It is only fitting that in a season filled with classics that the great Richard Rodgers and Oscar Hammerstein II find representation. “A Grand Night For Singing” is a musical review that collects over 30 treasured works from Rodgers and Hammerstein hits such as “Oklahoma!,” “South Pacific,” “The Sound of Music,” “Carousel,” “The King and I” and “Cinderella,” as well as lesser-known shows like “Allegro,” “Flower Drum Song” and “Pipe Dream.” Conceived by Walter Bobbie, “A Grand Night for Singing” contains many of the most beloved, uplifting and romantic songs in musical theater history.

The season concludes with a magic-comic take on the modern classic The Seagull: Reza De Wet’s “On the Lake,” directed by Stephen Cross. De Wet, who died in 2012, was a South African writer, director and actor, who wrote in English and Afrikaans. Her twelve plays won numerous literary awards in South Africa. In “On the Lake,” de Wet revisits “The Seagull,” with an eye on exposing the tensions beneath the surface of the Chekhovian world. Zooming in on Constantine’s symbolist play-within-the-play, de Wet imagines the experience from Nina’s perspective: a dreamlike vision of the future, where the hope of escape is linked directly to the potential for the theater itself to rise up and fly away.

“I am immensely proud of the consistently high-quality work produced by our students, faculty and guest artists—working side-by-side with the Syracuse Stage production staff to create season after season of entertaining, thought-provoking and moving theatrical experiences. Next year will be another exceptional season of theater,” Zito says.