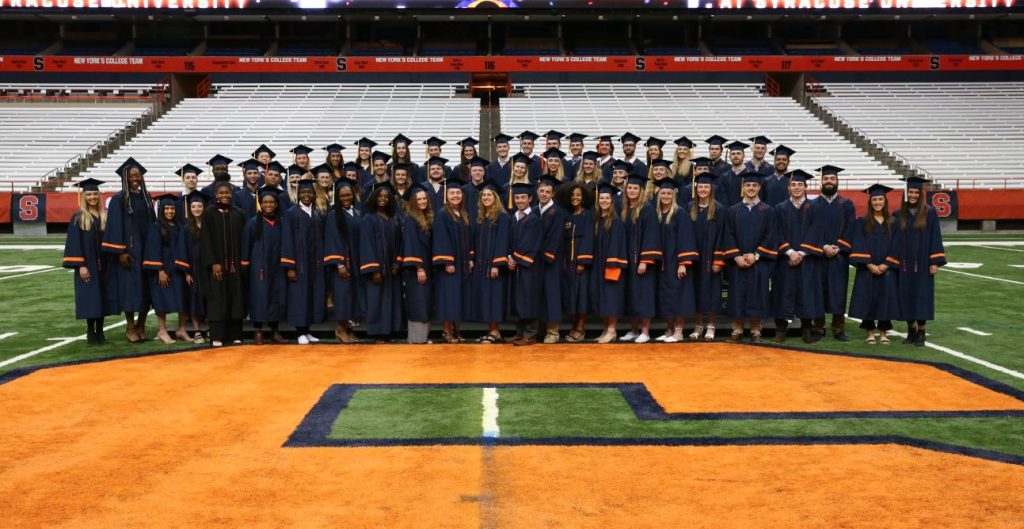 The Class of 2019 features more than 90 student-athletes.

“The Academic Progress Rate metric is a real-time look at the health of an athletics department,” says Syracuse University Assistant Provost Tommy Powell. “It assesses how well schools are keeping the student-athletes eligible and how well they are retaining them at the University. It also has real implications to the postseason. If a team were to drop below the NCAA cut score, that team would not have access to the postseason, bowl games or NCAA Championships.”

The APR score follows individual student and total program progression at each Division I institution, tracking student-athletes by assigning points for each semester they remain eligible and for staying enrolled or graduating. Syracuse’s seven teams with a perfect four-year APR ranks fourth among the Power 5 conferences in sports that all schools offer. Notre Dame and Northwestern have nine and Duke has eight. 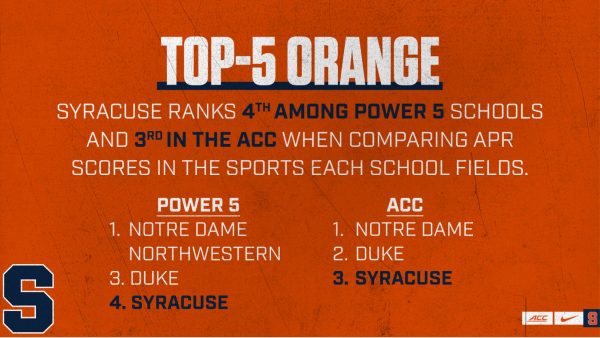 In addition to the multi-year average, the NCAA tracks one-year scores for every team. For 2017-18, 12 Orange teams posted a perfect one-year rate, which is the highest number of teams for Syracuse to accomplish that in the same year. The programs to score a perfect 1,000 single-year score are men’s cross country, men’s soccer, men’s track and field, women’s basketball, women’s cross country, women’s rowing, field hockey, women’s ice hockey, women’s soccer, softball, women’s tennis and women’s volleyball.

“The success our programs are having with the APR goes back to a complete academic support system that begins the moment we recruit the student-athlete,” Powell says. “It is the commitment we make to a student-athlete that we are going to provide them with great support here in the athletics department from an academic standpoint, including tutorial, academic coordinating and advising, and the University making sure that each student-athlete is on a four-year plan to graduate. We start before they get here and then support them through graduation, making sure that they have the tools that they need when they leave Syracuse University. They graduate as a proud alum who has options for the future.”

Every Syracuse team surpassed the minimum standard of 930 (a perfect score is 1,000) and, in combining the program numbers, the University earned the highest fo 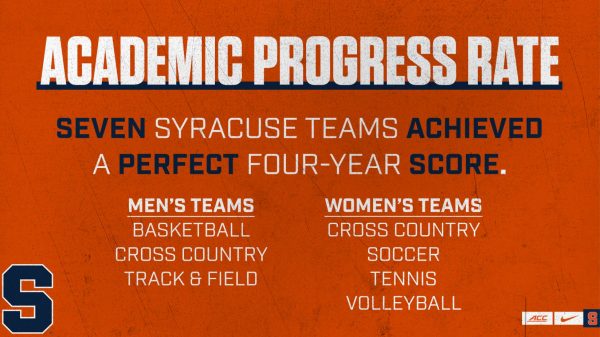 “Our teams are succeeding in competition with 11 of our teams competing in the postseason already and four more with that opportunity ahead of them,” Powell says. “As teams are having athletic success, the focus of the student-athlete gets greater. A good analogy is we like to tap into their competitive nature in the classroom the same way our coaches tap into their competitive on the field. As they are focused and having success, that success often translates into their studies, into their workouts, everything for the total package of the student-athlete.”