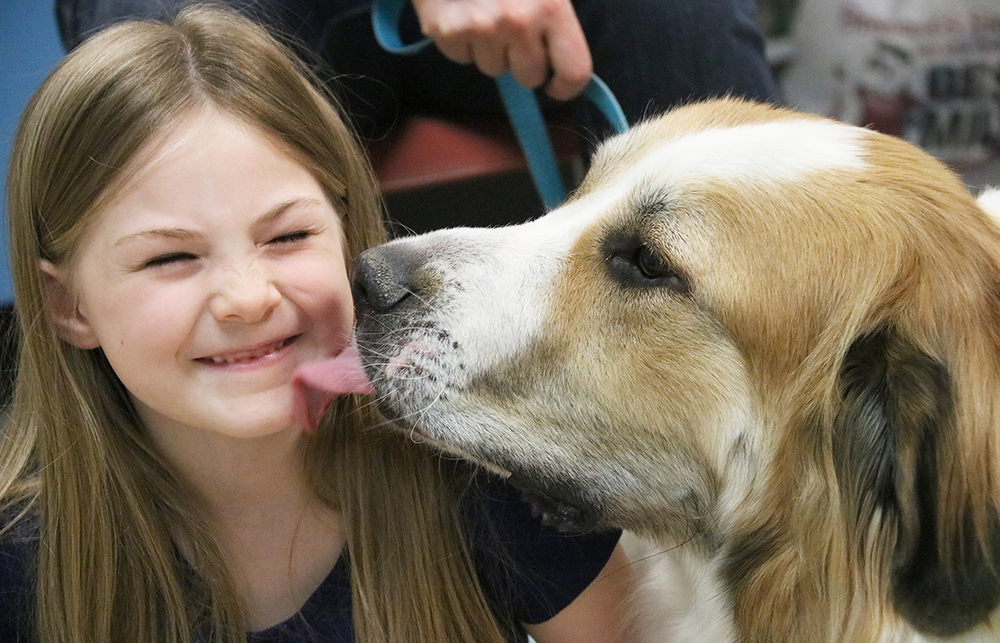 “Gus” is a 107-pound St. Bernard-Great Pyrenees mix—a loving, cuddly giant of a pup who is seriously dedicated to his job. He and his pet parent, Amy Dumas, assistant director of the Research Center in the Falk College, are regular visitors at Minetto Elementary School in Minetto, New York, where they meet with first-graders just starting to read.

Gus, a therapy dog, offers a patient, non-judgmental presence to the new readers as they practice their reading skills aloud, as Dumas, a volunteer and president of Pet Assisted Wellness Services of Central New York (PAWS of CNY), holds his leash and watches over.

“The students read to Gus and show him the pictures. They pick funny books and bring out cat books to show him,” Dumas says. “Some of them hold the book and pet the dog at the same time; sometimes they’ll just spend time with him.” 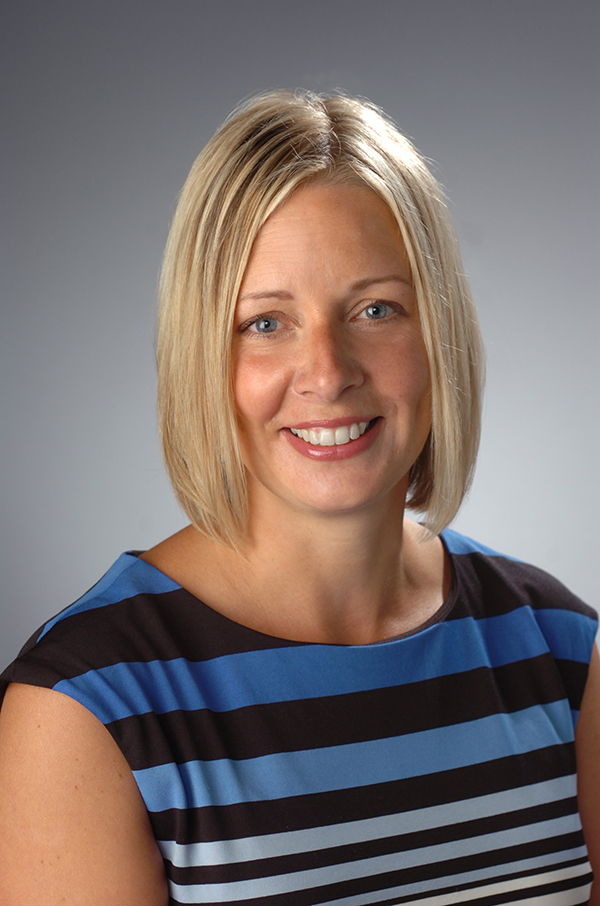 For Dumas, it’s a joy to be part of PAWS and share the love and companionship of her canine friend. For Gus, it’s a chance to get extra attention and sweet hugs. He knows his job well.

“Gus is an absolute love. He loves the kids, he loves the Minetto School, and he is very happy to lie down on the floor and listen to their books,” Dumas says.

Three-year-old Gus has been with Dumas and her family for two years, but it’s the fourth therapy dog for Dumas. Her work with the organization began while Dumas’ youngest son, Jake, was in the third grade over a decade ago. Jake wanted to bring their then-golden retriever, Boomer, to school. At the time, Dumas taught horseback riding and trained horses part time at various farms, including one belonging to Peggy Florian, co-founder of Sunshine Friends, which later became PAWS.

Dumas asked Florian about how Boomer could become certified, and Florian got her started in the program. Dumas and Boomer began at the Minetto Elementary School in the third grade. They later transitioned to the first grade, which is more appropriate for that aged reader. “It’s really about building confidence and having an unbiased listener to learn how to read,” Dumas says. 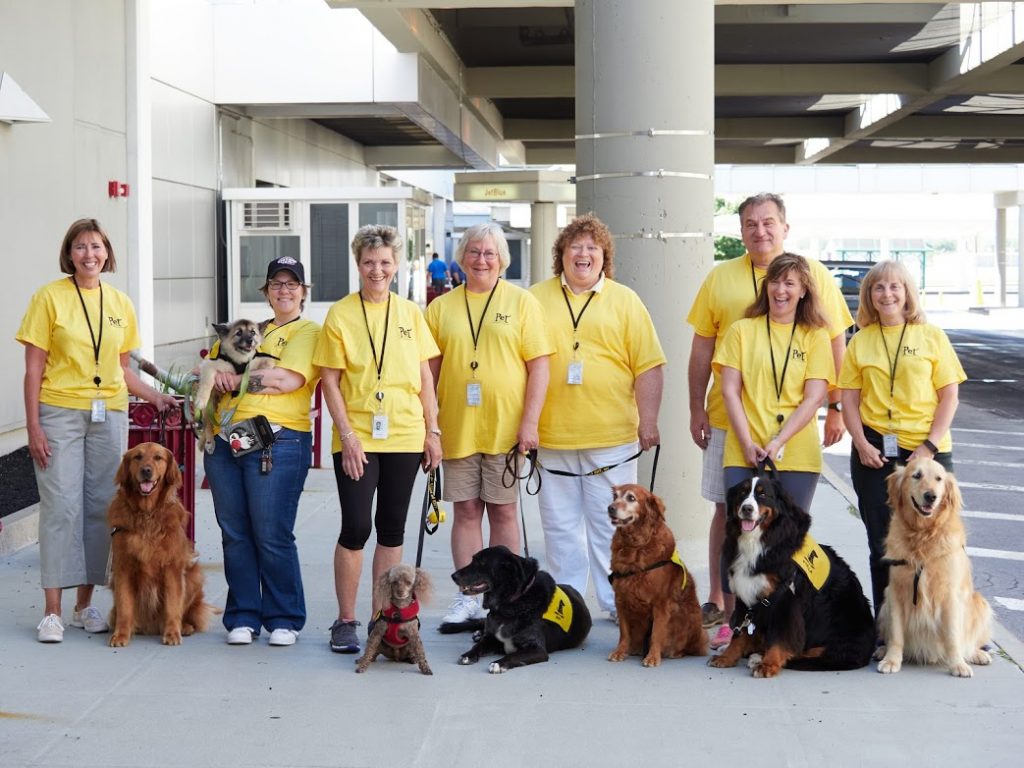 “PAWS volunteers visit 55 nursing facilities on a monthly basis, and we have over 30 reading programs,” says Dumas, who also visits nursing facilities with Gus. “We visit local colleges and universities, including Syracuse.” PAWS will be partnering with the new wellness center at The Arch, which will be operational this fall, to help provide pet therapy teams.

Those interested in being a volunteer team with their pet are required to take an initial test and a facility test to become certified by PAWS. Interested volunteers can go through an optional five-week PAWS therapy dog training class, which covers basic obedience and situations and equipment, such as wheelchairs, that pets might encounter during visits.

Dumas’ first dog, Boomer, was her therapy partner for 12 years, before retiring two years ago. He later passed away. Along with Gus, Dumas currently has a 20-pound beagle, Sadie, who is in training, and a retired Labrador retriever, Millie.

“People ask me what breed they should get to be a therapy dog, but it’s really more about the dog’s temperament and comfort level, and their interest,” Dumas says. Pets need to be engaged and enjoy getting attention. “It’s important that they are happy doing it,” she says. 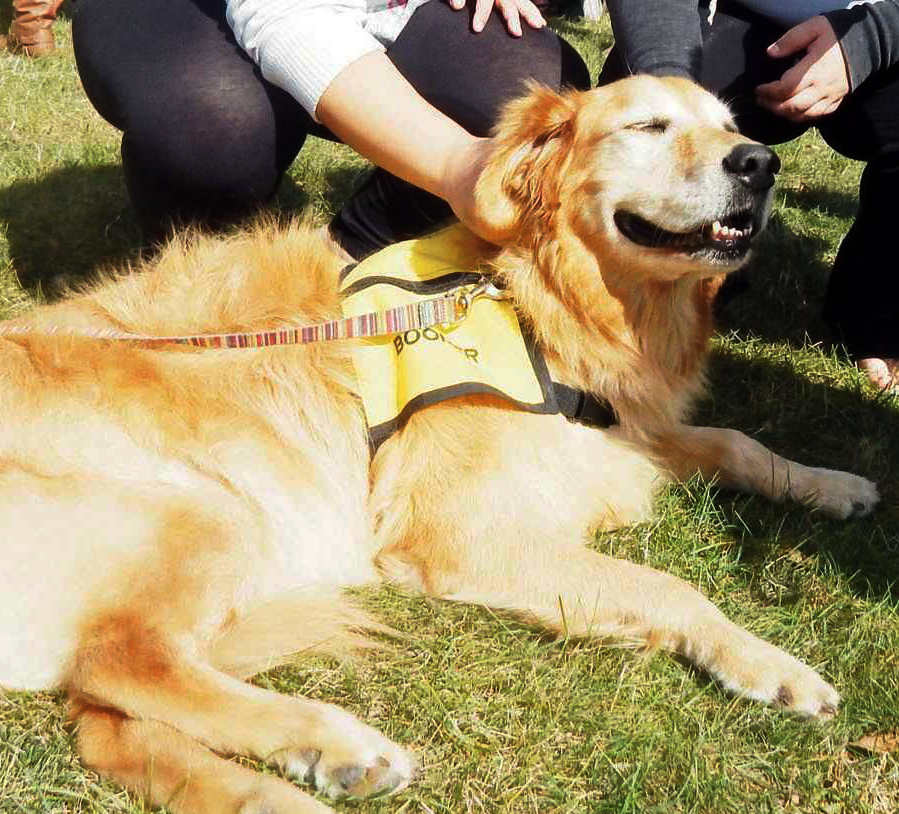 Each visit to a facility or school is different, and the pets are intuitive to each situation. “The pet walks into the room, and it is an absolutely safe place to feel what you’re feeling,” Dumas says. “They give us the space to know it’s OK if we’re sad, if we miss our family or our pet or if we’re overwhelmed.”

Dumas recalls a visit with Boomer to a nursing facility where a resident was nonverbal and unresponsive. Boomer put his nose under her hand and then her facial expression changed. “She knew the dog was there and moved her fingers to pet his nose,” Dumas says.

In another visit, Dumas and Boomer entered a room where a patient’s bed was on the floor due to the patient’s fall risk. “Boomer crawled onto the bed and curled up next to him,” Dumas says. “The gentleman never really moved but Boomer knew what he needed to do in that moment.”

Dumas can tell the dogs enjoy their work and are eager to visit when Dumas brings out their yellow pet therapy dog vest. “You can see the look on their face. They smile,” Dumas says. “They are very proud of what they do. They sense how loved they are when they go into the places, by the people they visit, but also the staff, visitors and anyone they meet.” 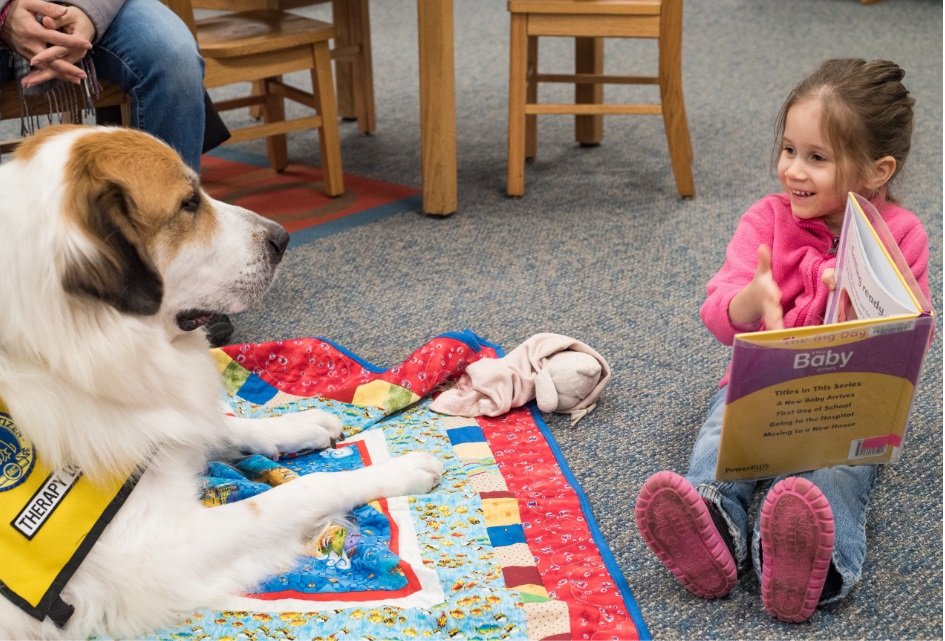 Gus, a therapy dog, and a new friend at Liverpool Library. (Photo by Tony Coffield, a first-year student in the Newhouse School)

Dumas enjoys how people’s interaction with her changes when she has a dog; people are easier to talk to, and there is a commonality of people’s love for animals.

“We as a society always talk about being kinder, and being part of PAWS lets me do that in a very easy way. I can bring something special to someone for that day,” Dumas says. “The other thing I think about is that not everyone has access to a pet. In this way, especially for children, they can see the benefit and joy of having a pet, so they can grow up to appreciate animals.”