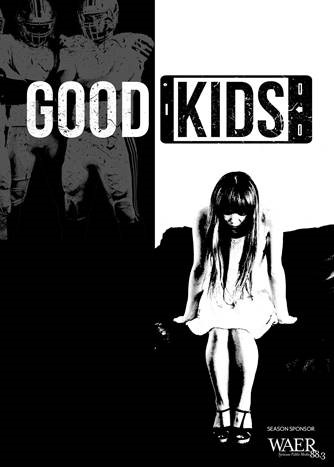 The Department of Drama concludes its 2018-2019 season with Naomi Iizuka’s “Good Kids.” This production is directed by faculty member Holly Thuma and features New York City-based actor Carey Cox, who portrays the character Dierdre. “Good Kids” runs May 3 through May 11 in the Storch Theatre at the Syracuse Stage/Syracuse University Drama Complex, 820 E. Genesee St., Syracuse.

Inspired by the 2012 Steubenville, Ohio, rape case, “Good Kids” takes a dive into a haunting and disturbing incident that occurs during a high school party, including a difficult aftermath. The play focuses on a group of college-bound football players, soccer stars, popular girls and an “outsider” as they attempt to piece together the events of a night they can barely remember. The play confronts the layers of complexity introduced by social media as private stories become public and inaccurate recollections obfuscate the truth.

Department of Drama Chair Ralph Zito hopes that “each of us might take a look into seemingly small decisions that we make and understand how they can contribute to a larger evil.”

Thuma explains that the play “paints a picture of how we as a culture view issues of rape and sexual assault.” These topics and the circumstances in which they occur are not new and “the difficulty in prosecuting crimes of this nature, the tendency to cover them up, and the cultural inclination to blame the victim are not new either.”

Thuma and Zito acknowledge the challenging nature of the material and encourage the audience to be empathetic and to see that there are steps everyone can take to address problems in our society. It is important to “join in the cultural discussion, conversation by conversation,” Zito says.

The Steubenville High School rape occurred on the night of Aug. 11, 2012, when a high school girl, incapacitated by alcohol, was publicly and repeatedly sexually assaulted by her peers, several of whom documented the acts on social media.

The crime and ensuing legal proceedings generated considerable controversy and galvanized a national conversation about rape and rape culture.

Appearing as a guest artist, Carey Cox portrays the character Deirdre. Deirdre serves as a kind of narrator to action in “Good Kids.” Cox made her Broadway debut as Laura’s understudy in Sam Gold’s production of “The Glass Menagerie,” which starred Sally Field. Cox has also been a company member at PlayMakers Repertory Company where her credits include “Three Sisters,” “We Are Proud to Present a Presentation…,” “Seminar,” “Trouble in Mind,” “Mary’s Wedding” and “Into the Woods.” She participated in Queens Theatre’s inaugural Theatre for All training program for actors with disabilities and was an actor and playwright for the Theatre for All short play readings. She serves on the board of directors for Born Dancing, an inclusive dance company.

Iizuka’s “Good Kids” started off the Big Ten Theatre Consortium’s New Play Initative in 2014, which commissioned work from women writers that featured strong female roles. “Good Kids” rose to prominence upon its release in 2015 and has been especially popular on college campuses. Iiuzuka’s other plays include “36 Views,” “Polaroid Stories,” “Language of Angels” and “Skin.” Iizuka is currently being commissioned by the Guthrie Theatre, the Mark Taper Forum and the Kennedy Center to produce new work.

Performances of “Good Kids” with open captioning or American Sign Language (ASL) interpretation are scheduled. For more information and tickets, visit the College of Visual and Performing Arts website.