Former First Lady of the United States Laura Bush will speak at Syracuse University as part of the D’Aniello Family Speaker Series on Wednesday, May 1, at 5:30 p.m. in the Whitman School’s Marvin and Helaine Lender Auditorium. 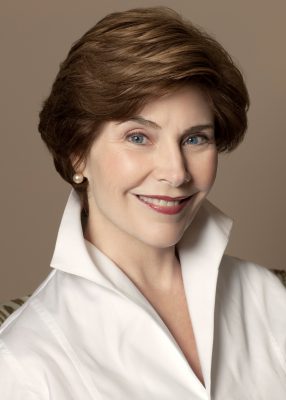 The event includes a discussion with Mrs. Bush, the 43rd First Lady of the United States, followed by a reception. All members of the campus community are welcome to attend. Seating is limited.

Having served as First Lady from 2001-09, Mrs. Bush is known for her advocacy of literacy, education and women’s rights. After leaving the White House, President and Mrs. Bush founded the George W. Bush Presidential Center in Dallas. The center is home to the Bush Presidential Museum and Library and the George W. Bush Institute, a public policy center established to advance human freedom, economic growth, education reform and global health.

“We are honored to have Mrs. Bush visit campus and share her experiences with our students, faculty and staff,” says Vice Chancellor Mike Haynie. “We are continually grateful to the D’Aniello Family for their generosity in supporting these and other initiatives.”

Bush’s visit follows the completion of the first George W. Bush Institute’s Stand-To Veteran Leadership Initiative, a program designed for individuals serving the nation’s veterans who are motivated to broaden their skill sets, knowledge and influence across the country. Over the course of the fall semester, distinguished Syracuse University faculty and staff members traveled to Dallas to present and learn from Mr. and Mrs. Bush. as well as from other influential authorities in the veteran and national security sectors. Amy Taft, curriculum and learning manager at the Institute for Veterans and Military Families (IVMF) at Syracuse University, was among the 33 selected in the inaugural class while various University leaders, including Haynie and IVMF COO Maureen Casey, presented during the initiative.

Bush is speaking as part of the D’Aniello Family Speaker Series created by University Trustee Dan D’Aniello ’68 and his wife, Gayle. The Universitywide lecture series promotes dialogue on subjects with national impact with some of the nation’s most prominent leaders and thinkers speaking on topics such as entrepreneurship, free enterprise, patriotism, veterans’ issues and leadership.

Dan D’Aniello co-founded The Carlyle Group, an international investment firm based in Washington, D.C. Prior to forming Carlyle, D’Aniello was vice president for finance and development at Marriott Corp., where he was responsible for valuation of all major mergers, acquisition, divestitures, debt and equity offerings, and project financings. Before joining Marriott, D’Aniello was a financial officer at PepsiCo Inc. and Trans World Airlines.

In addition to his Syracuse education, D’Aniello was a Teagle Foundation Fellow and graduate of the Harvard Business School. Along with his role as a Syracuse University trustee, he is the co-chair of the IVMF’s advisory board and a member of the Chancellor’s Council and the Whitman School’s Corporate Advisory Council.

The D’Aniellos donated $20 million to fund construction of the National Veterans Resource Center (NVRC) on campus. This first-of-its-kind, multi-use facility is dedicated to advancing academic research, programming and community-connected innovation serving the social, economic and wellness concerns of the nation’s veterans and families. The NVRC is scheduled open in 2020.