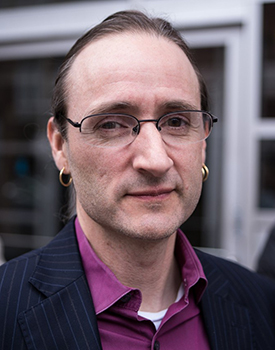 Thomas M. Keck, professor of political science and the Michael O. Sawyer Chair of Constitutional Law and Politics in the Maxwell School, has been named a 2019 Andrew Carnegie Fellow.

As recipients of the so-called “brainy award,” each Carnegie Fellow receives a grant of up to $200,000, making it possible for him or her to devote significant time to research, writing and publishing in the humanities and social sciences. The award is for a period of up to two years, and its anticipated result is a book or major study. Keck’s Carnegie-funded project is titled “Free Expression and Judicial Power.”

Keck, who joined the Maxwell faculty in 2002, is a leading expert on the Supreme Court, American constitutional development, and the use of legal strategies by movements for social change. He is the author of “Judicial Politics in Polarized Times” (University of Chicago Press, 2014), in which he considers whether judges are neutral legal umpires, unaccountable partisan activists or political actors whose decisions conform to—rather than challenge—the democratic will. His previous book was “The Most Activist Supreme Court in History: The Road to Modern Judicial Conservatism” (University of Chicago Press, 2004), which traced the legal and political forces that shaped the court under Chief Justice William Rehnquist. He has written articles appearing in the American Political Science Review, Constitutional Studies, Law and Society Review, and Law and Social Inquiry.

As holder of the Sawyer Chair since 2009, Keck directs Maxwell’s Sawyer Law and Politics Program, an interdisciplinary initiative devoted to advancing teaching and research in the field of law and politics. He also is currently leading a collaborative, NSF-funded project on the political beneficiaries of free expression jurisprudence worldwide.

Keck, who received a PhD in political science from Rutgers University, is a research affiliate at the Centre on Law & Social Transformation, a joint initiative of the University of Bergen and the Christian Michelsen Institute.

The Carnegie Fellows program is the most generous initiative of its kind, having provided $32 million in grants to more than 160 fellows since the program’s inception in 2015; a total of 32 fellows were named for 2019. The program is a continuation of the Carnegie Corporation’s more than 100-year history of promoting the advancement and diffusion of knowledge and understanding by supporting the work of a host of institutions, causes, organizations and individual scholars.

“Andrew Carnegie believed in education and understood its influence on the progress of society and mankind. The Andrew Carnegie Fellows Program is an integral part of carrying out the mission he set for our organization,” says Vartan Gregorian, president of Carnegie Corporation of New York and president emeritus of Brown University. “Over he past five years, we at Carnegie have been very impressed by the quality, range and reach of our fellows’ work. This year is no exception. We salute this year’s class and all of the applicants for demonstrating the vitality of American higher education and scholarship.”

A distinguished panel of 16 jurors chose the fellows based on the quality, originality and potential impact of their proposals, as well as each scholar’s capacity to communicate the findings to a broad audience. They considered a total of 273 nominations.